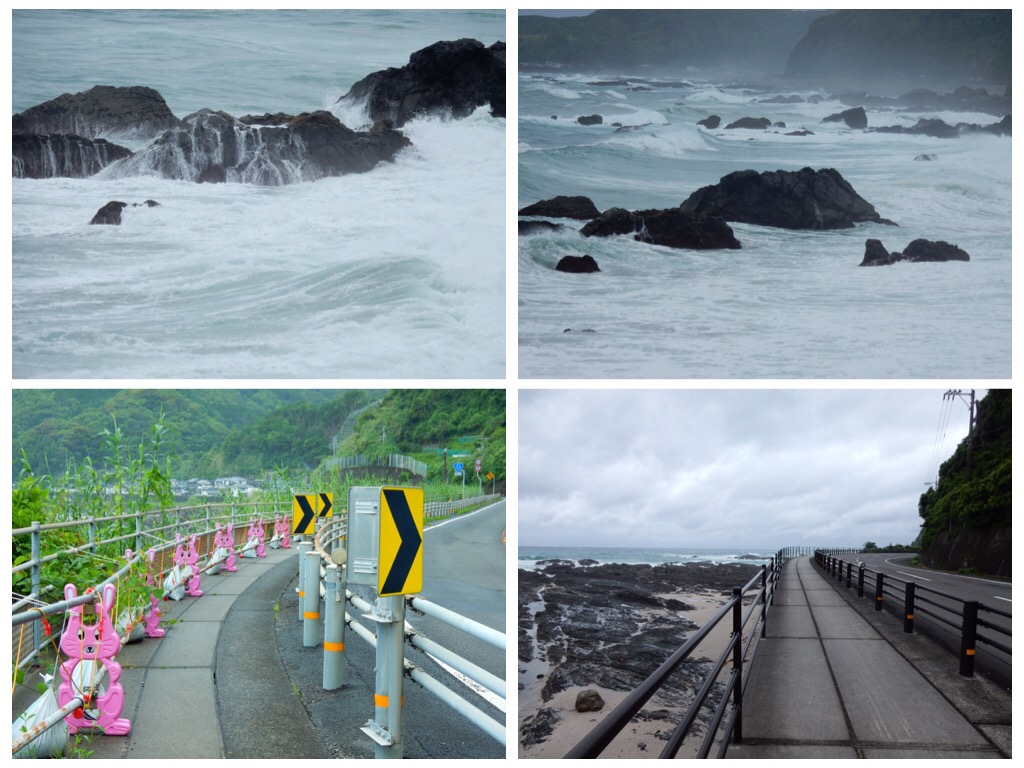 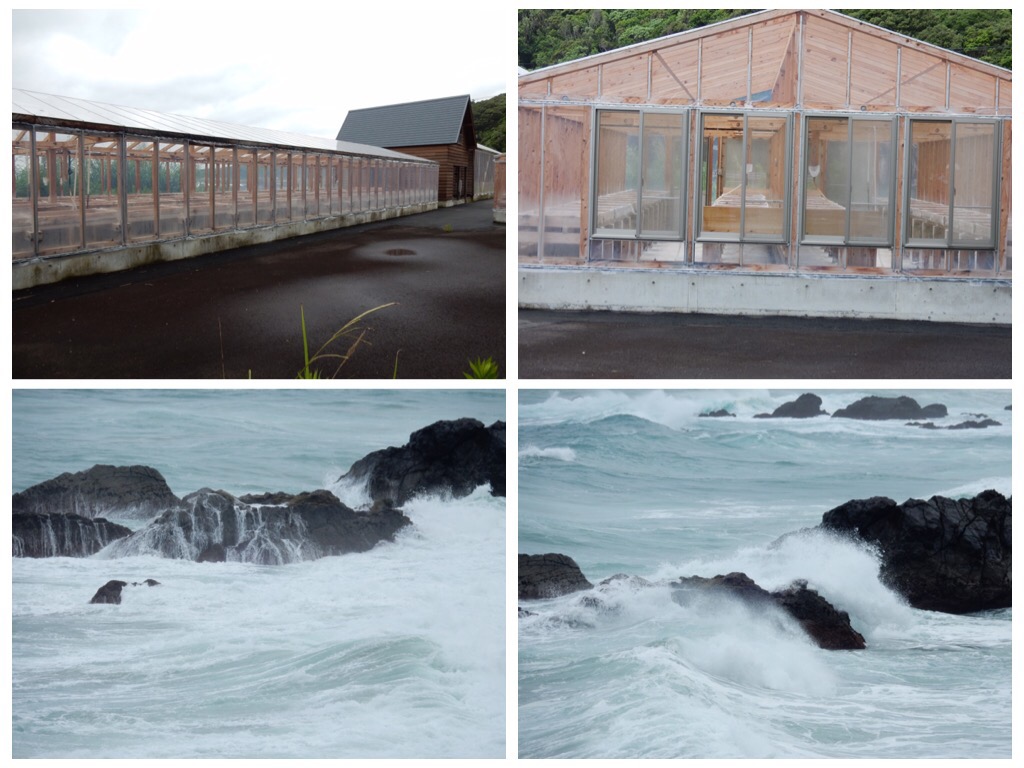 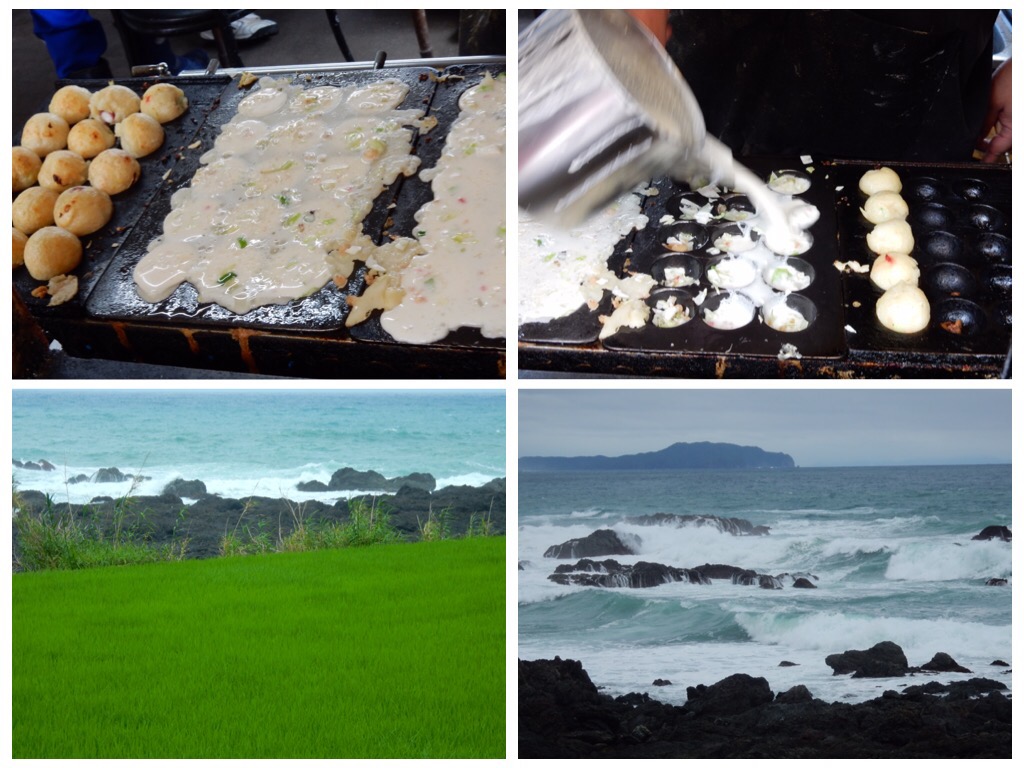 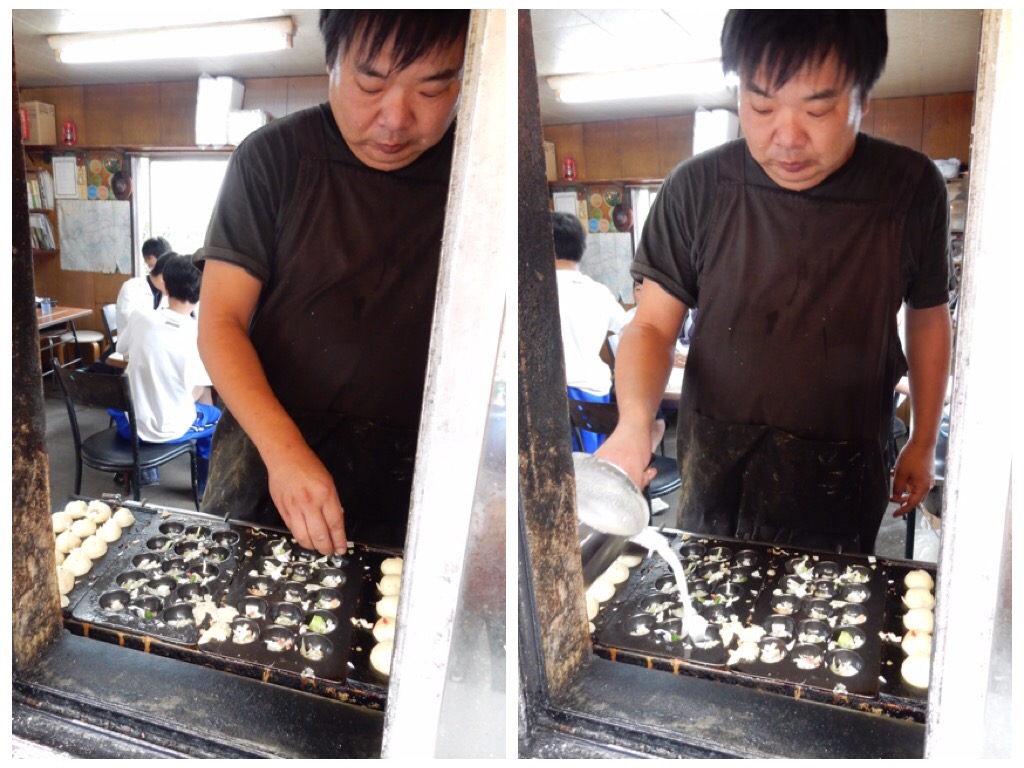 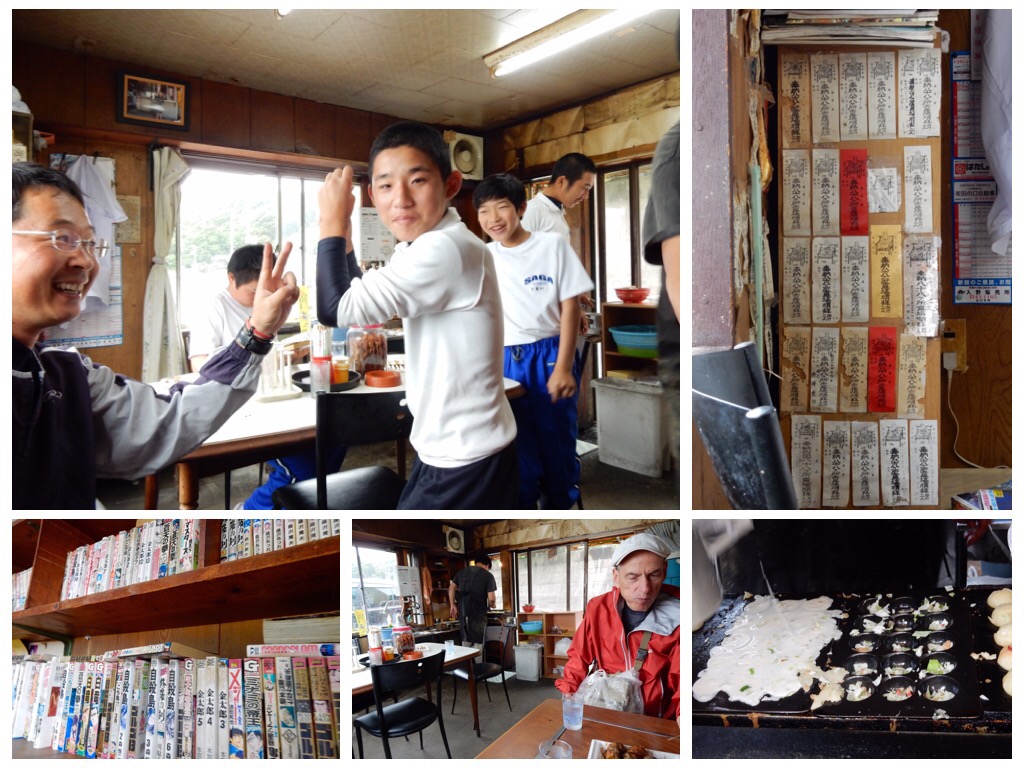 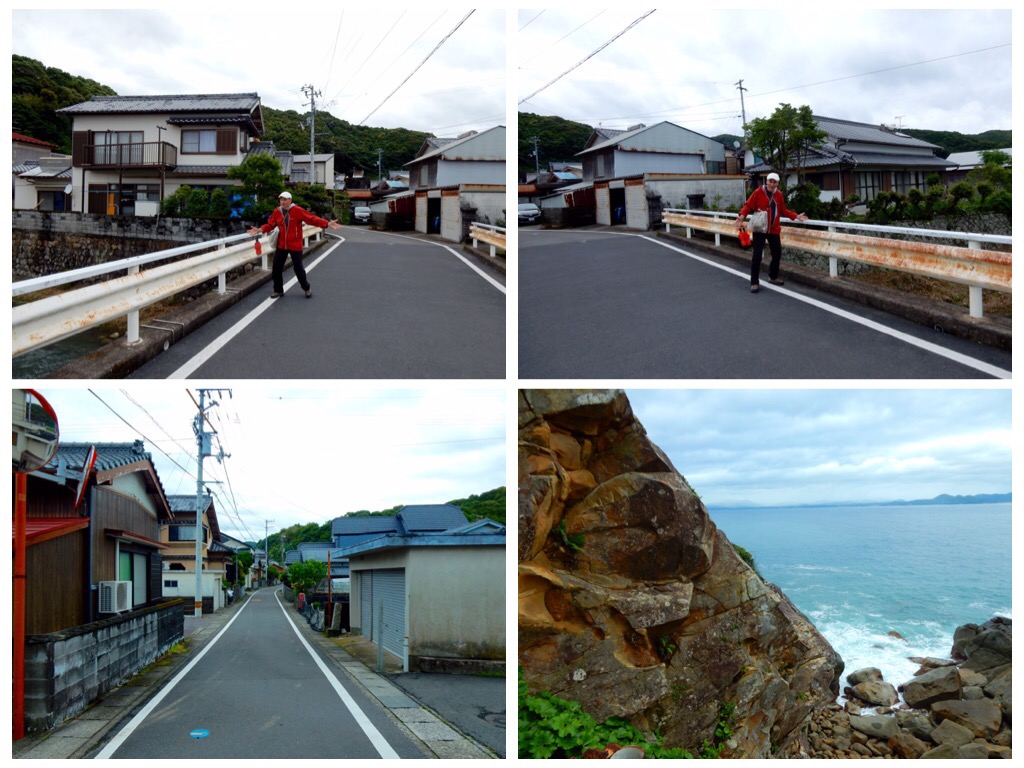 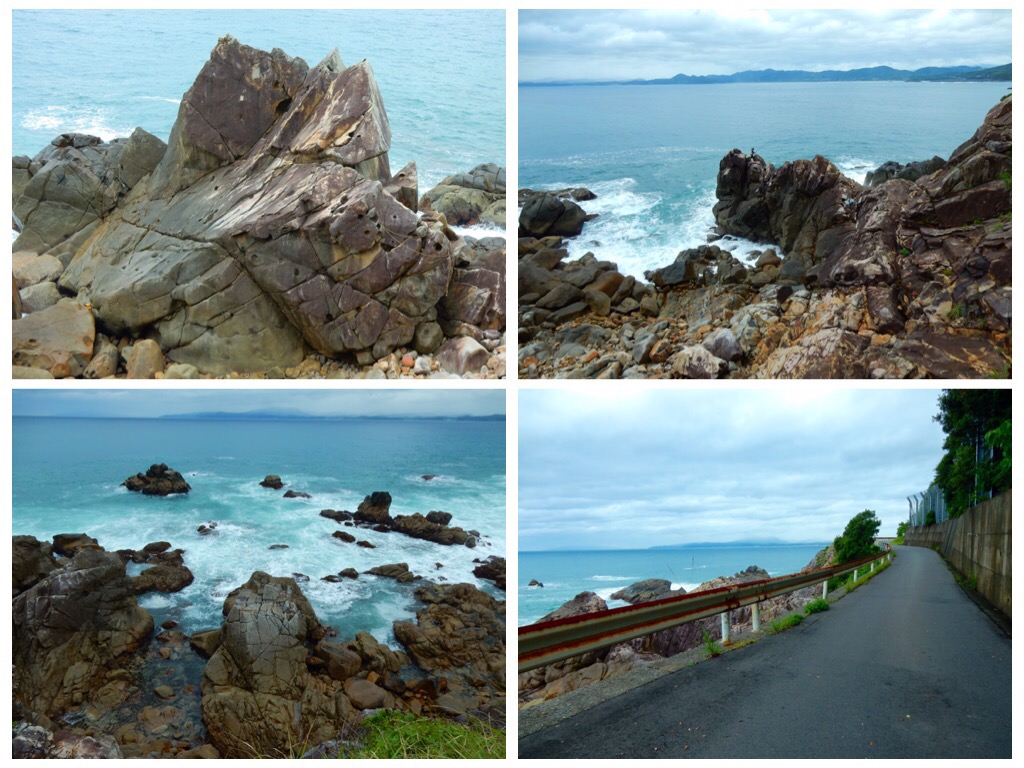 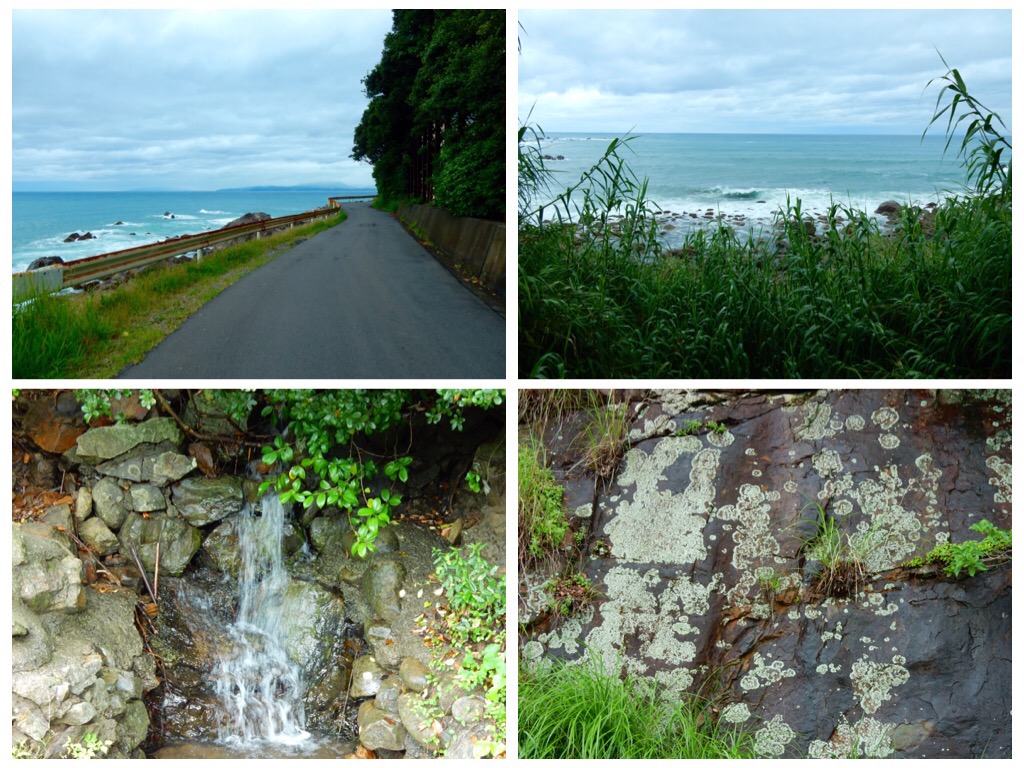 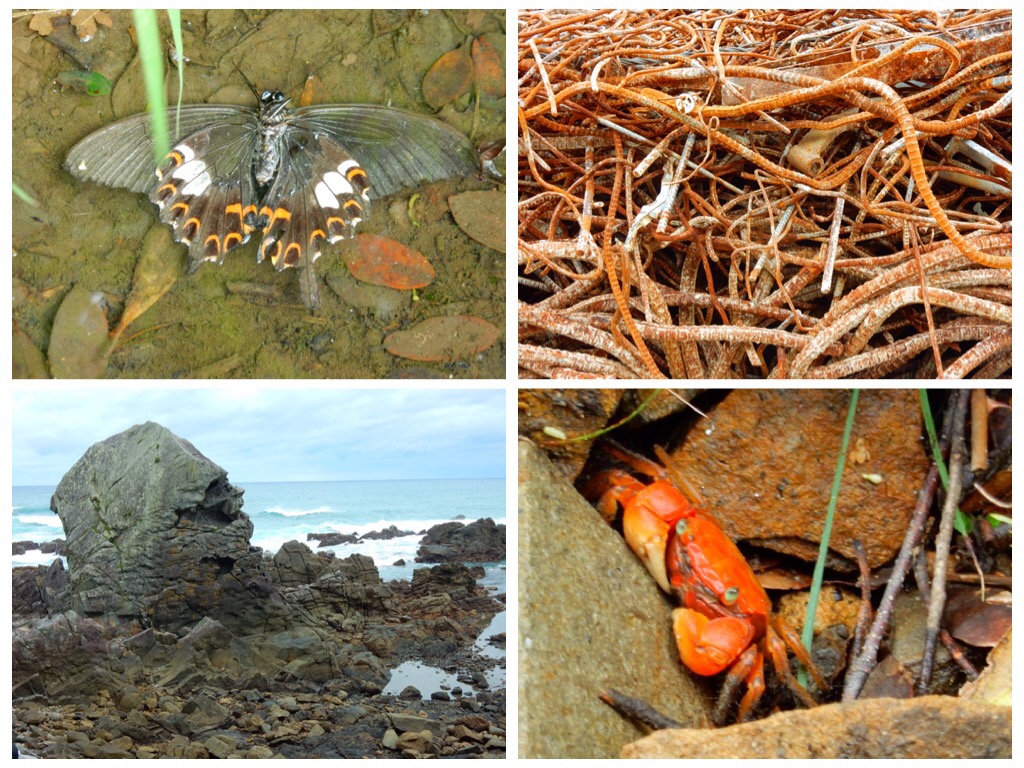 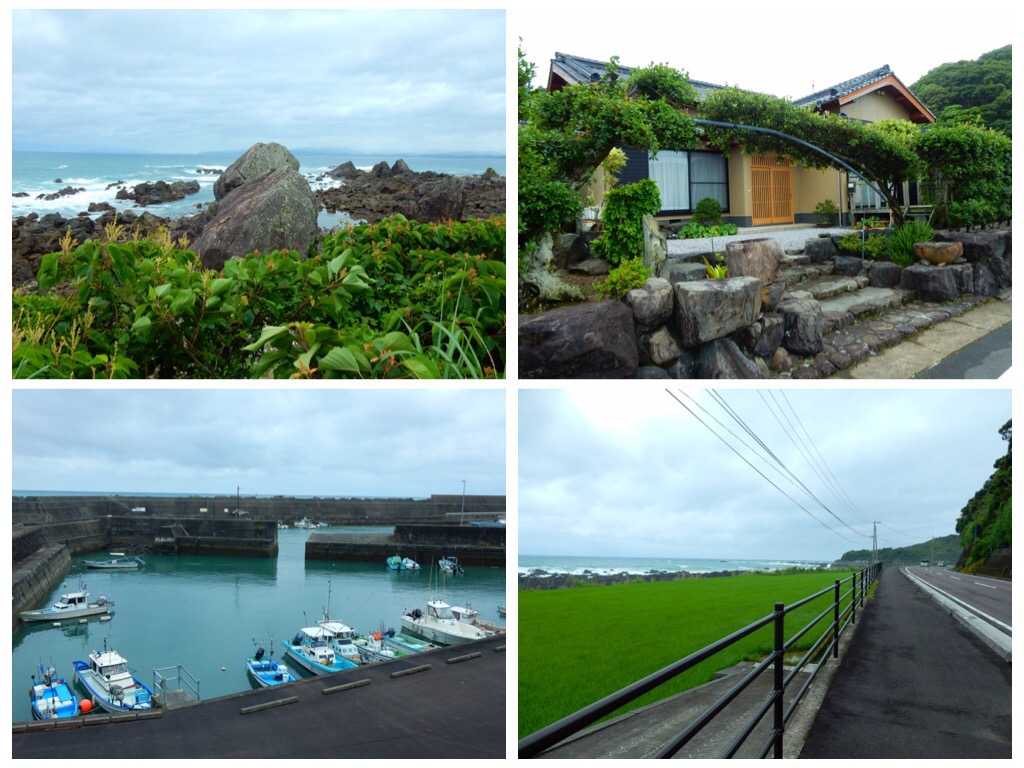 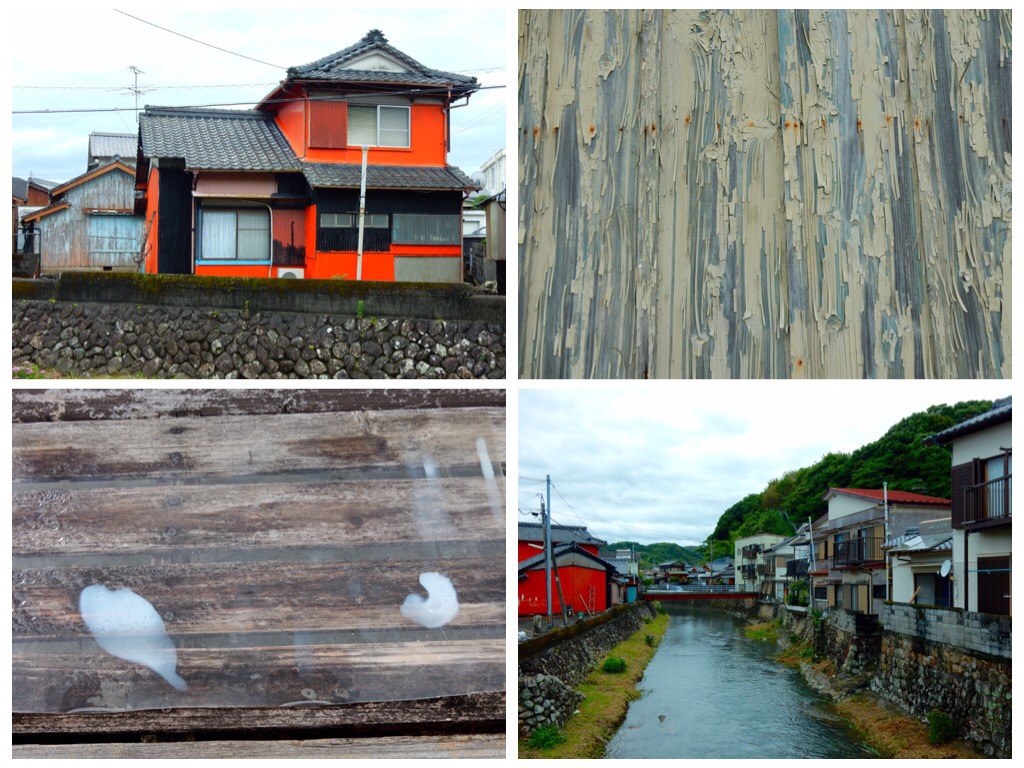 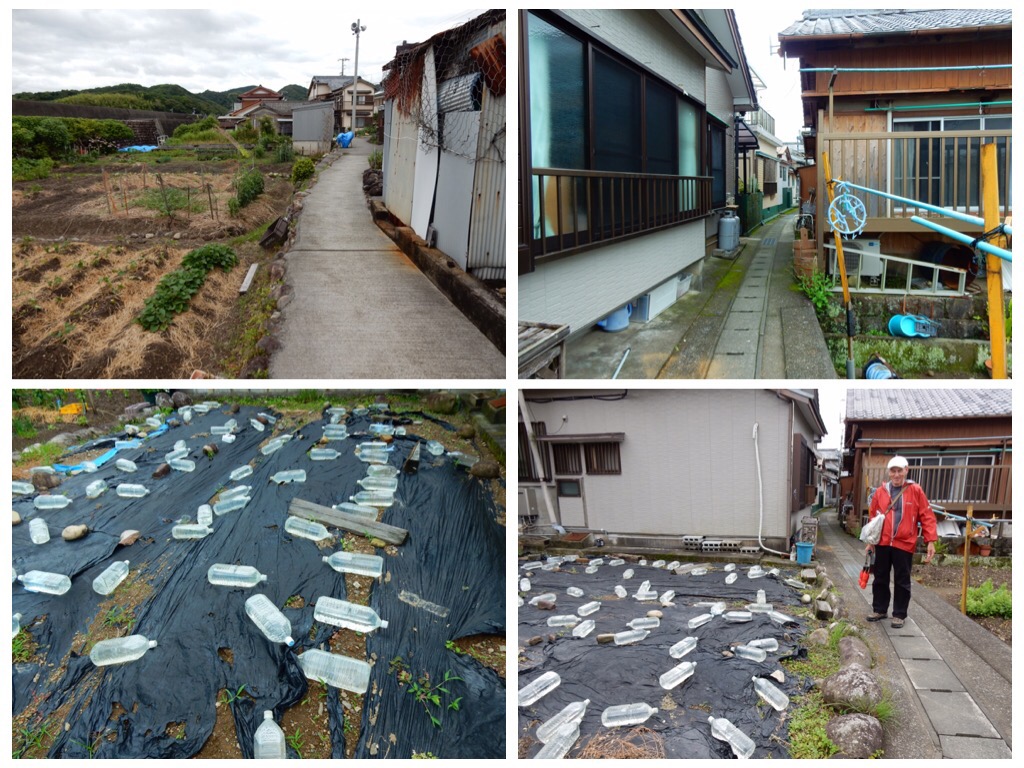 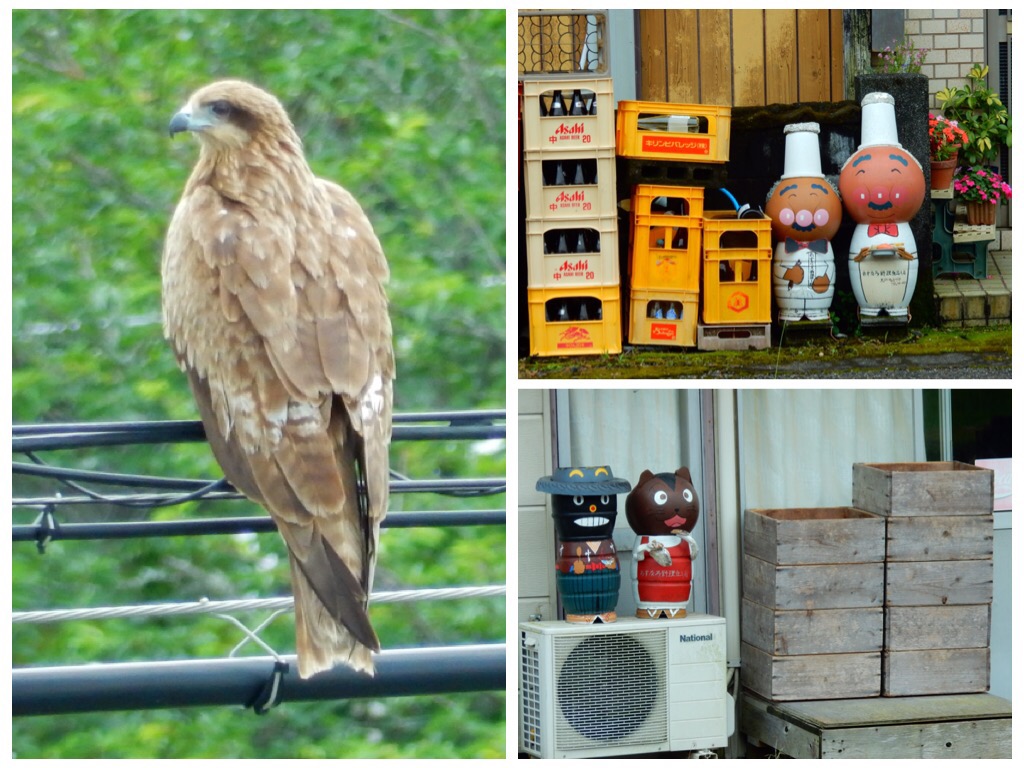 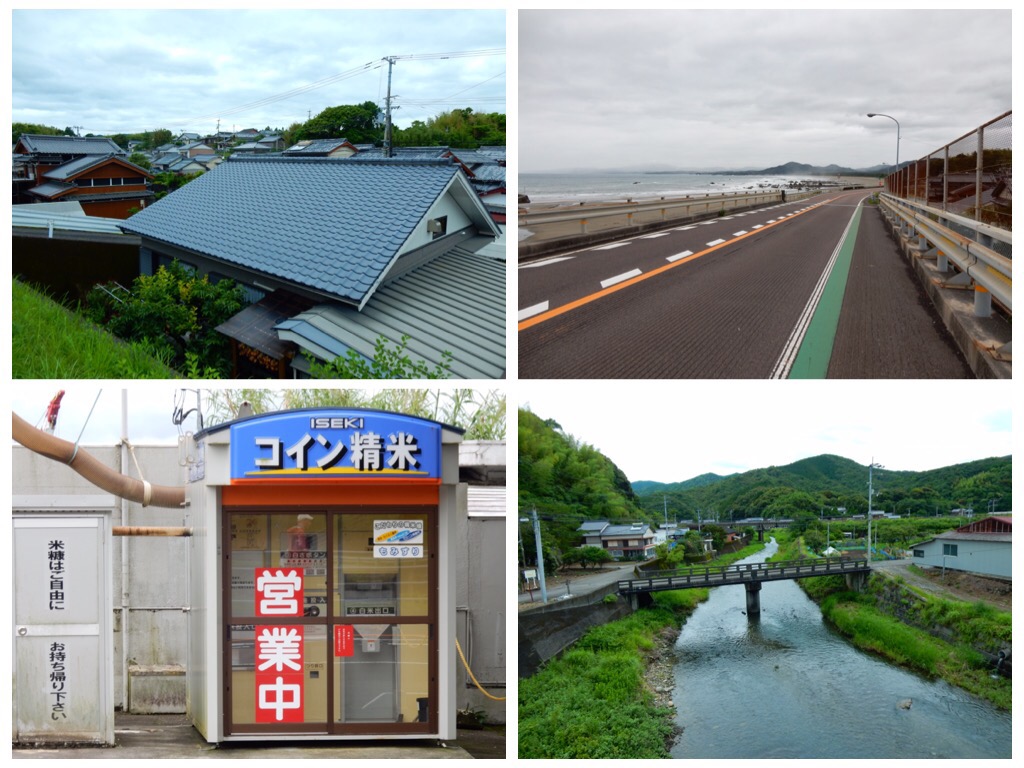 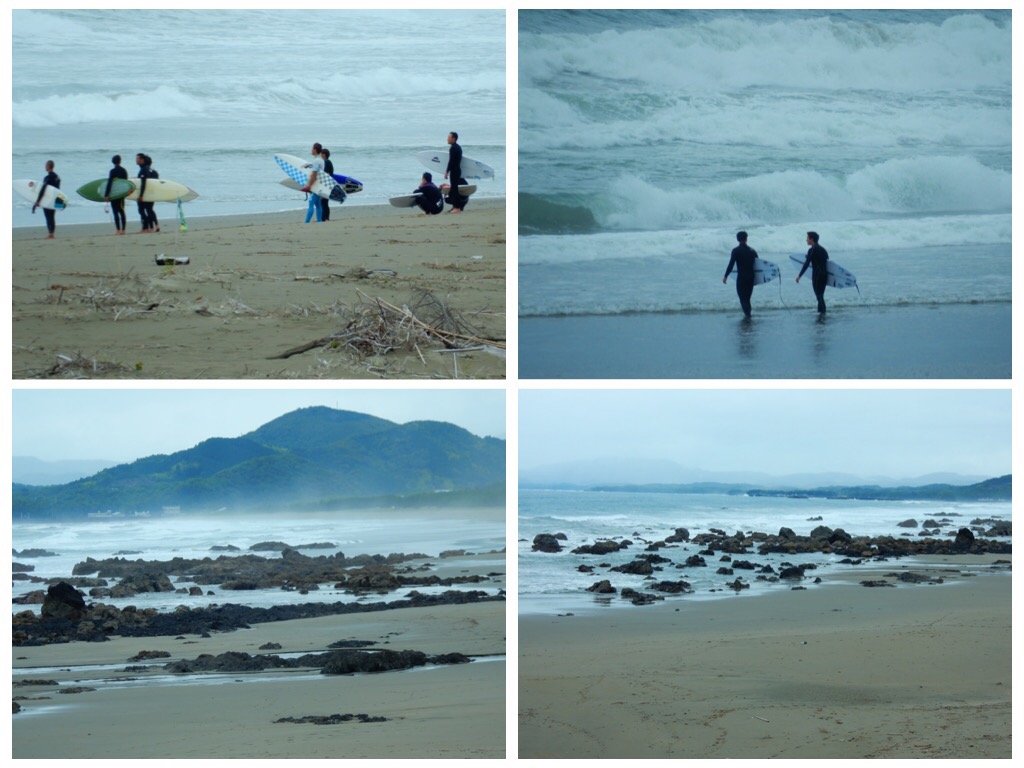 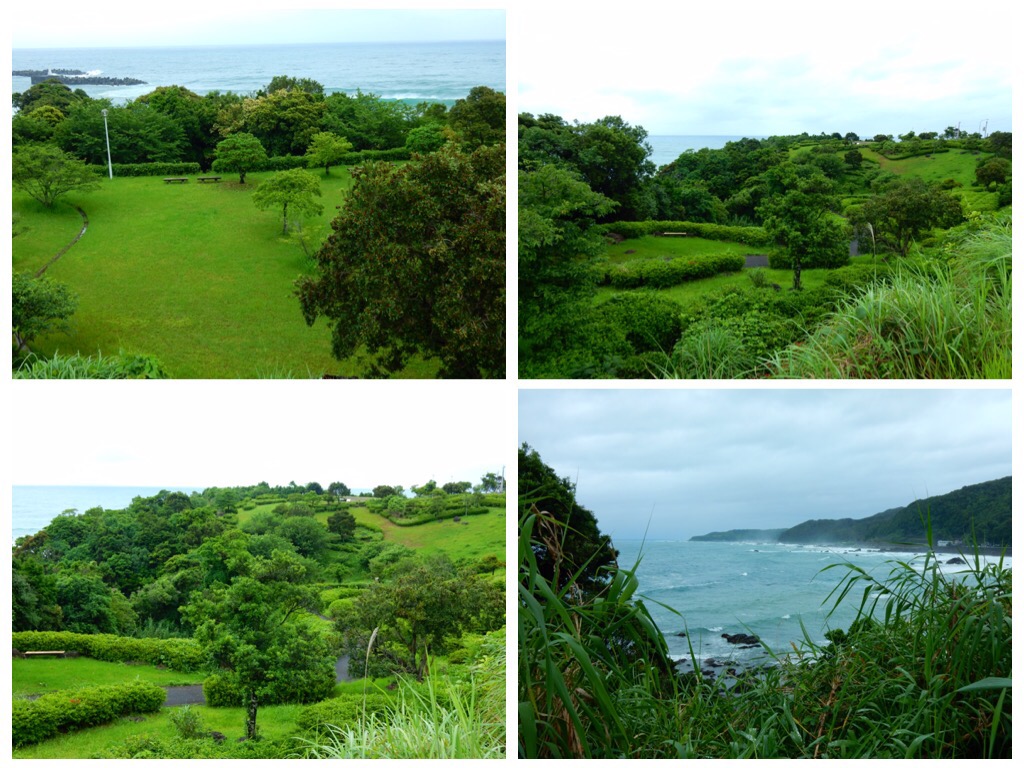 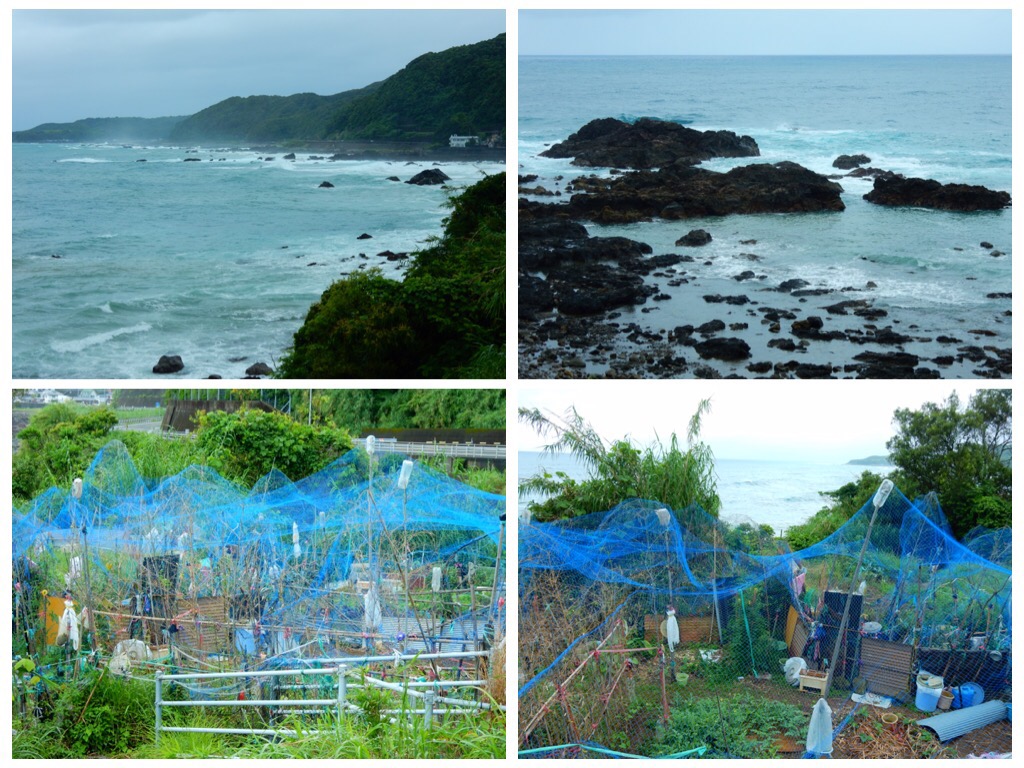 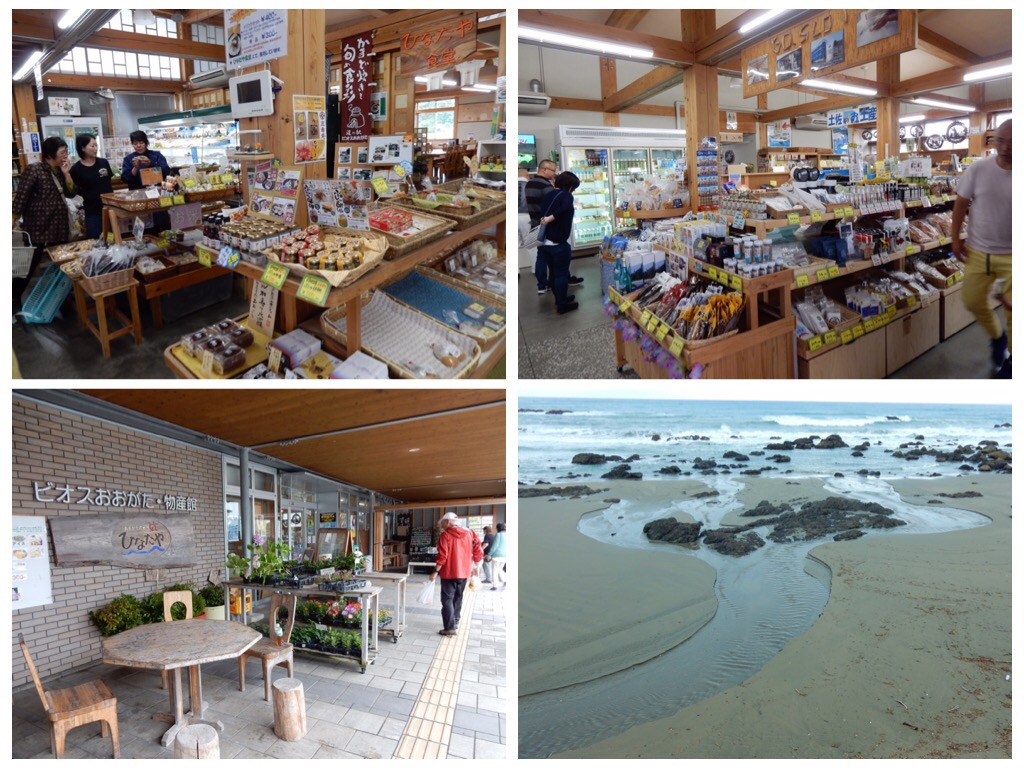 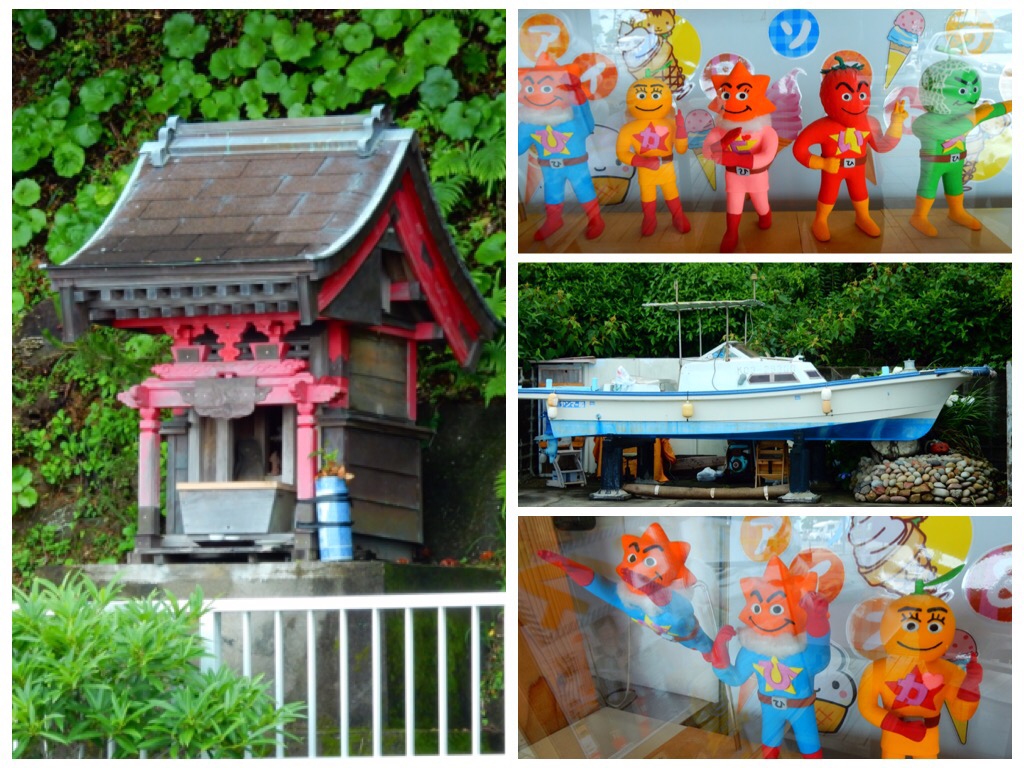 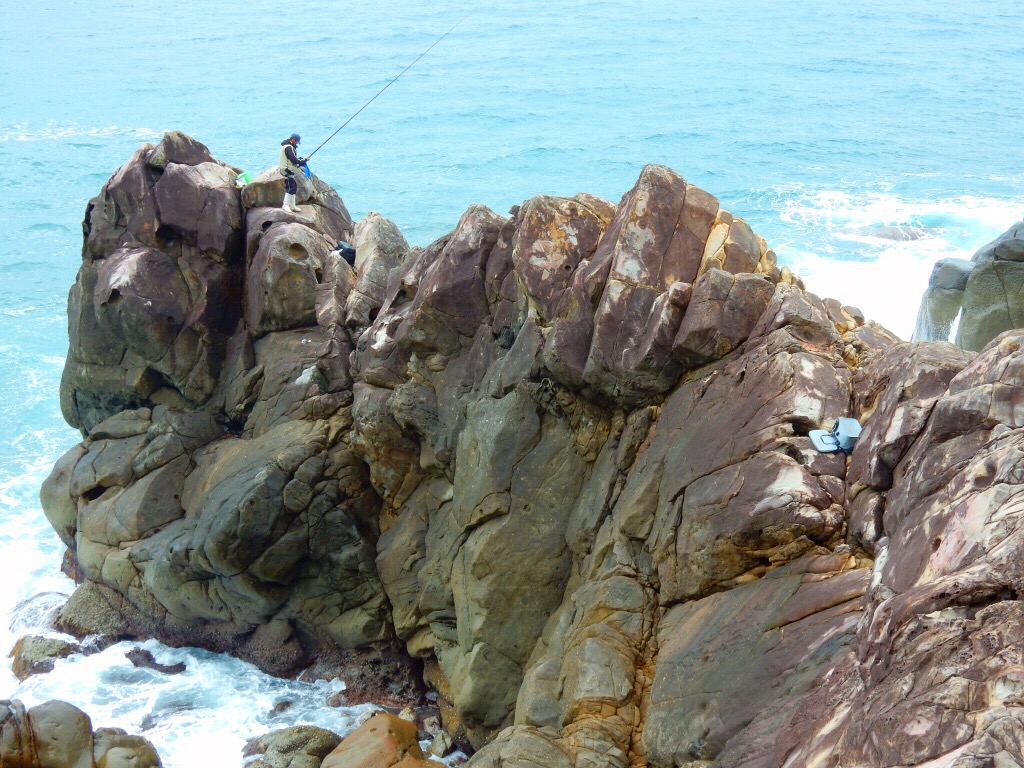 After breakfast, we needed to take the train from the Nest West Lodge back to Tosa-Saga, where we had stopped walking the day before.

The hotel manager looked very worried when I approached him at the front desk.
Many Japanese people learn English, and understand it well, but feel quite nervous or shy about saying a single word or making a mistake and appearing foolish.

He was SO relieved when I asked him in Japanese when the next train leaves to Tosa-Saga.
He told me that it was in forty minutes, so we went back upstairs to our room and I changed out of my Yukata into my rain gear.

The forecast for today was for a cloudy and rainy day with an eighty percent chance of rain, so we dressed in our rain pants and rain coats, covered our day packs with plastic, took our umbrellas and headed to the train.

The hotel manager was waiting for us at the front door.
He had already pulled the hotel’s van to the front, and he was very nervous that we might miss the train.

We wanted to refuse the ride and walk to the station, but it seemed impolite to do so. So we accepted his offer of a ride.

The train dropped us off at the Tosa-Saga train station, and we started walking south along the rocky coastline, back towards Tosa-Irino where our hotel is located.

We passed by small rusty villages and because it was a Sunday, most of the small shops were closed.
The locals were either surfing, or doing community volunteer work – cleaning the streets, gardening, tidying up the gravestones, or scraping moss from the seawalls and by the sidewalks.

We also witnessed this spirit of community volunteerism when we stayed in Sapporo, Hokkaido last year.
On Autumn weekends, we saw groups of people volunteering to collect dry fallen leaves in Maruyama Park.
We saw them helping to plant annuals along the main streets, and we befriended a lovely elderly couple, who walked early mornings up the steep hill that we cycled down, collecting trash or cigarettes butts from the side of the road.

The rain was not much more than a drizzle, and I actually enjoyed the walk.
I had an experience today that I have never had before.

At one point, I felt a small sharp pinch on the top of my left foot.
This pinch, which at first I thought was a small thorn or a plant sticker that had stuck to my sock, quickly turned into a most pleasurable sensation that sent waves of pleasure up my whole body, to the top of my head.

These waves of pleasure occurred a few more times, and then they stopped.
Later, I stopped to check, but nothing was in my shoe or stuck to my sock.

As we continued to walk, I marveled at what had happened….. Could it be that walking was MEANT to produce a pleasurable sensation?
Could it be that our human feet were designed to sense the earth beneath them and transfer energy and pleasure to the whole body?

Later, after we had walked for 16 kilometers, the bottom of my feet hurt for a moment, and then the same waves of pleasure ran up my spine for a few minutes.
Again I marveled at this new and most strange and unfamiliar sensation…..

We passed by a salt making workshop, which invites people to learn how to extract salt from sea water.
They were closed today, but we could see the wooden trays they use to filter stones out of the salt and there was much white salt on the floor of the workshop.

Some surfers were braving the waves, but most others were hanging out on the shore.
The day felt cooler, and it was hard to remember that just two days ago, we had felt so hot.

We passed by what looked like an ATM booth, but is actually a coin operated grinder, to grind rice.
You bring your sack of rice and you put coins into the ATM-Grinder machine, you choose the level of fine grind that you want, and it grinds your rice into flour.

Rice flour is used to make many things, among them rice crackers, Mochi, rice cakes, sweets, noodles and more.

There is a traditional street food in Japan, that is usually eaten by the seashore, but nowadays is eaten everywhere, called Takoyaki – Octopus balls.
Takoyaki are grilled on a hot griddle that is shaped like balls, and the mixture is poured into this griddle.
The octopus is just a tiny piece added for flavor; the majority of it is flour and egg with a sauce and different toppings.

We passed by some Takoyaki stands, and we chose to have a snack at one of them.
There were a few kids inside eating their Takoyaki balls and reading comic books that the owner of the stand had on his shelves.

We had never tried Takoyaki before.
We always try to pass up junk food, but today in front of the rugged cliffs and the strong ocean waves, trying a small order of Takoyaki in a tiny hut, just felt right.
It actually tasted very nice.
I was expecting it to taste like fried dough covered in sauce, but it tasted more like a dumpling, soft and pleasant.

We took a longer, more scenic route today, heading south on an abandoned road by the southern tip of the peninsula.
We saw a fisherman wearing a life preserver, standing on very tall rocks, casting his line into the waves.
He must have been a very experienced fisherman, to even attempt to climb onto those rocks.

At the edge of the park where our hotel is located, we entered a farm store selling local produce, herbs, vegetables, locally caught fish, and all sorts of home made products and foods.

These stores operate much like farmers markets, and the local people bring produce from their garden or crafts that they have made and foods that they’ve baked, to sell in the shop.
When things sell, they get paid.

Many tourists and Henros stop and buy food and local produce to take home.
We bought some garden grapefruits, home made cookies and seaweed crackers.
We sat at a table outdoors, and enjoyed them for lunch.
Nearby sat a bicycle Henro who ate copious amounts of food.
He must’ve been very hungry and happy to find this place to rest and eat.

At our hotel, we had a late afternoon tea and asked the front desk to help us with making more reservations for the next week.
The lady was more than happy to help.
Later we soaked in the hot baths, had a good dinner and did our laundry.

It is common knowledge that great things can be achieved in life, by taking many small steps in the right direction.
It is the same with a long pilgrimage.
At the beginning, it seemed impossible that we could walk such a great distance, but all we needed to do was to break down the distance into small, bite-size chunks.

We decided to walk 20-26 kilometers every day, which we do in about 6 hours, and it still leaves us time to enjoy the landscape that we are walking through, talk to the people we meet and contemplate ideas along this symbolic journey.

And now I look back at the map and realize that we are doing well.
My feet are healed and are even giving me pleasure, and most of the time, I feel great and I am having fun…. Who knew it could be this way……

Temples visited:
None
Overnight at the Nest West Lodge inside the Tosaseinan Park in Irino