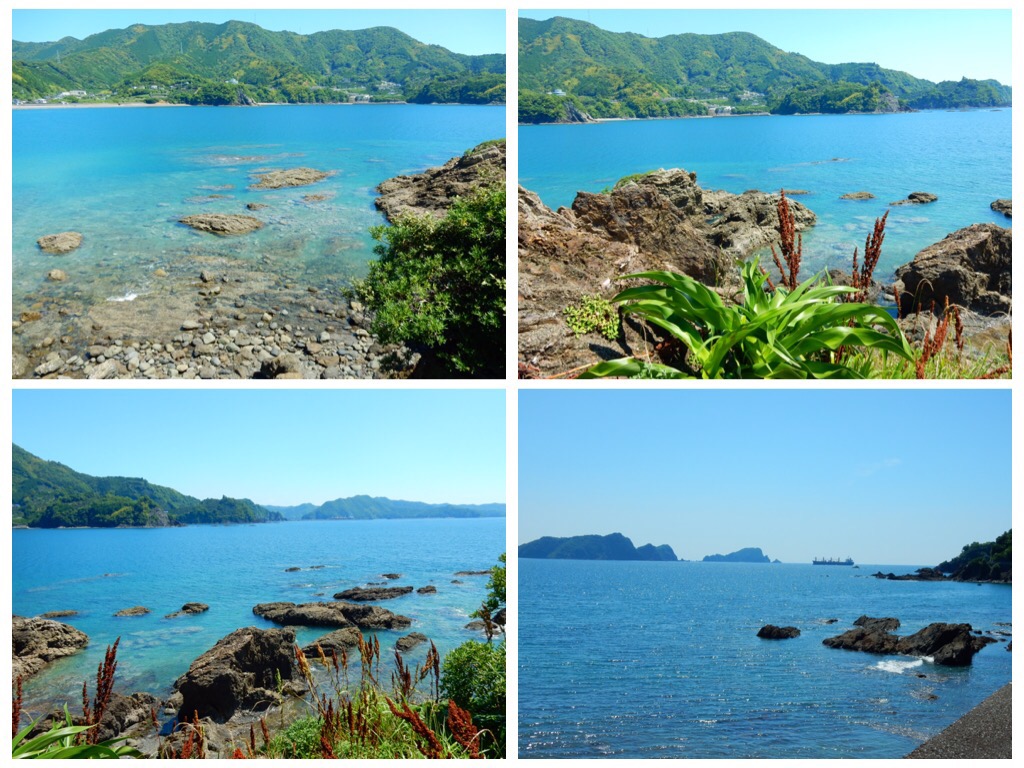 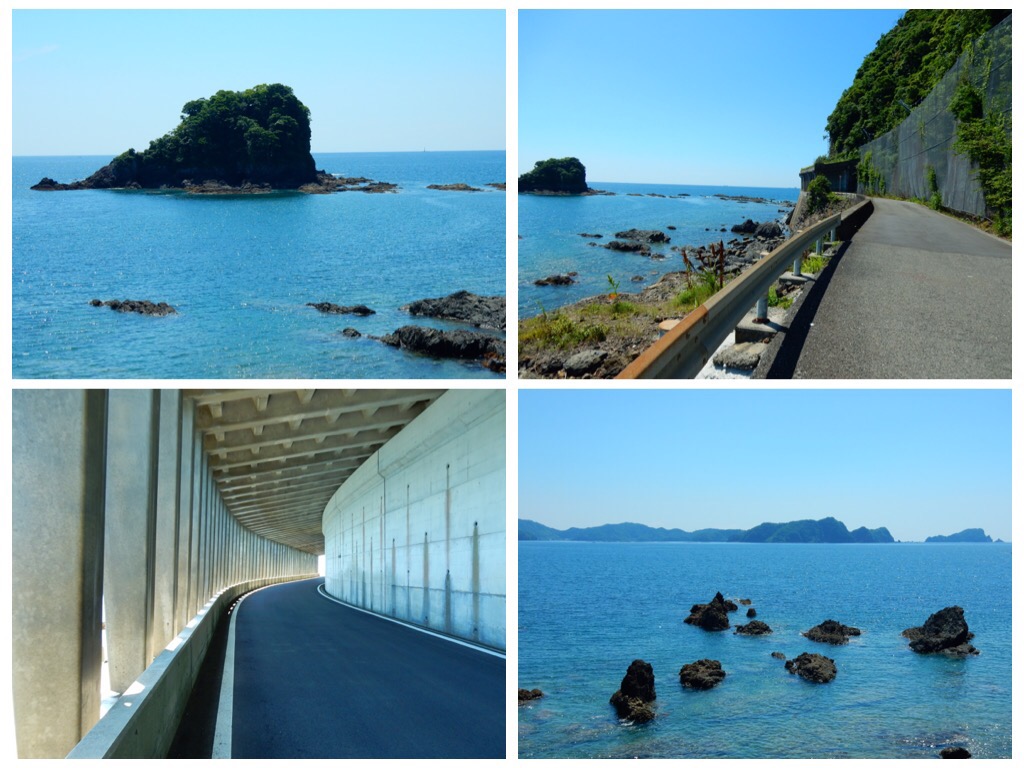 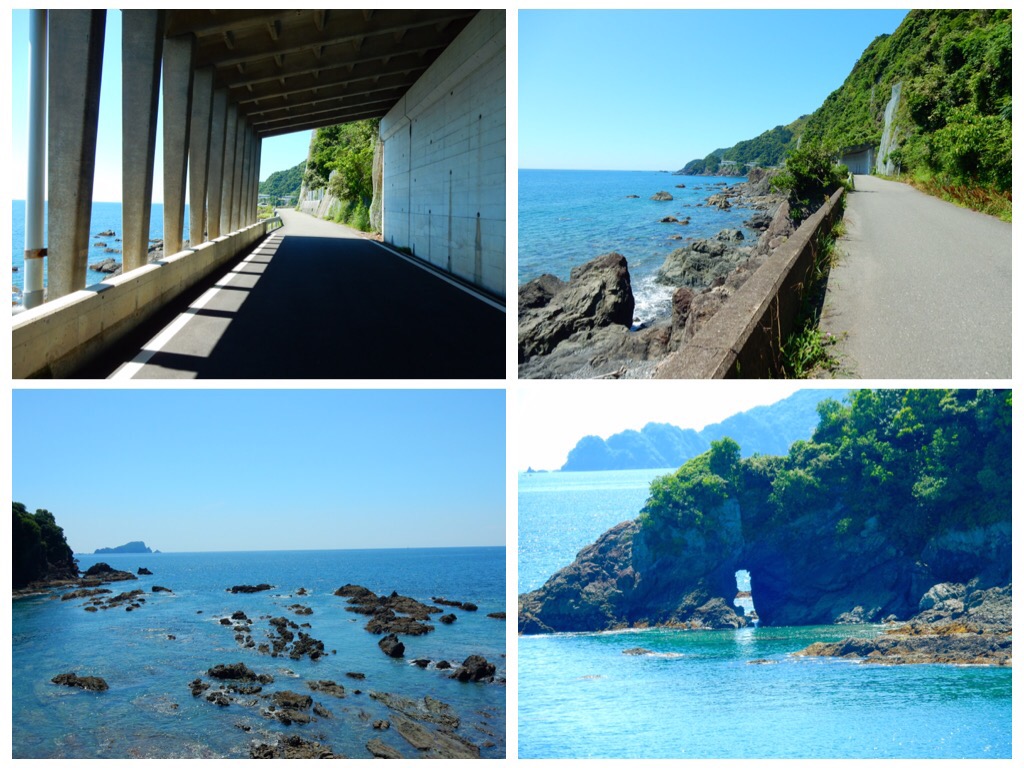 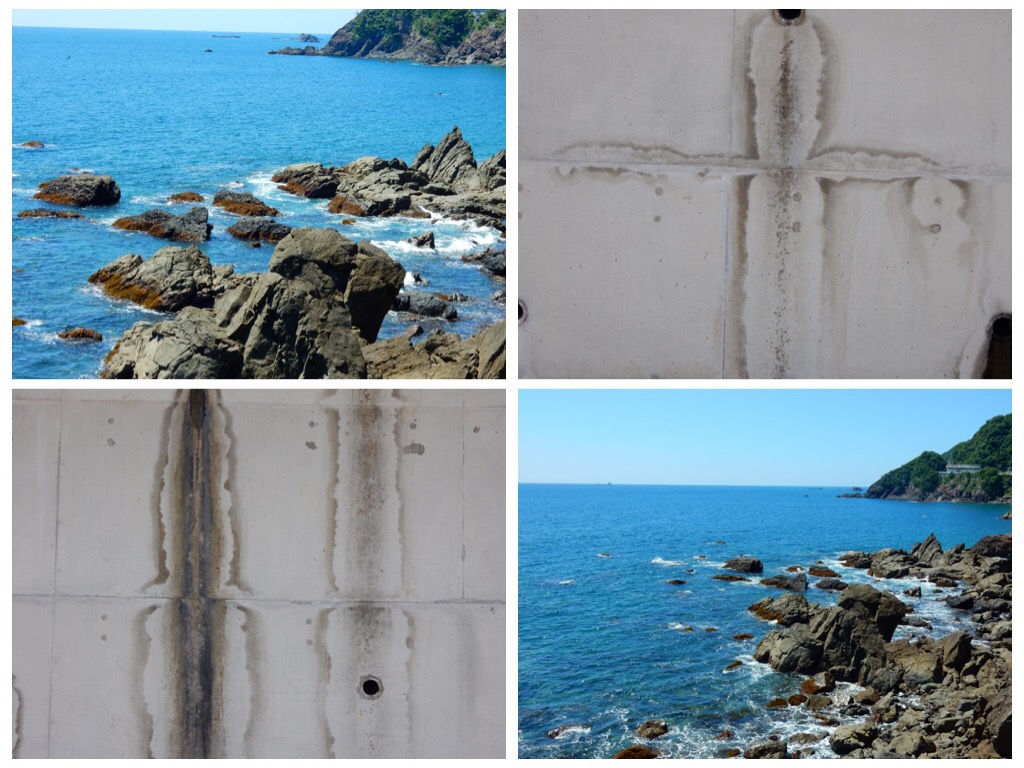 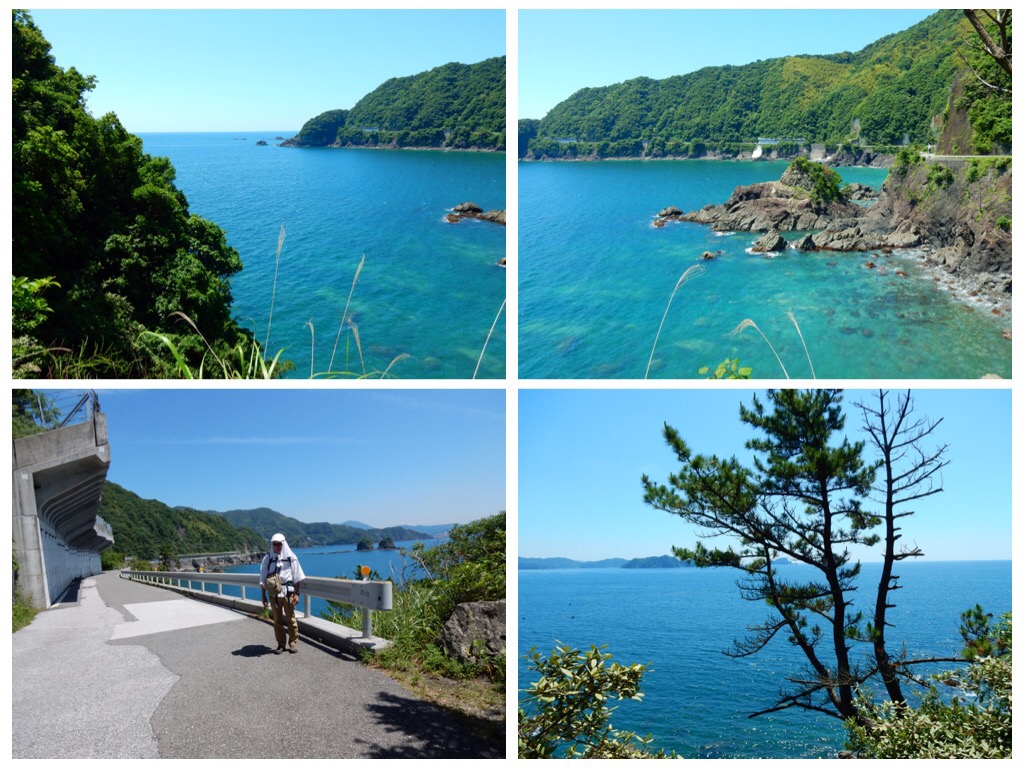 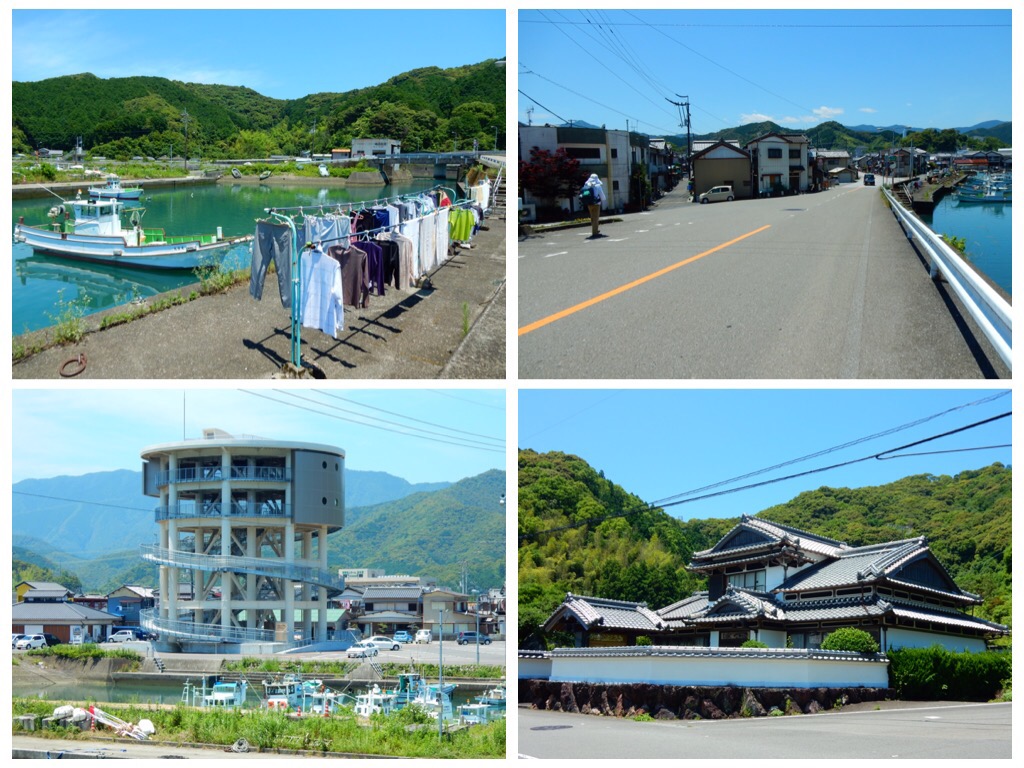 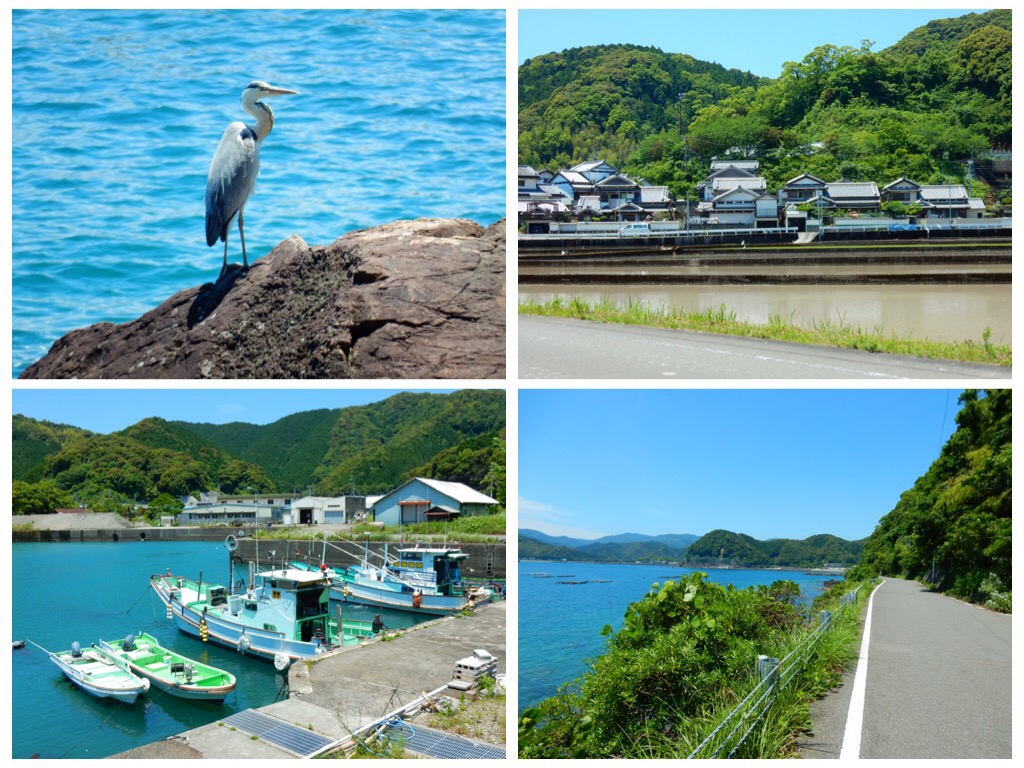 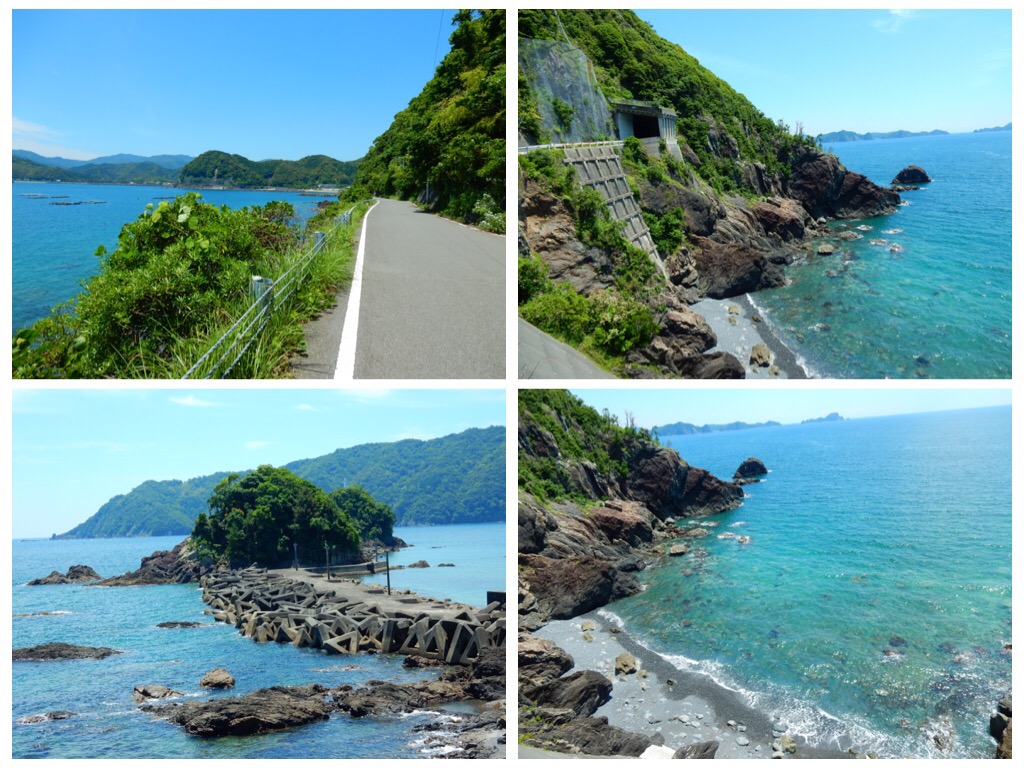 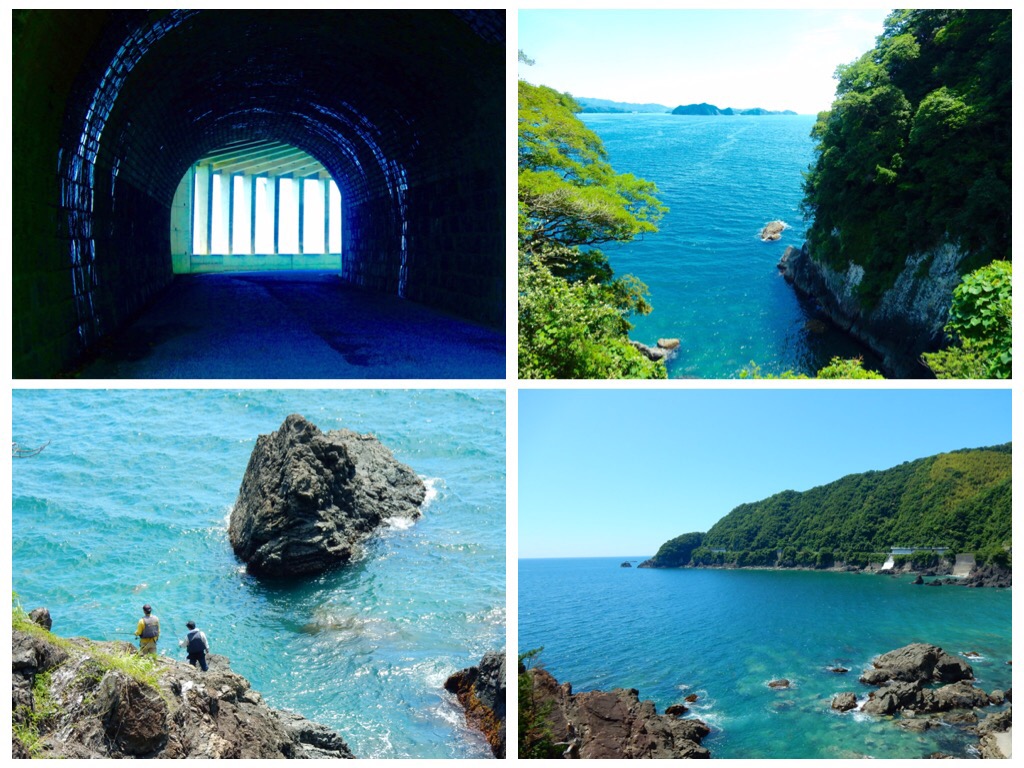 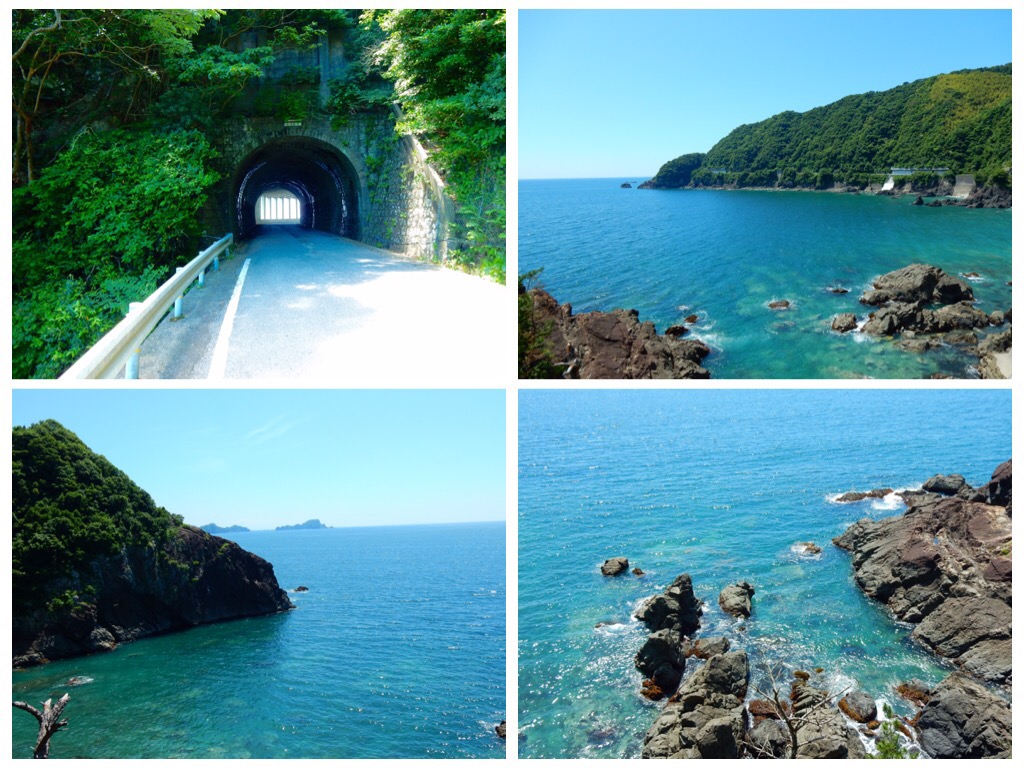 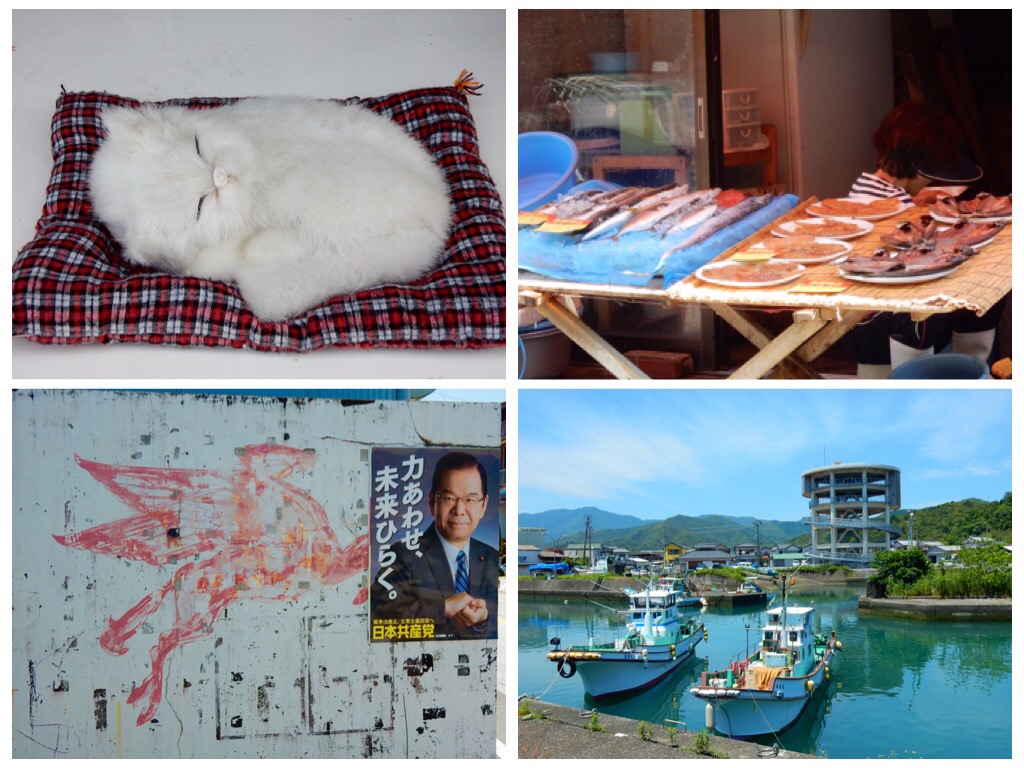 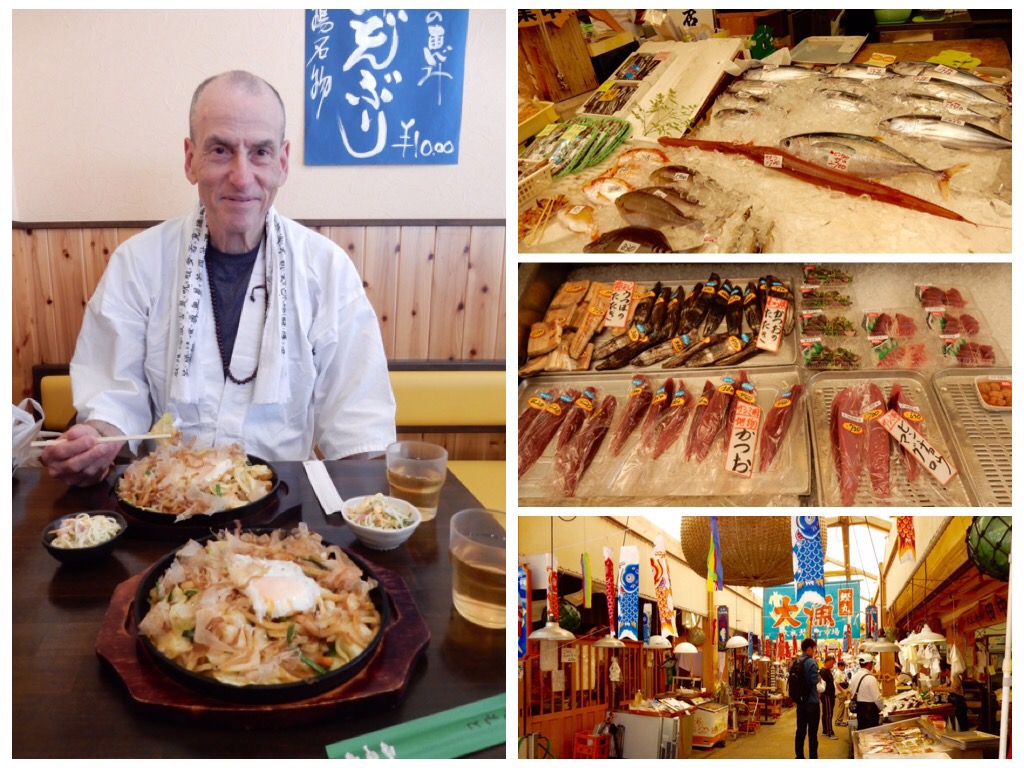 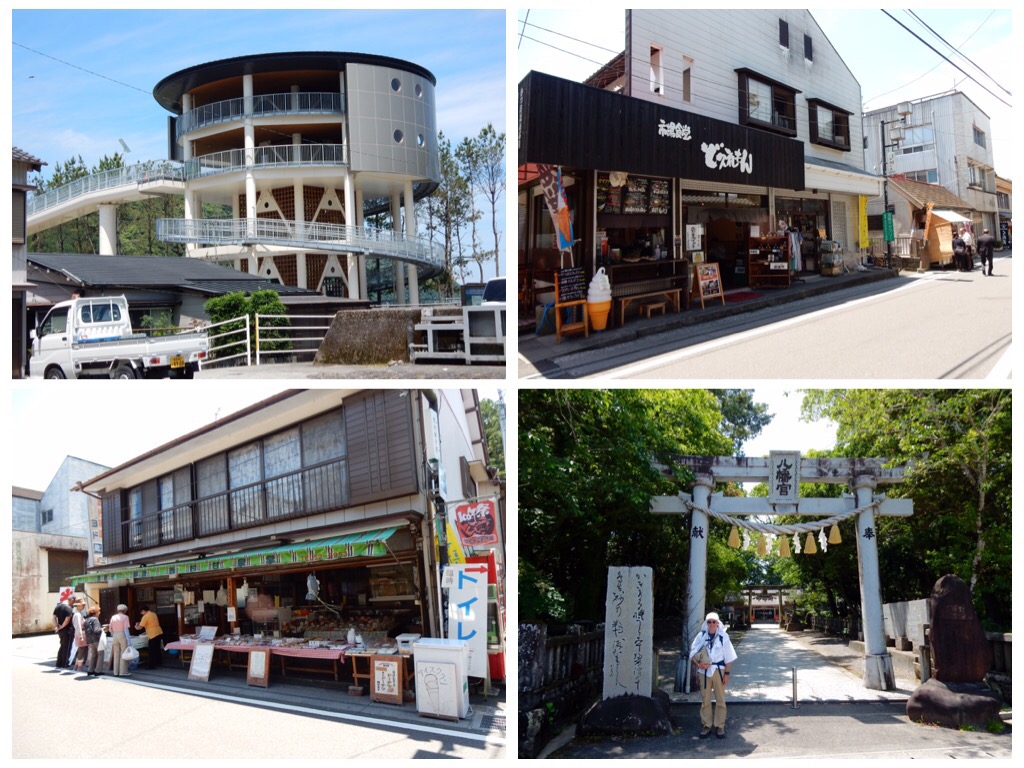 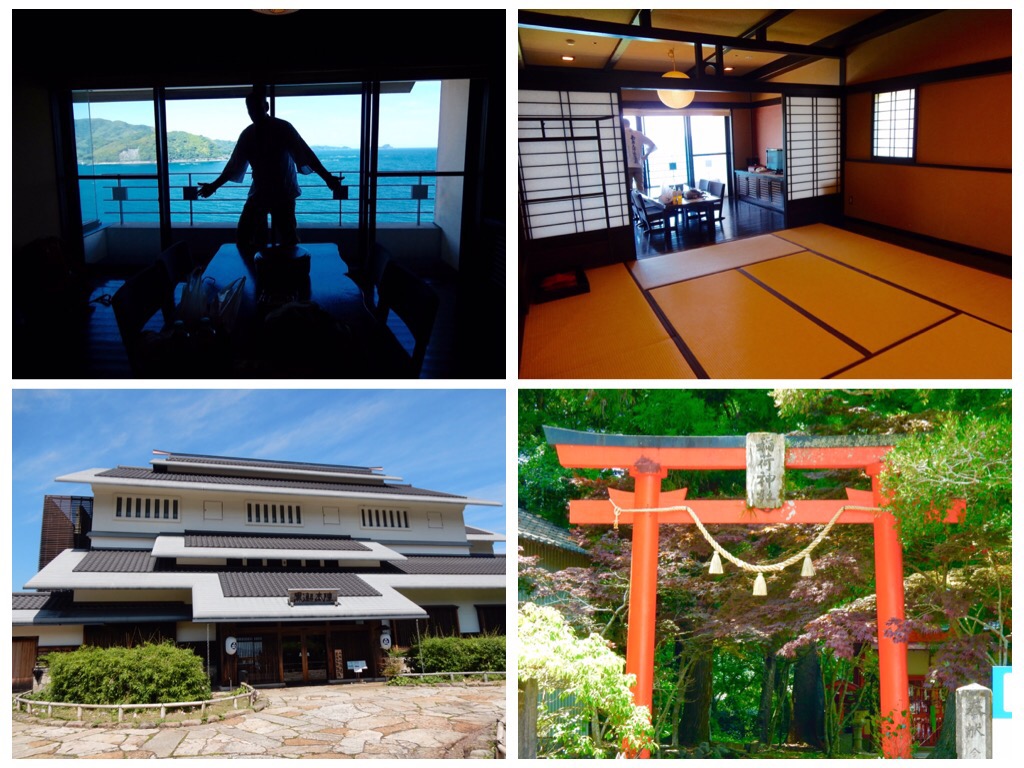 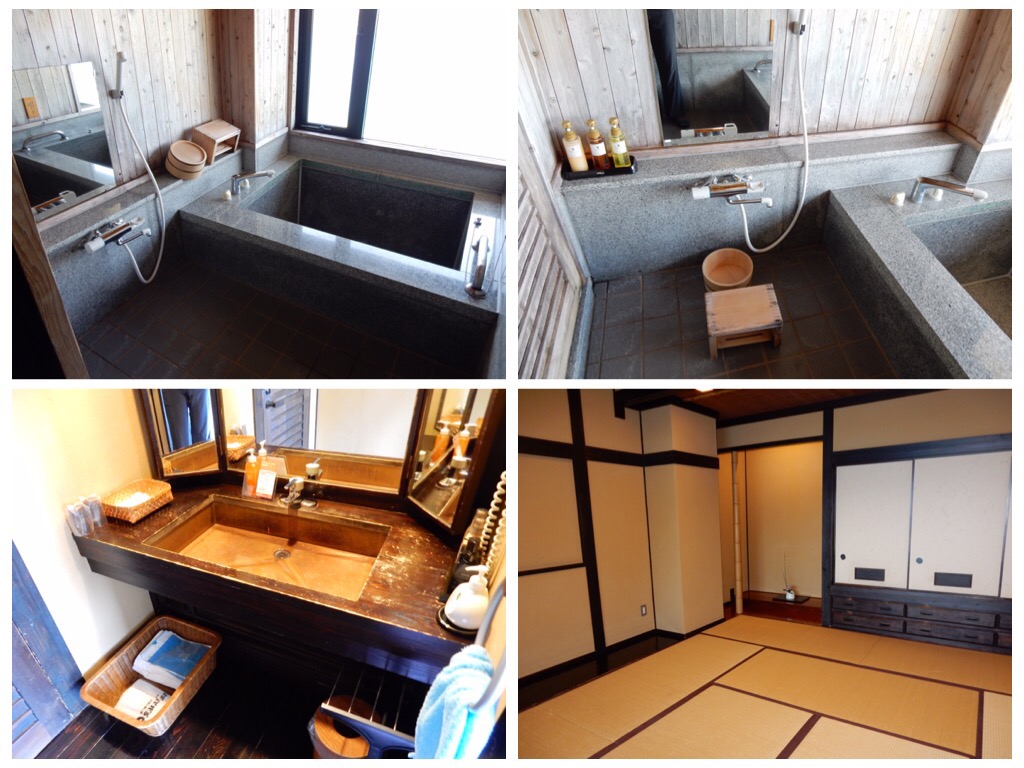 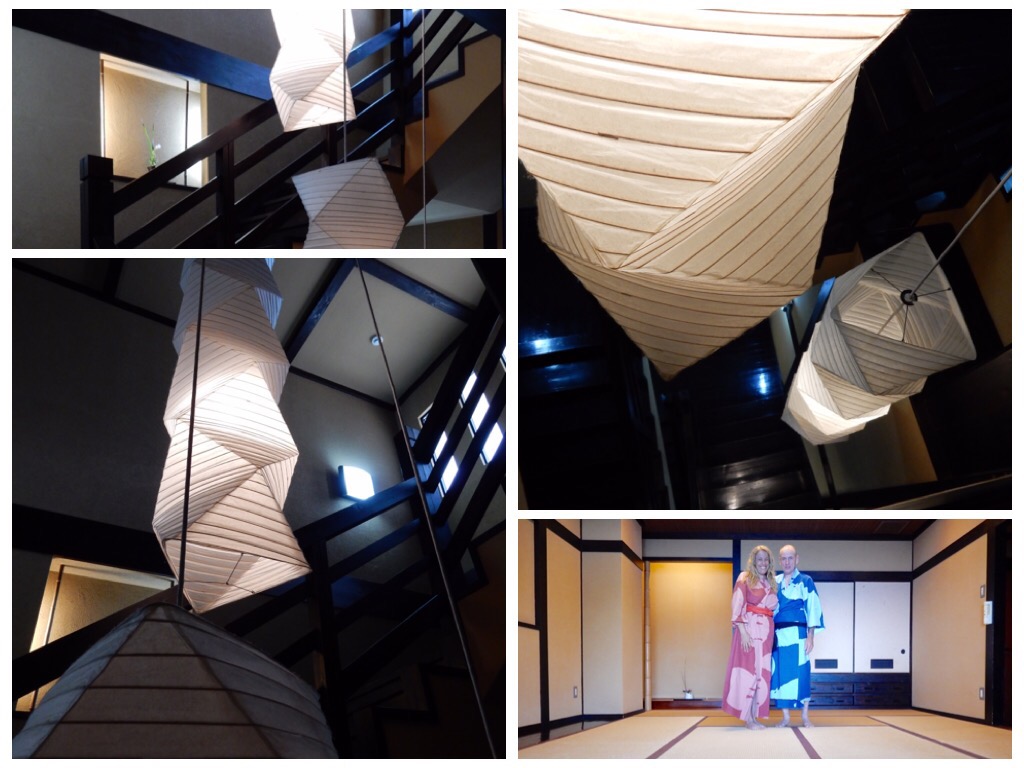 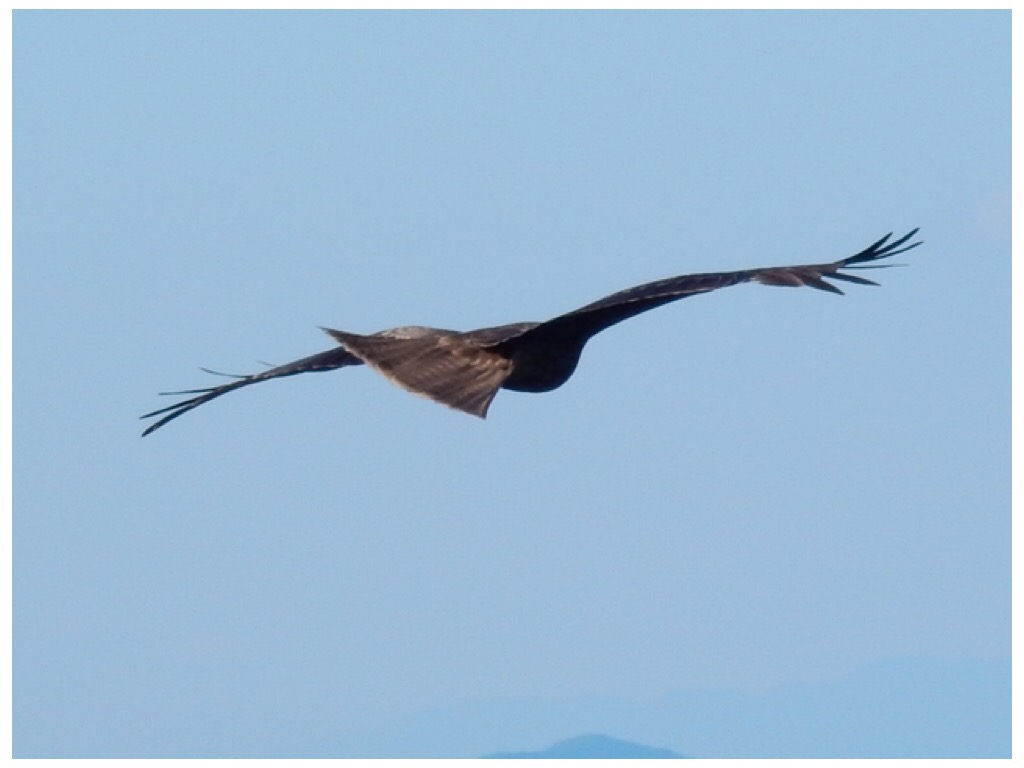 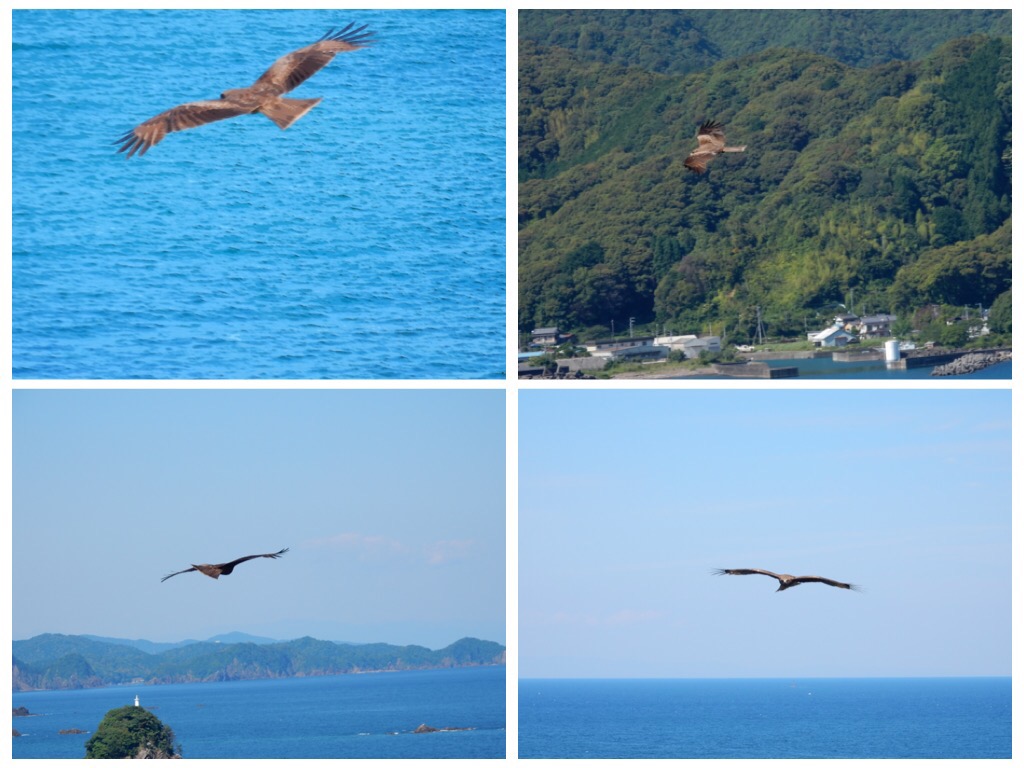 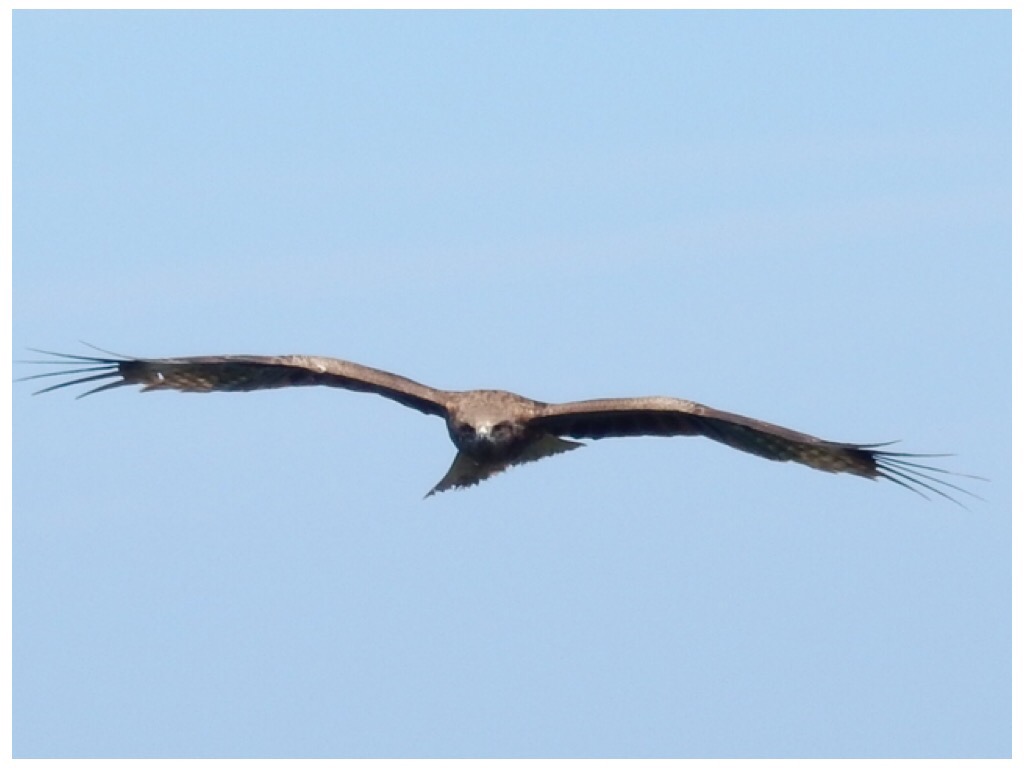 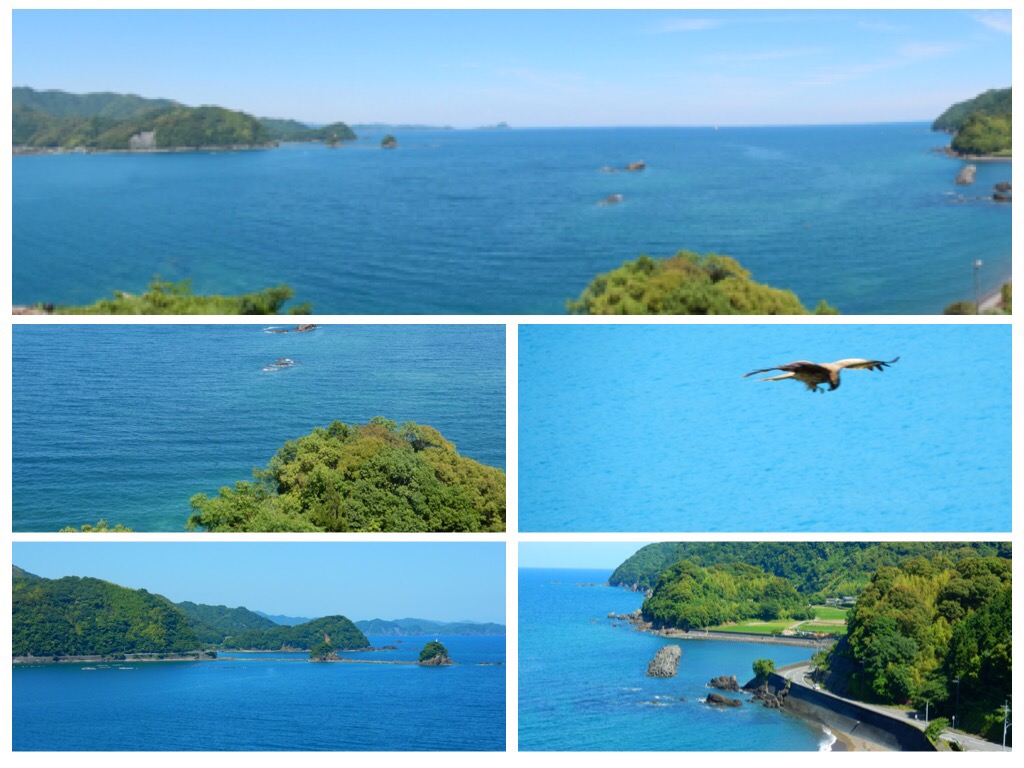 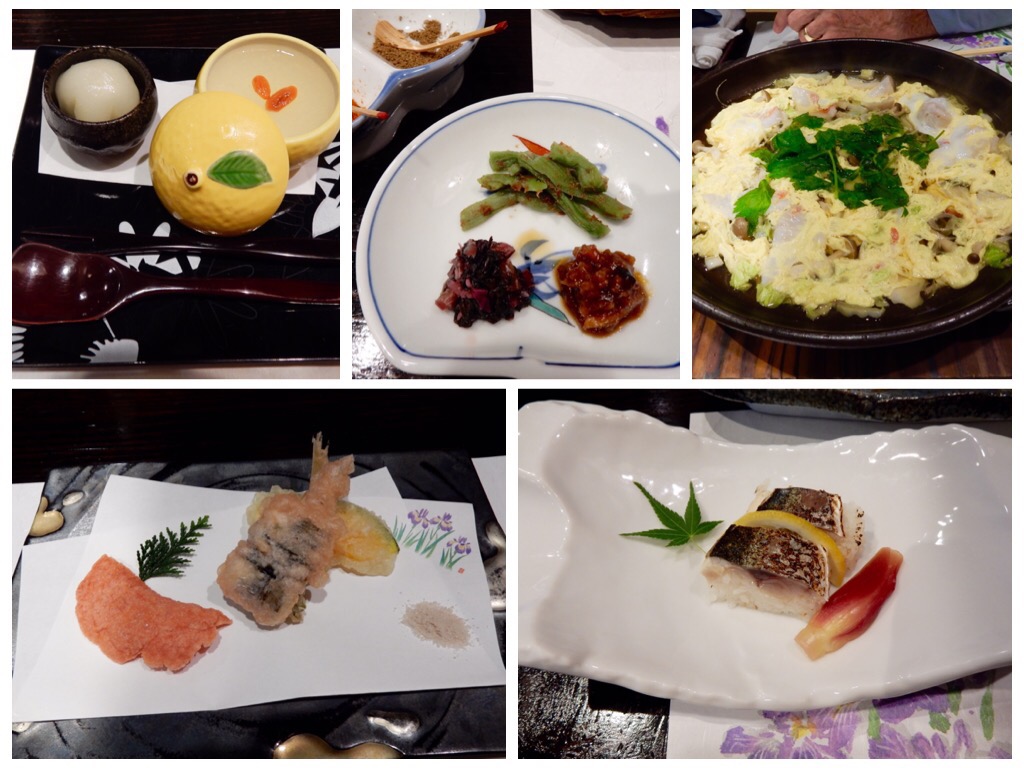 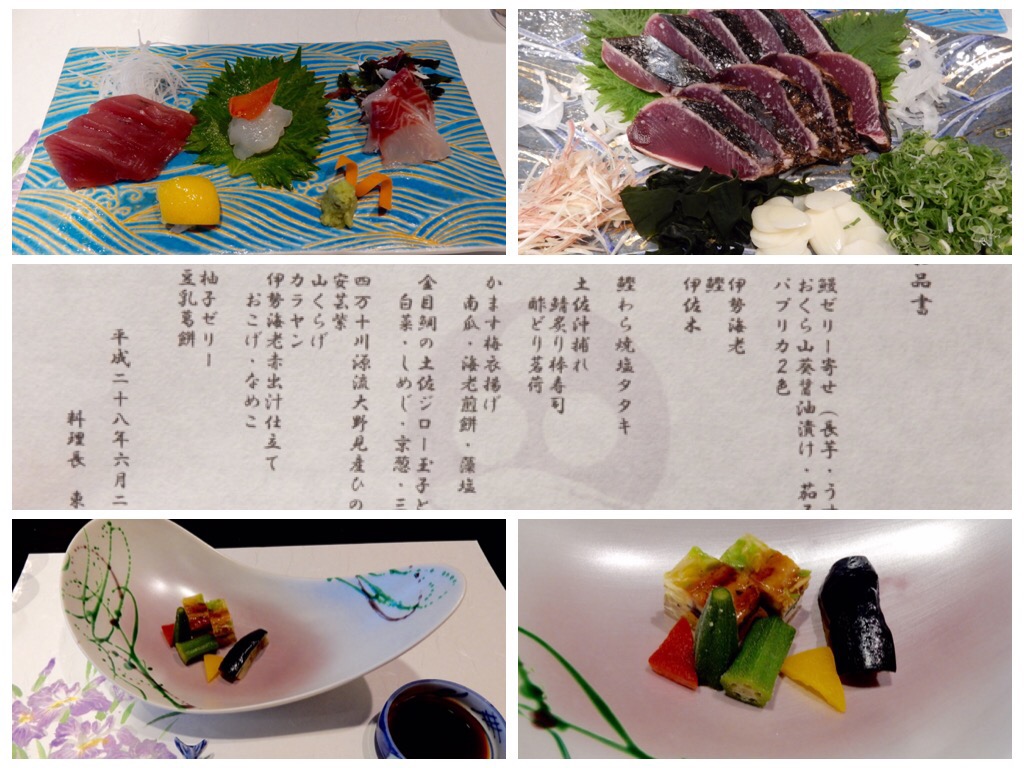 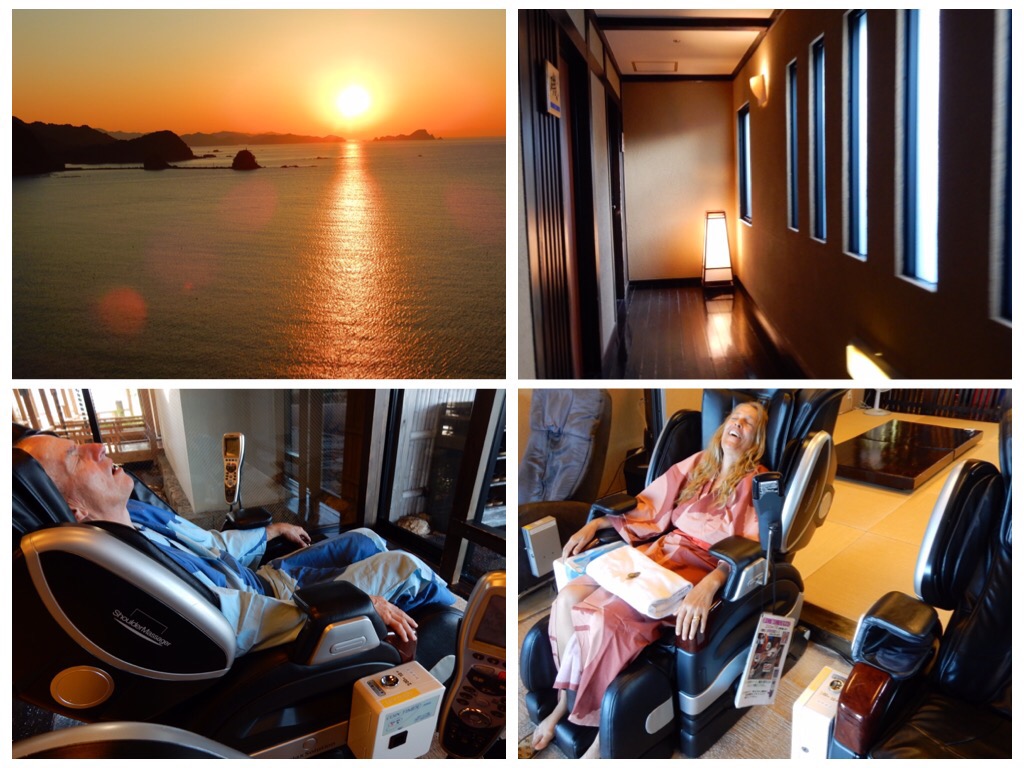 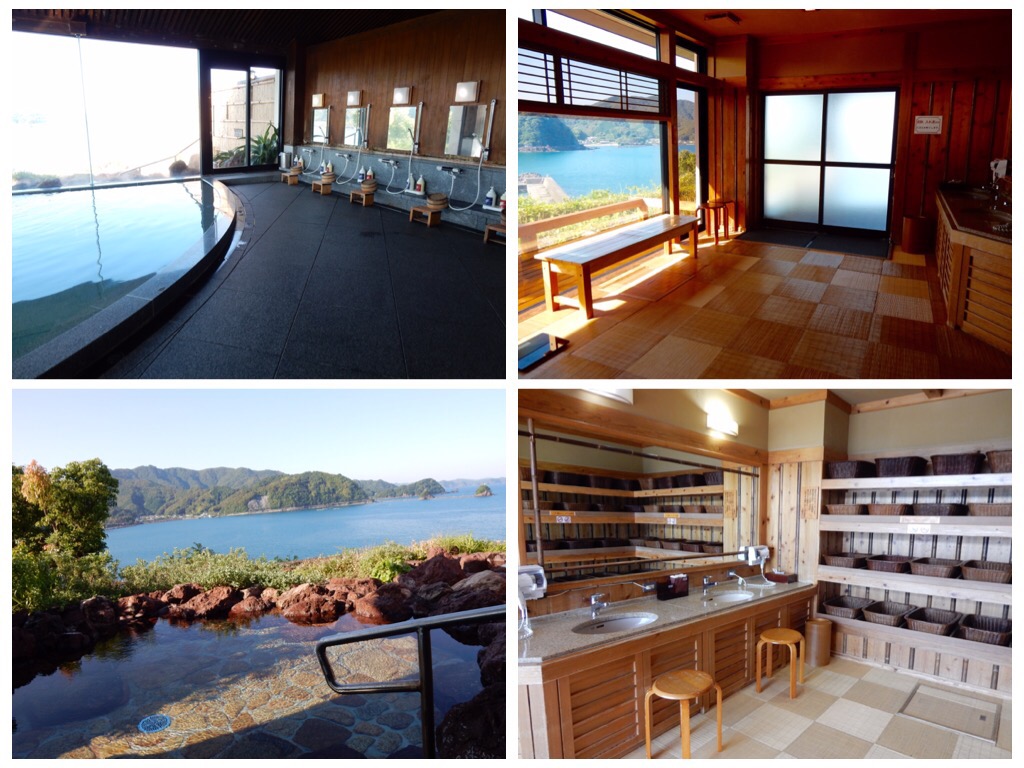 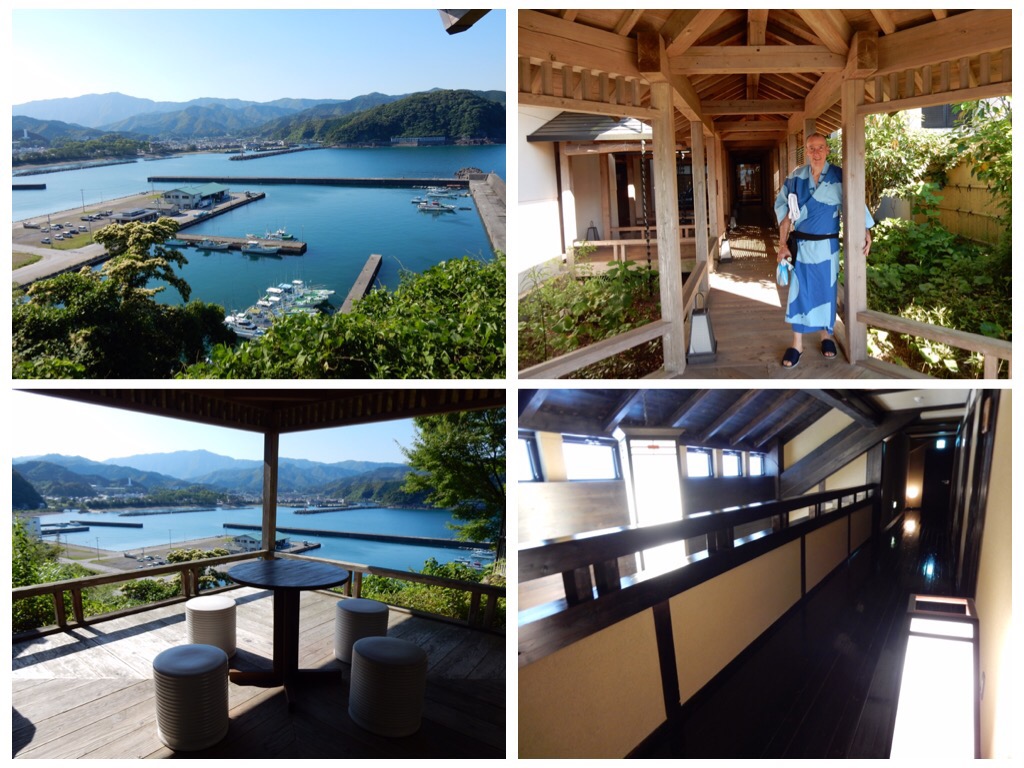 Shikoku 88 Temples Foot Pilgrimage; Walking along the the Pacific Coastline from Susaki City to Nakatosa

The friendly couple who own the Ippuku Ryokan in Susaki City, made us a simple but lovely breakfast of some grilled vegetables, miso soup, very good rice, some pickles, a small piece of grilled fish, a slice of a Japanese egg omelet and a slice of fruit.

They really do a great job at keeping their Ryokan clean, neat and comfortable.
When we left, they wished us a safe journey and gifted us some chopsticks that the husband had carved from pieces of wood, wrapped in a white crane envelope that the wife made.

We left Susaki city and walked on an almost traffic-free road along the Susaki Bay, which hugs the Pacific coastline.
The color of the water on this sunny day was azure blue and green.
The road was beautiful, narrow and with very dramatic ocean views.

Along the way we bought Biwa (large Loquats) from a road stand and some clementines from a small shop.
The lady at the shop gave us an Osettai gift of a sweet grapefruit.
We ate them sitting by the ocean in a shaded spot.

Despite making our walk longer by nearly eight kilometers, we were happy that we had taken the coastal road, and we spoke about doing so in future routes, where we could choose to either take the direct route or to explore the longer, more scenic roads.
Obviously we are starting to enjoy the long days of walking more and more.

Without a doubt, our pilgrimage will be much longer than most people’s.
As an example, we take the longer scenic roads and we make less ambitious kilometer days, so we can enjoy the places that we pass through, instead of just walking through them to the next temple.

The weather was perfect and as we neared Nakatosa, we realized that we had plenty of time for lunch.
The town looked very small.
It had two large structures that were built to provide the locals with a safe place to hide, should a tsunami strike the area.

Jules adds: “As I later read in a visitors’ brochure, this modest town has a harbor area which is a national cultural treasure, because of the picturesque design of the traditional houses that are crowded around the fishing boats tied up in the natural harbor. We have enjoyed very much some of the smaller villages along the coastline in this area – some are quite lively, with interesting, small restaurants and shops.”

We made some turns without even knowing where to go, and we came upon a small and lively market.
People were buying local specialties that included Bonito Tuna in every imaginable forms. There was raw tuna, smoked, dried, shaved into Bonito flakes and salted.

There were also local jams, local honey, fresh local fruit and sweets.
We bought some fresh watermelon and sweet potato sticks that were dried with salt and honey.

At a small local restaurant, we asked the proprietor if she could make us a Yaki Udon, with vegetables only.
She made us two huge, lovely dishes of sautéed onions, cabbage, carrots and scallions with home made udon noodles, a pleasantly spiced and savory sauce and some bonito.
She served the dishes on sizzling cast iron plates.
It was very delicious.

A couple sitting next to us chatted with us about our pilgrimage and about their recent trip to Europe.
After they finished eating, they ordered vanilla and ginger ice cream cones.

It was a hot day, and I found myself eyeing their ice cream, despite the fact that we had decided to cut back on eating ice cream to only once a week.

When the ice cream arrived, the woman insisted on giving me her ice cream as an Osettai.
I tried to refuse, saying that we had planned to order one as well, but she would have none of it, and insisted that I accept her ice cream.

Later, Jules told me that my “resistance” was not very strong, and that it was obvious to anyone that I really wanted to have an ice cream….
I do love ice cream, it is just that I sometimes get a sugar headache if I eat very sugary things.
So I accepted her ice cream, thanked her very much, and shared it with Jules.
They were such a nice and gentle couple.

They asked us where we were headed today, and their eyes opened wide, when we mentioned that we were going to stay the night at the Honjin Onsen, on top of the nearby cliffs.
Everybody in the area knows that it is a high end resort, and most pilgrims do not stay in such luxurious places.

Jules joked that she must have regretted giving me her ice cream, after hearing that we are staying at a luxury resort.

The truth is, that luxury resorts are not so suitable for pilgrims.
They have no vending machines for tea and no laundry machines.
After hours of walking, at the end of each day I always use the washing machines.

But we’ve brought on this pilgrimage only light hiking clothes that were meant to be washed by hand and normally will dry overnight, even if we do not have access to a washing machine, so laundry is not a big problem for us.

The hotel is situated on the cliff with an indoor Onsen and an outdoor Rotenburo that overlook the vast Pacific.
The indoor hot springs has soft water that leaves the skin feeling silky, while the outdoor bath is surrounded with rocks, and has hot slaty ocean water.

I washed my body carefully, examined my healed blisters, shaved, trimmed my nails and wedged myself between the rocks like a satisfied crab.
I sat for a long time, enjoying the cool ocean breeze and the steaming hot pools.

When we finished soaking, we melted into the large massage chairs in front of the water and allowed the advanced Japanese technology to massage our backs, necks, legs and arms.
Some of these sophisticated massage chairs cost almost as much as a small car.

Our 10 tatami mat Japanese style room has vast views over the ocean, and we also have an additional 10 tatami mat-size sitting room, with a large wooden table with low chairs, to spread out our maps and discuss the next few days’ route options.

In our bathroom, we have a deep Ofuru made of granite stone, in front of a window that opens to the bay.
I could not resist spoiling myself with all the Royal jelly with olive oil products, massaging my face and neck with a special peeling gel, and remembering my old self who loves and adores luxuries.

Dinner was an artistic feast.
The special menu was printed on rice paper.
We had the local speciality, seared Tuna Tataki served with thin slices of onion, garlic, Shiso leaves, chopped scallions and a lemon Yuzu sauce.

There was mouth watering sushi, two cubes of vegetable terrine with cooked cut vegetables, a plate of local Sashimi which included raw crab, a plate of tempura Kabocha and a small local fish wrapped around Ume leaf.

The featured dish was a delicious lobster hotpot cooked with mushrooms, herbs and eggs, served with steamed local rice, miso soup, pickles, and for dessert, Yuzu lemon jelly and one Mochi filled with vanilla cream.
Everything was presented artfully on beautiful ceramic plates.

While we were eating dinner, the maid laid out our futon beds on the tatami floor in our room.
The sheets are white, clean and well ironed.
I can hear the waves of the ocean through the windows, and I know that I will sleep well tonight.

In this pilgrimage, we pass mostly through areas where there are modest accommodations.
At times, there are only rough and very basic accommodations, and it is all fine with me.
I do not feel bad when we have to rough it, but I also do not want to shy away from comforts and luxuries when they are available.
When it is possible, I want to enjoy beautiful places, local produce, charming markets, small art museums and superbly designed hotels.

The Buddha’s advice is that one should abstain from using high and luxurious beds and seats.

For generations, Buddhists were divided over what constitutes “high seats and beds.”

Some modern day Buddhists say that it is not about a specific form of seat or bed, but about an attachment to luxuries.

Others say that it is not at all to be taken literally, but that it is actually about royalty and power – “the seat of power,” for example, or about seeking power above others.

Some say it is about not allowing your ego to be in control of your life, always seeking comforts for the body, which will keep you attached to the belief that the body is real and unaware of its nothingness.

In other works, the body follows the dictates of the mind and has no reality of its own.
It will be as healthy, vibrant, youthful and beautiful, as you will allow it.
It is your thoughts, beliefs and actions that wear down this body of light and energy that you were given.
By itself, it has no reason to age, or wear down or to become sick, but your beliefs, anger and the ideas that you hold, can make it all occur.

Am I too attached to luxuries?
Maybe…
But we were happy and laughing while staying at the dirty place where we “celebrated” jules’ birthday.
We did not suffer nor feel sorry for ourselves.
It was all part of the fun.

Even tonight, we are still sleeping on the floor on a thin futon mattress, it is only that we are surrounded by luxuries and good food, good views and good aesthetics.

Do I love luxury?
Absolutely Yes!
But am I too attached to luxury and do I feel uncomfortable in humble, simple places?
Not really….

I believe that all humans deserve to live in clean and beautiful surroundings, and that this should not be considered a luxury.

Think of the old days when running water, electricity, hot water, heating or air conditioning were considered real luxuries.
Nowadays in Japan, they are everywhere, even in the smallest apartments.

As holy children of Life, we deserve to live a clean, abundant, healthy, wholesome and elevated life.

Luxury is very illusory.
It is a fleeting feeling.
It is based on what contemporary people value at the time.
Is Carrera Marble from Italy really more beautiful than local wood as a material?
Not really…

What seems luxurious is nothing more than the same earthly dust, arranged in a more appealing way.

There is a story told about the Buddha in which he was watching a group of very sensual dancers, dressed in beautiful red and gold fineries and adorned with glittering jewelry.
They looked so sexy and desirable during that night’s festivities.

The next morning as he woke up very early to meditate, he saw those same female dancers sleeping.
They had smeared black eyeliner, and comical red lipstick on the sides of their mouths.
Some were snoring and others were drooling in their deep sleep.

He wondered to himself:
“How could I have found them so desirous the night before?
How fleeing and flaky are all human illusions….”

Anyway, it is time to go to bed, for tomorrow we have a long day of walking to temple 38, Iwamotoji.

In Japan, wandering monks are called Unsui, which means “Cloud and Water,” as a reminder that we should always be floating and flowing…..

Temples visited:
None
Overnight at Kuroshino Honjin Onsen in Nakatosa