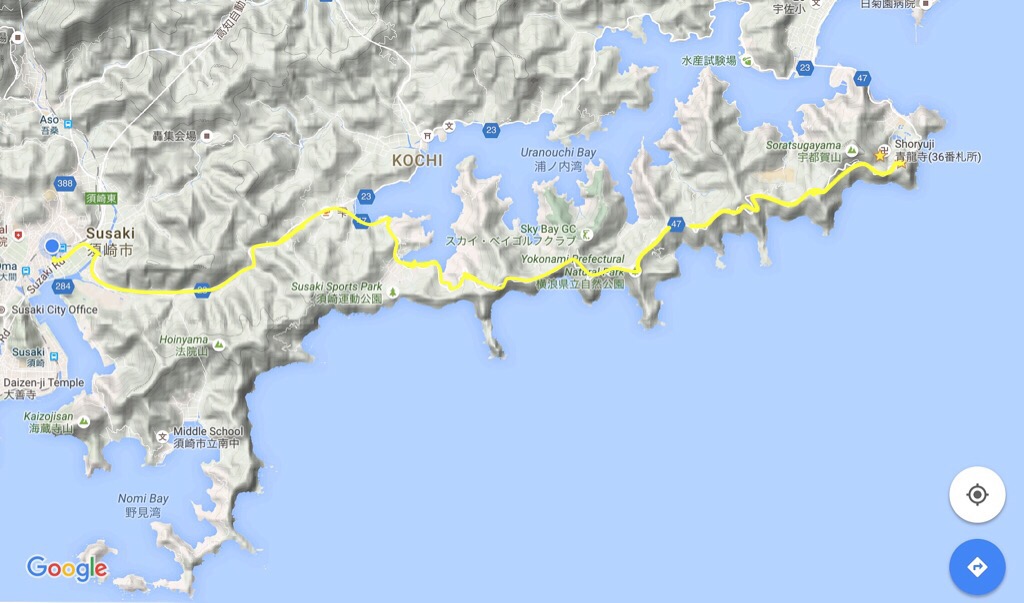 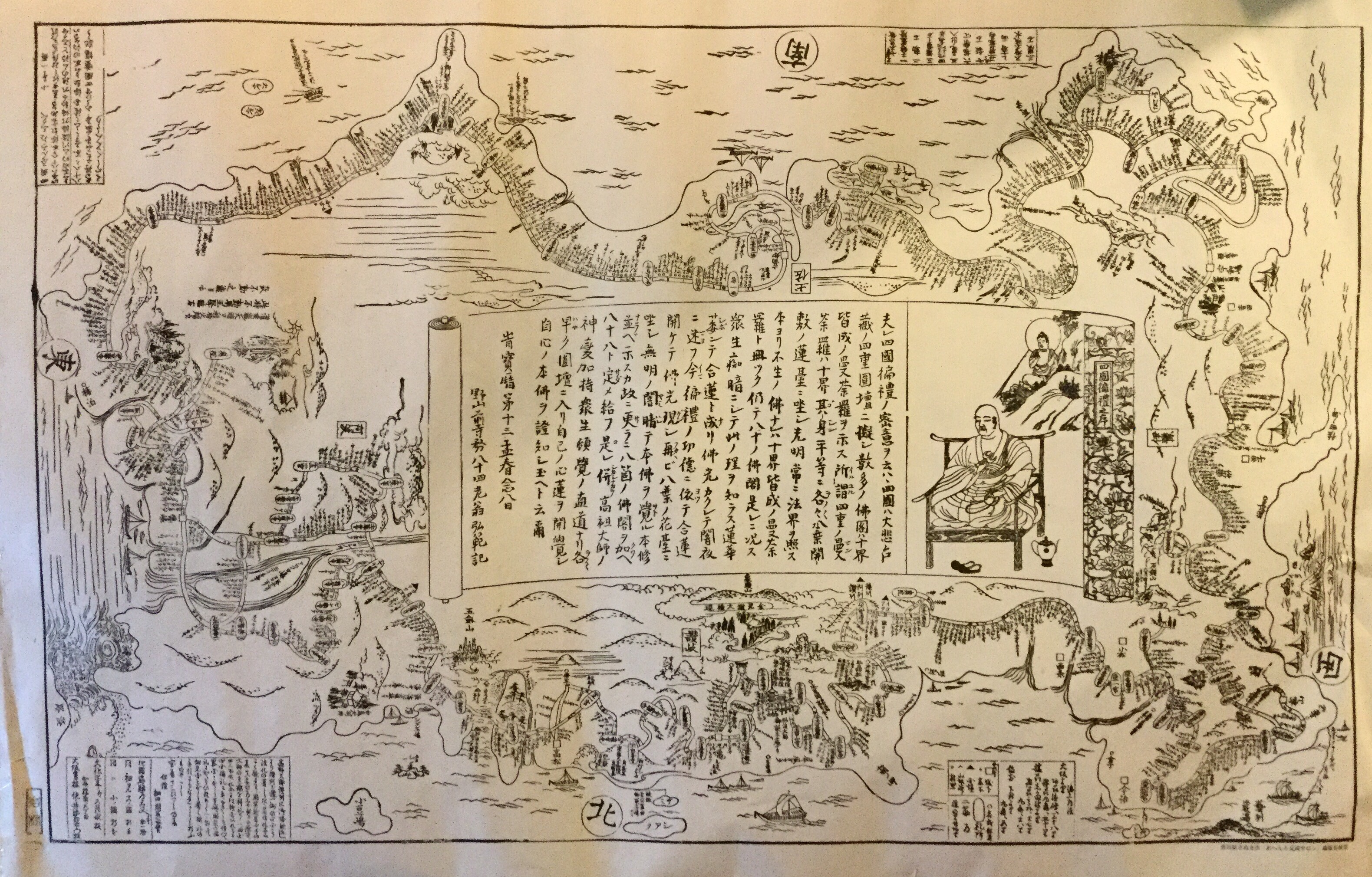 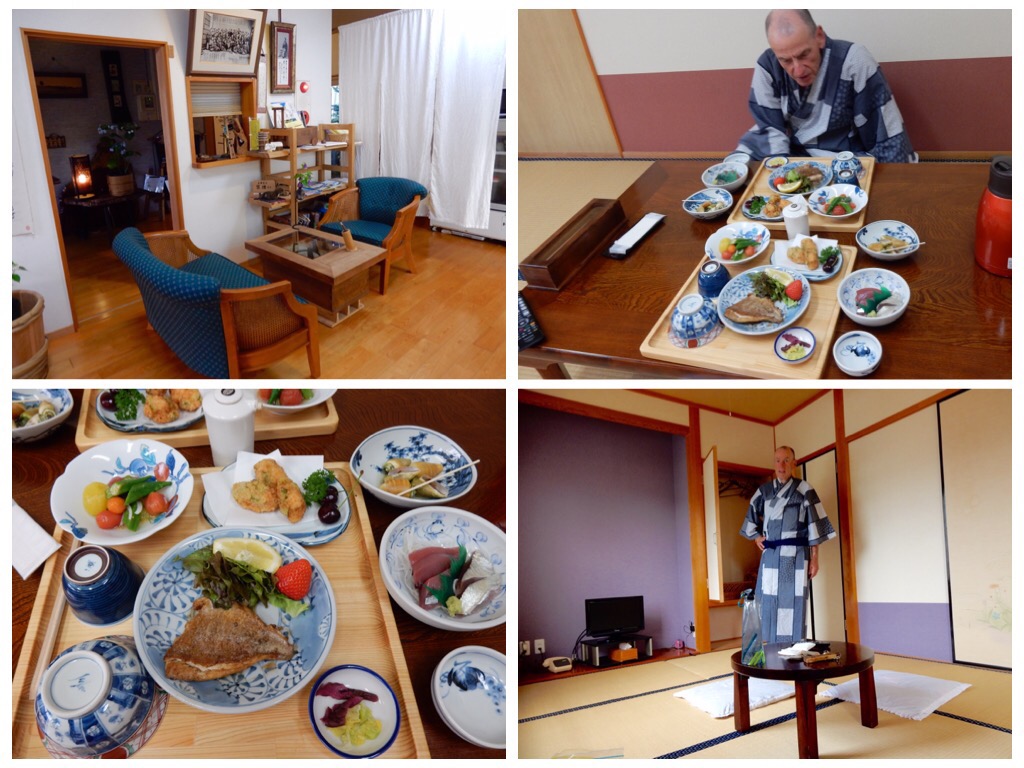 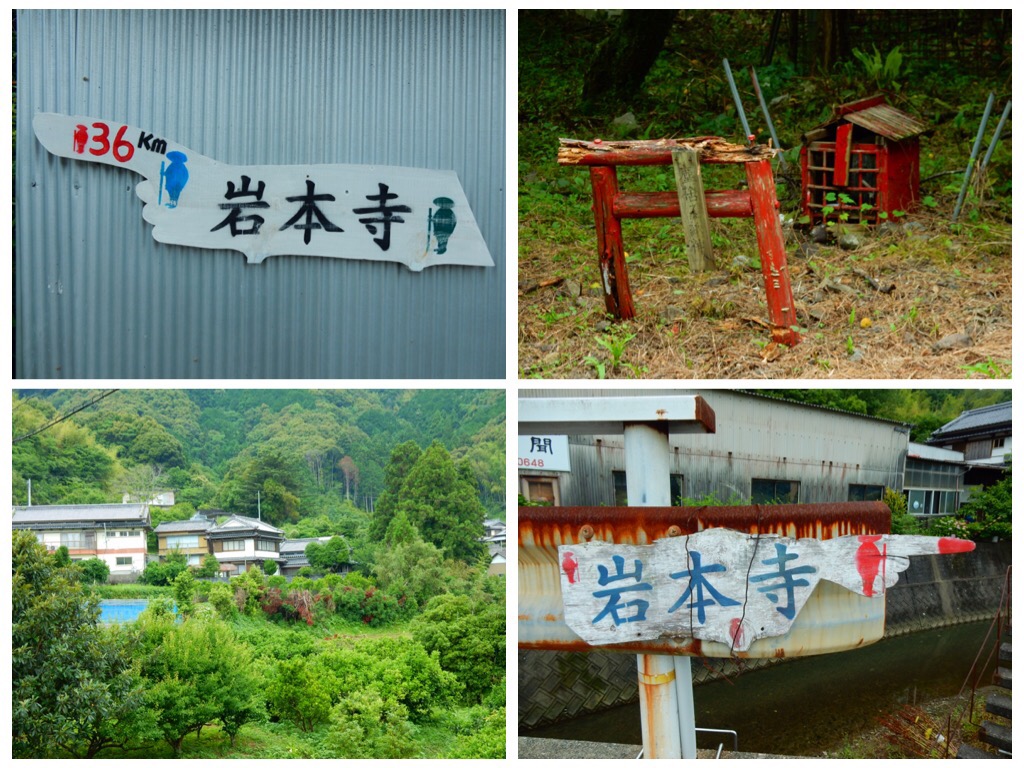 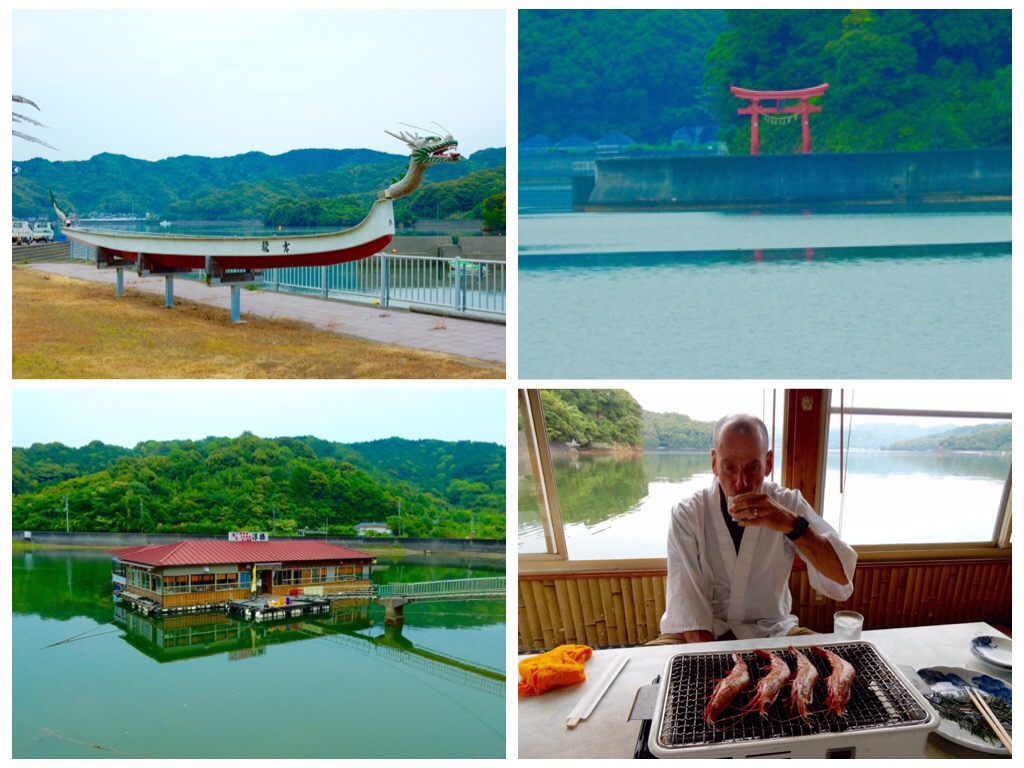 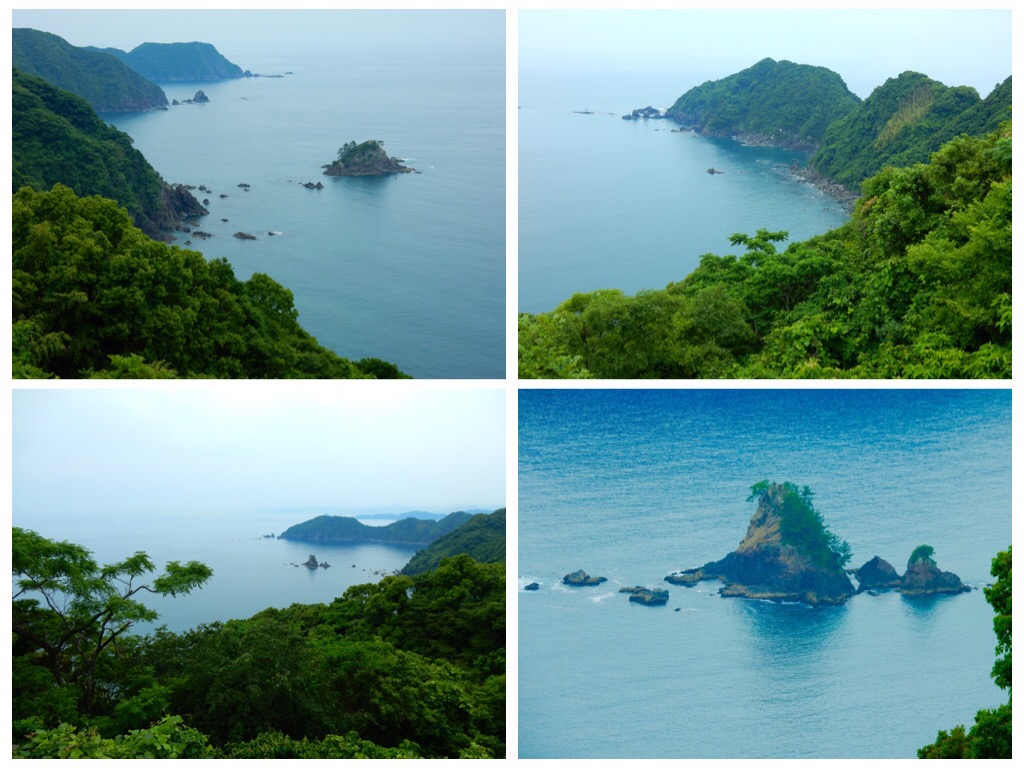 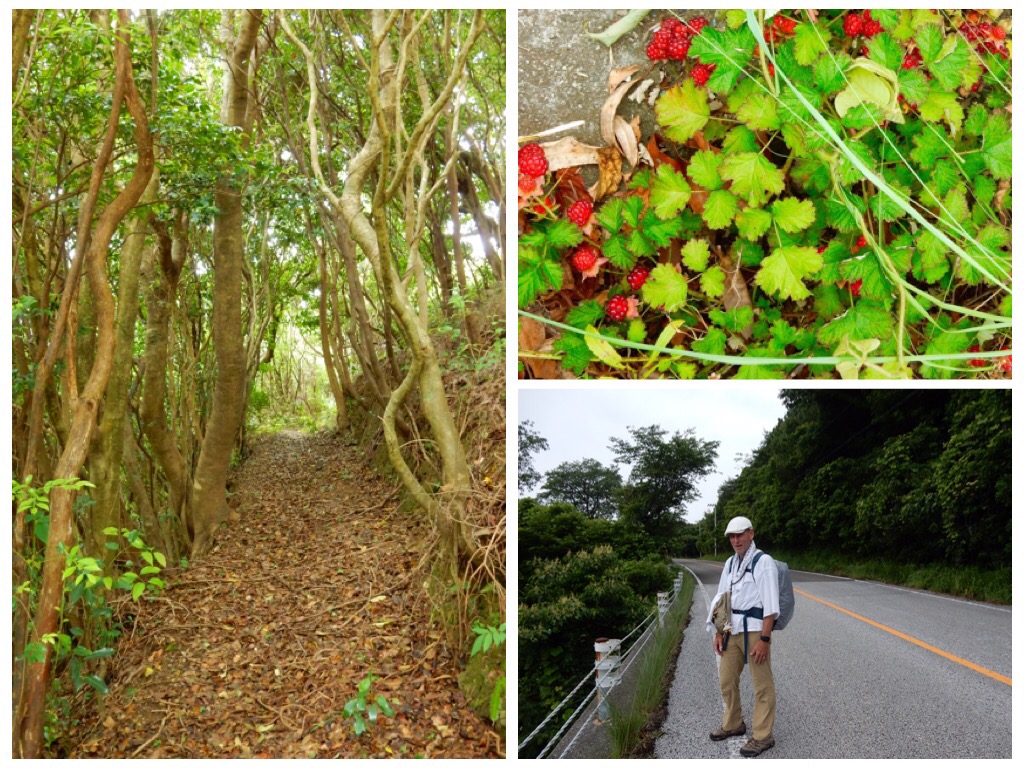 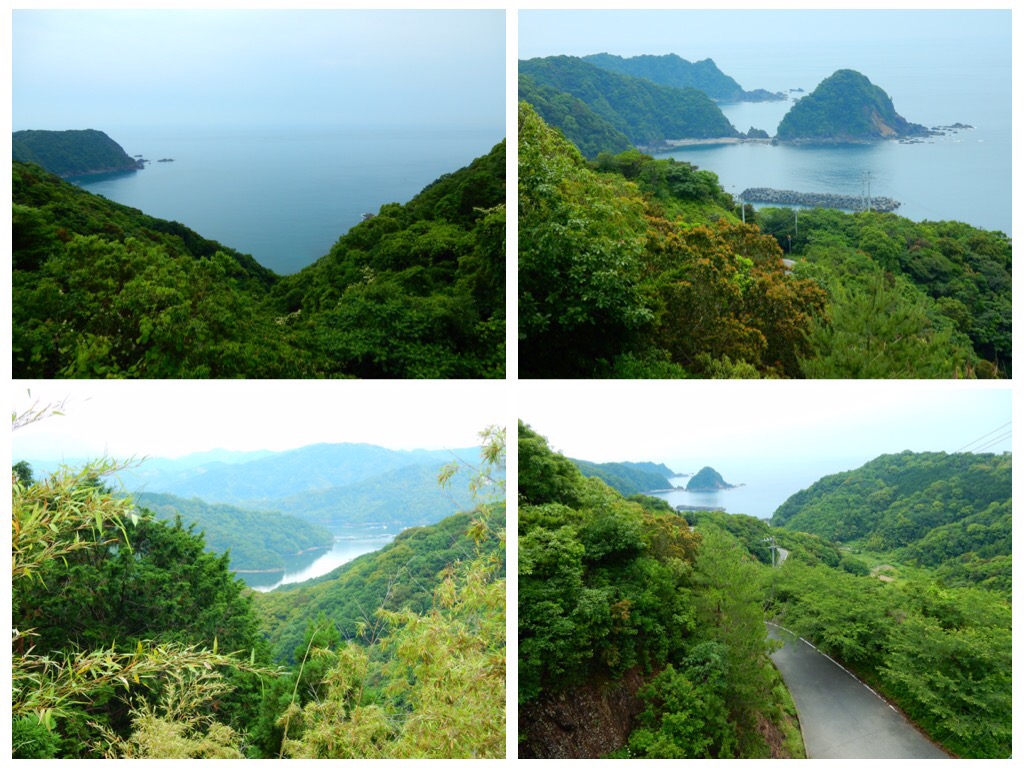 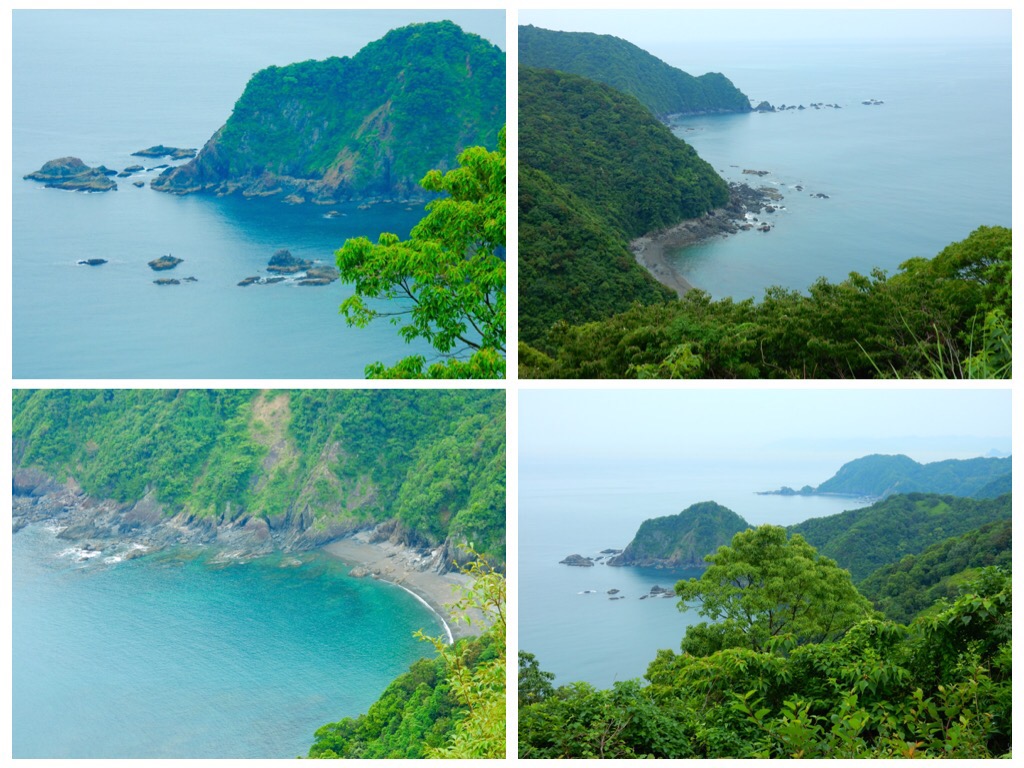 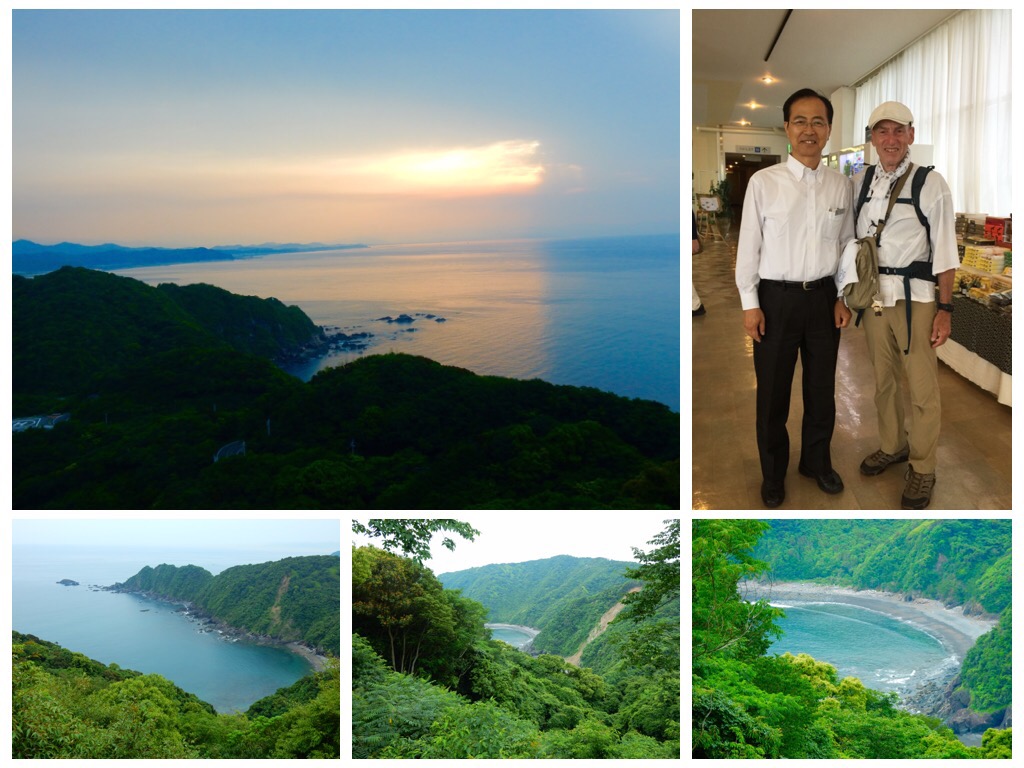 The hotel owner chatted with us over breakfast.
He told us that he has traveled around the world, and spent many years studying the different forms of Buddhism as it is practiced all over Asia.

He told us that he has lived in this area all his life, and that his mother and grandmother always took care of passing pilgrims.

This hotel, in which we spent a great night with vast views over the ocean, used to be government run.
It closed down, and he decided to buy it and continue to provide services and accommodation for pilgrims.

He added the Mediterranean inspired addition to the hotel, which he named “Vila Santorini,” to provide an upscale accommodation with lovely suites.

Our map books said that the high road that runs along the skyline mountains overlooking the ocean, provides breathtaking views, but that it is a long stretch of road that is very hilly and offers no food or drink along the way.

We decided that we much prefer to walk this longer route on the dragon’s spine, than to walk on the busy road.

We loaded all three of our collapsible bottles with water and tea.
I had forgotten our fourth bottle somewhere on the road when I stopped to tie my shoelaces on the first week of the pilgrimage.
By the time I remembered where I left it, we were too far away to go back and retrieve it.

The green dragon spine road was indeed very hilly.
There were hardly any stretches of flat road.
We were either climbing or descending all day long.

I am getting more used to carrying a heavy pack all day, and the uphills and downhills feel almost the same.
It is almost like when we approach a hill, my body kicks into lower gear and I make it to the top of the hill in no time.
Who knew I was so strong?…..
Surely not I….

There were no places to eat or to buy snacks, but we brought with us some tea wafers that we had bought that morning in our hotel’s gift shop.
We ate them with iced tea, sitting on a bench to rest our feet.

The clouds made the walk very pleasant.
It would have been harder to climb all day if it were a very sunny or rainy day.

Because the route is so remote and so scenic, it is used by sports car drivers and cyclists.
Two shiny sports cars passed us at high speed.
I felt like a turtle with all my possessions on my back, walking slowly, slowly.

I imagined the drivers of the sports cars to be so clean and calm, cleaned shaved and with facial creams and nice smelling perfumes…
While we are pilgrims, walking blindly towards some obscure and invisible goal……

A bit later, we were passed by a team of professional cyclists.
They wore stretchy and perfectly fitted black performance bib shorts and attached sleeveless jerseys, and their muscles were glistening.

I thought to myself that professional athletes are very much like spiritual seekers.
Both have a special diet and regimented practices that require you to push way past their limits and explore new inner powers and vistas…

But with my big traditional Henro hat and jacket, I felt like someone from the Middle Ages, compared to those athletes with their beautiful bodies and shiny bikes.

At the end of the high road, we descended to a road running by a lake.
There was a floating restaurant on the lake which served table-side grilled fresh seafood.

Because we had made such good time, we decided to stop for lunch.
The restaurant was huge, with tatami mat floors and low tables., but we were the only dinners.
We chose a table by the window, overlooking a beautiful red Shinto shrine in the distance.

We ordered a dish of seared Tuna Tataki and prawns and veg, to grill on our grill.
The waitresses were very kind and helped us to grill the prawns and came over to tell us when to take them off the grill and what sauce to dip them in.
They did everything but peel the prawns for us!
As always, people go out of their way to help us.

When the bus finally arrived, she came out again and came over to the bus stop, flagged the bus driver and asked him if he were going to Ohashl-iDori, where we wanted to go.
Only when she was confident that we were safely on the bus, did she wave at us, bow, and go back into the pharmacy.

It was the same with the hotel clerk who helped me make some bookings for accommodation for the next few days.
Since all places gives us dinner and breakfast, he made sure to say that Jules and I do not eat meat, chicken or pork, but that fish is OK, to every single guesthouse that he booked for us.

With a grave, serious face, he asked me if we would be willing to eat fish that would be lightly sautéed in butter.
I said: “Of Course!”
And his face lit up with such joy, as if he had won the lottery.
He got back to the man on the phone and they both were so relieved and happy that we had agreed to eat the fish in a little butter.

Tonight by the way, we ate that fish sautéed in a little butter and it was superb.
I think it was Jules’ favorite dish in the multi course meal.

We walked today nearly 26 kilometers to our guesthouse in Susaki city.
Big factories lined our entrance to the city, and with their huge scale and rusty machinery, they looked almost evil.

But our guesthouse is a lovely small place, full of light, and nice bright colors.
It feels very homey.
We showered together in their Ofuru bathing area, put on the clean Yukatas (summer kimonos), did our laundry and had a delicious dinner.

Before I go to bed on a full stomach, I think to myself:

The moon, the wind, the rain and the strong sun,
Instead of seeing them as potential dangers to me,
I rather think of them as my friends.

I am NOT an individual body,
A foreign object who is walking through the air,
The sun, the rain and the wind.
I am ONE with all the atomic particles and elements that make up the sun and the moon…
One with the rain and with the force of the wind.

The moon,
The sun
The rain
and wind,
Love and look out for me.
Nature really CARES for me.

Those are powerful friends to have.
I can learn a lot from them.
They can whisper to me the secrets of eternity….

We are pilgrims,
Beloved Children of everlasting LIFE

We are walking into eternity
The conditions are favorable for us!

I wish to never again see myself as a small and vulnerable body.
I am NOT a body,
I am free
For I am still as God created me.

I wish to be absorbed into eternity
I wish to become so full of light,
I wish to have no separation between me and the infinite…

Everything is eternity
The stars, the air, the sun, the moon, the wind, the people, the mountains, the forests, the sea.
All are forms of eternity that plays in the shadow of forms.

I walk into realization of my oneness with eternity.
Satori O Hirakimas – To become enlightened

We are pilgrims,
Beloved Children of everlasting LIFE

We are walking into eternity
And the conditions are favorable for us!

Temples visited:
None
Overnight at Ippuku Ryokan in Susaki City