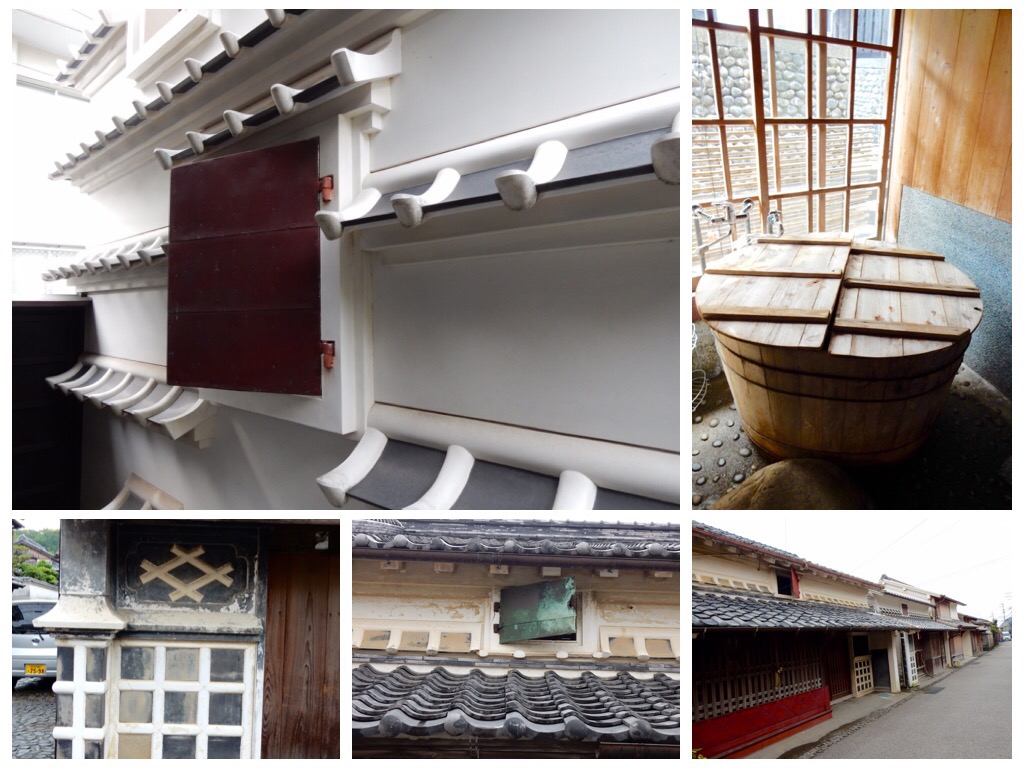 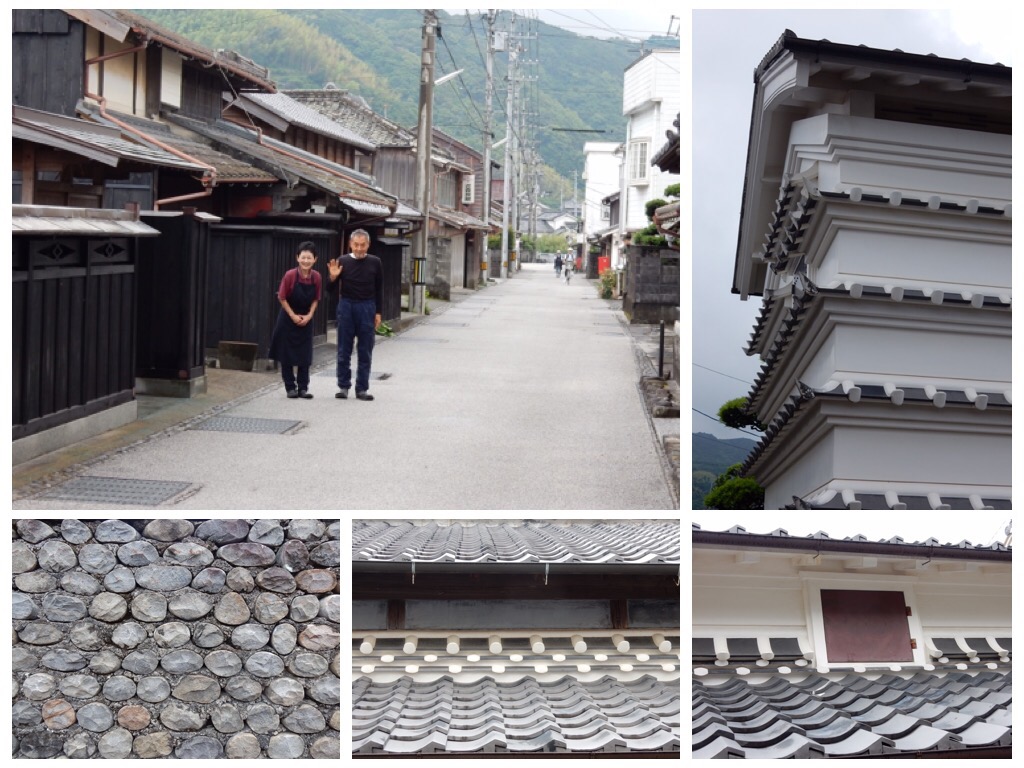 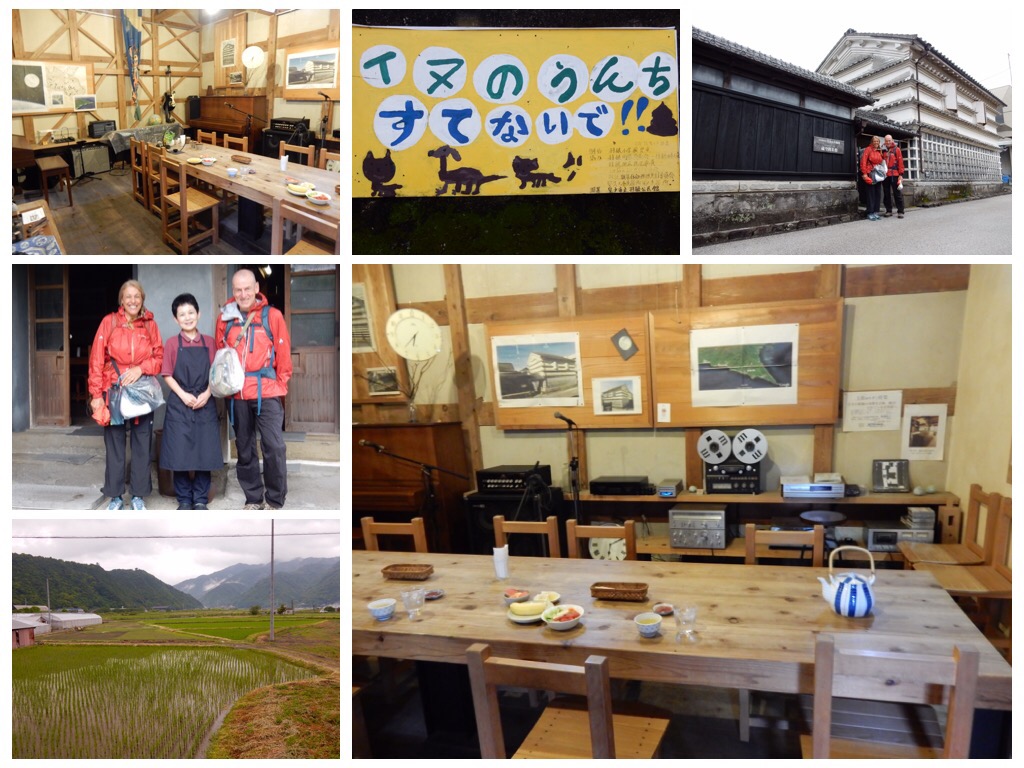 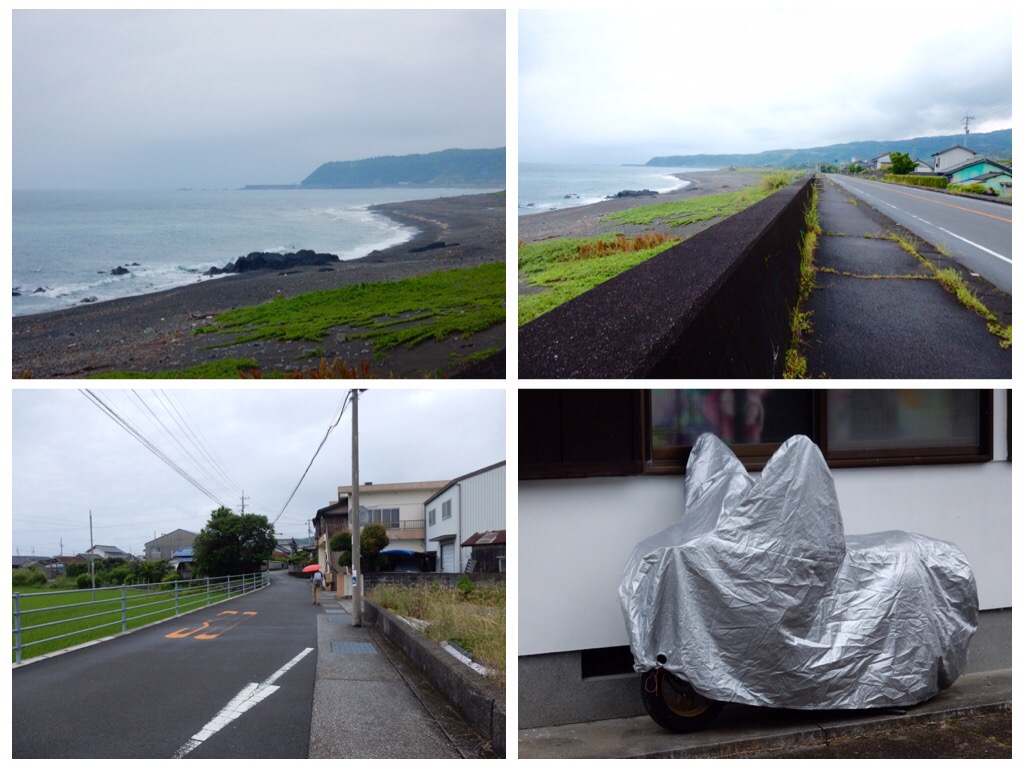 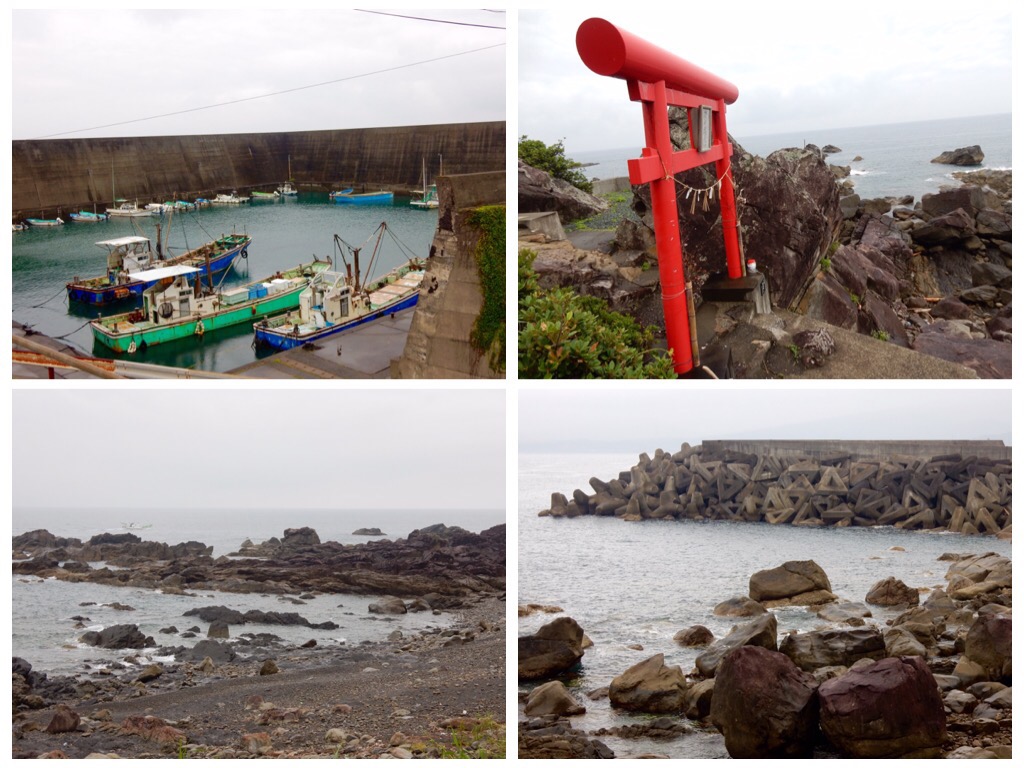 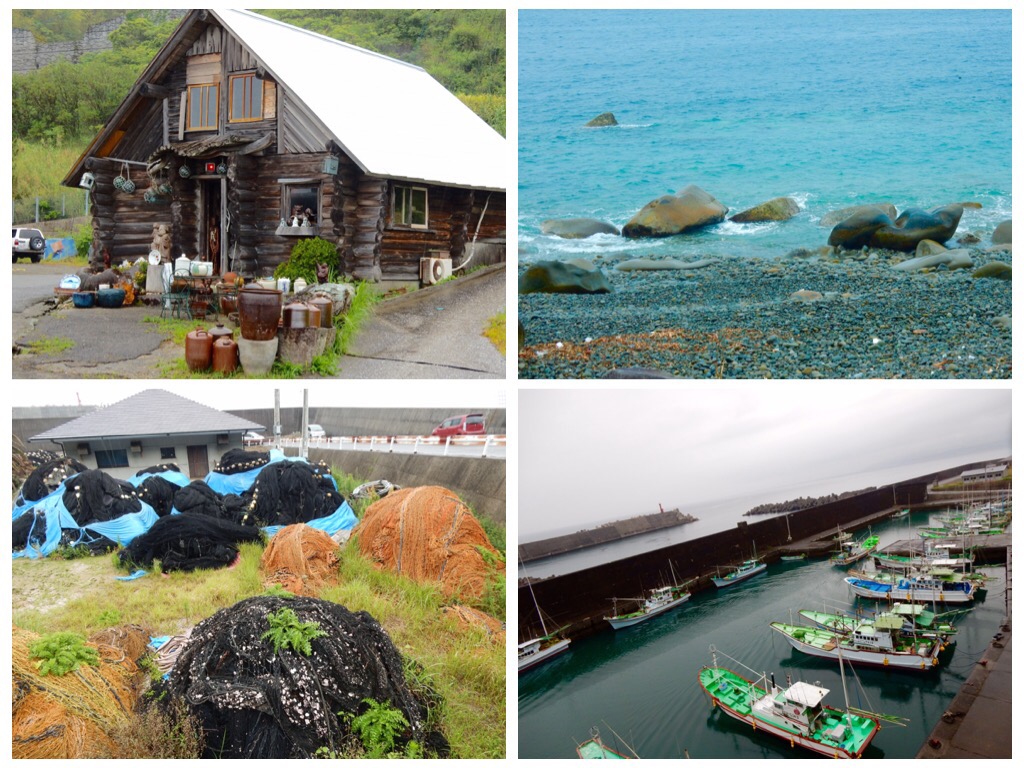 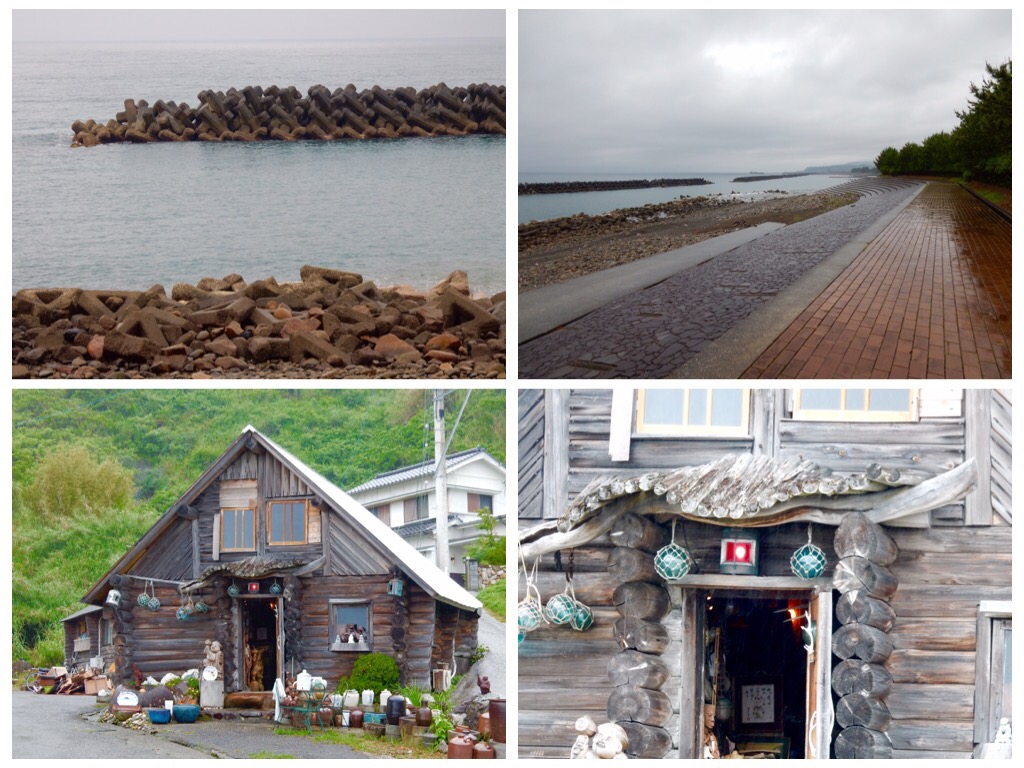 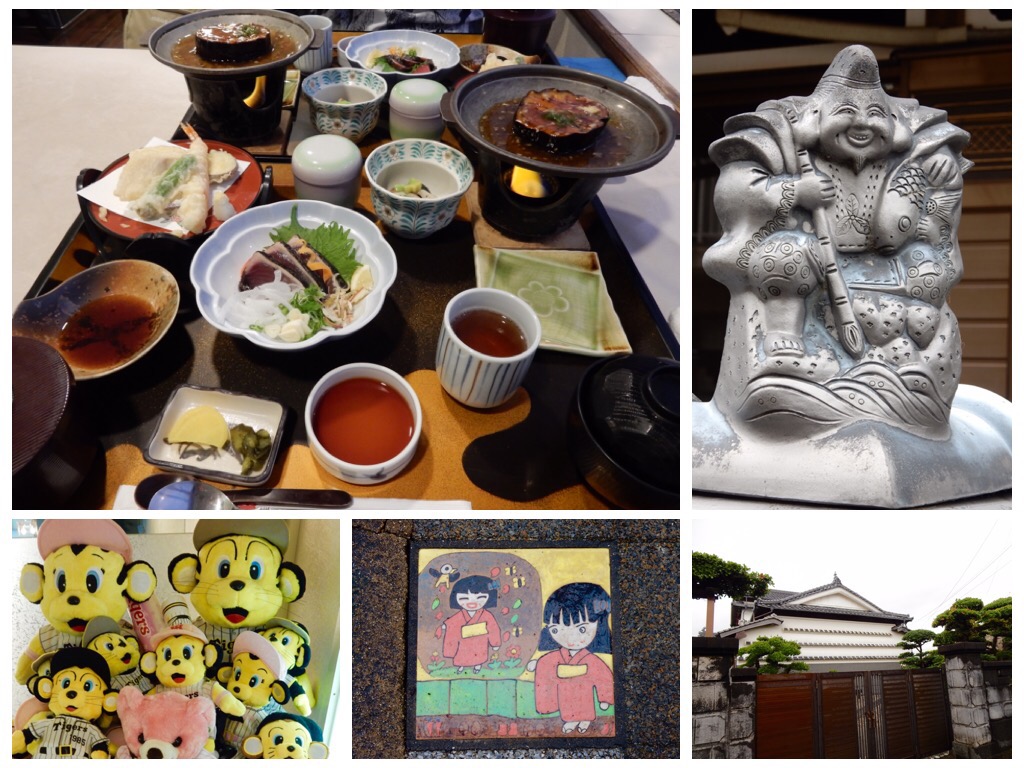 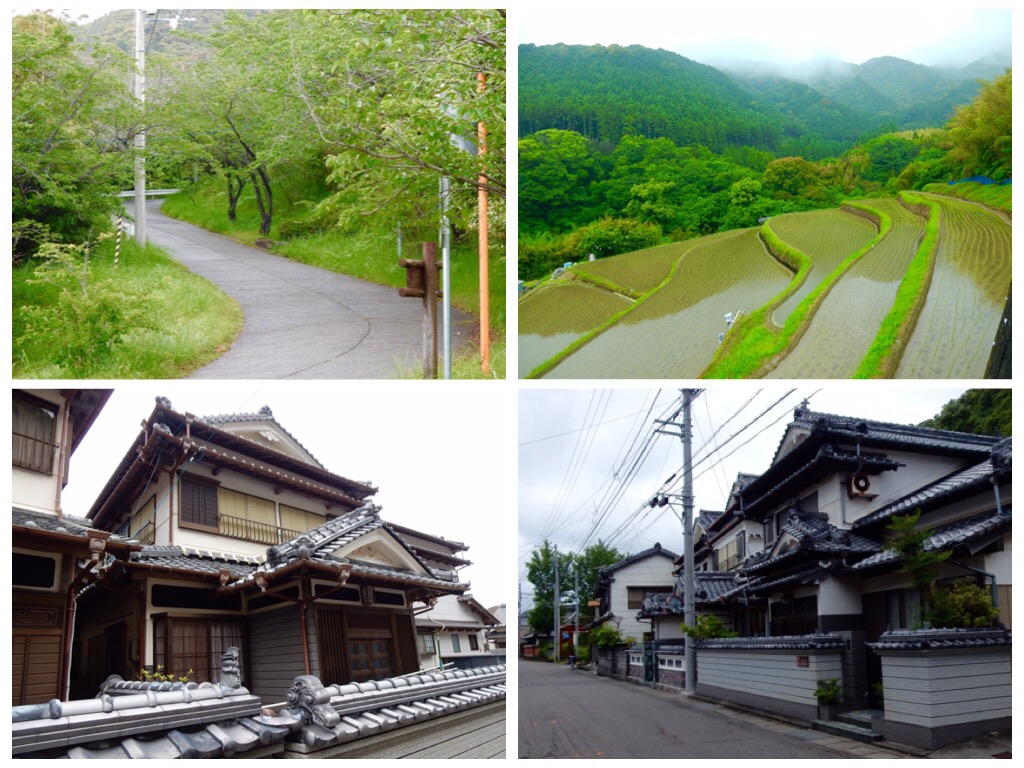 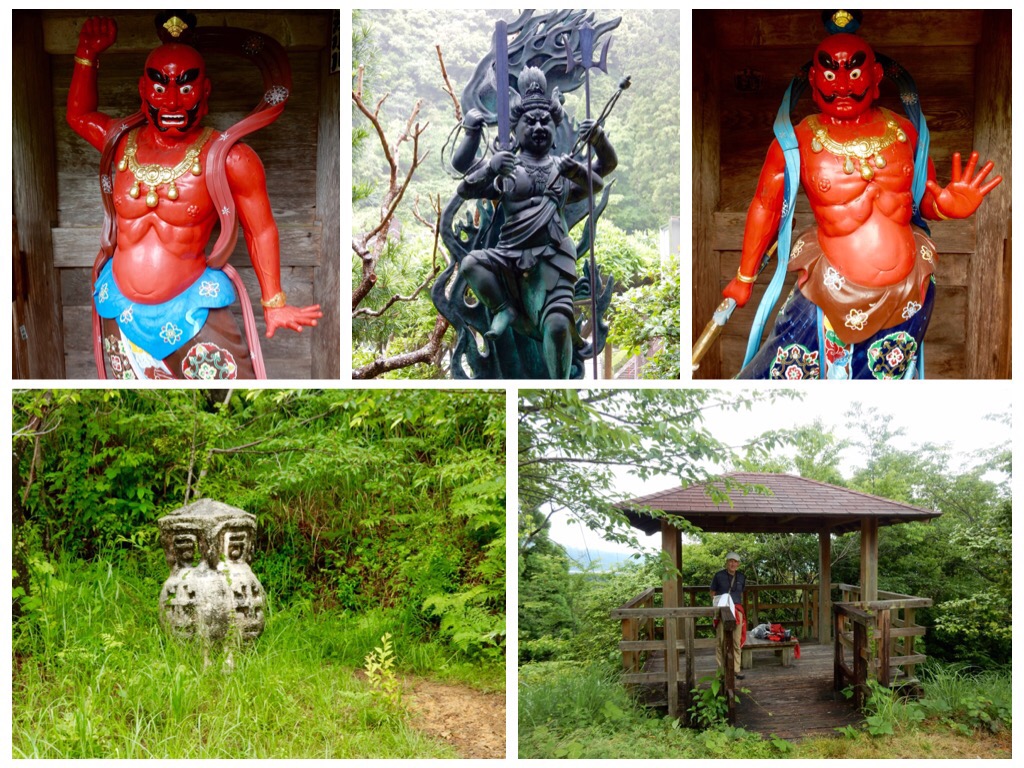 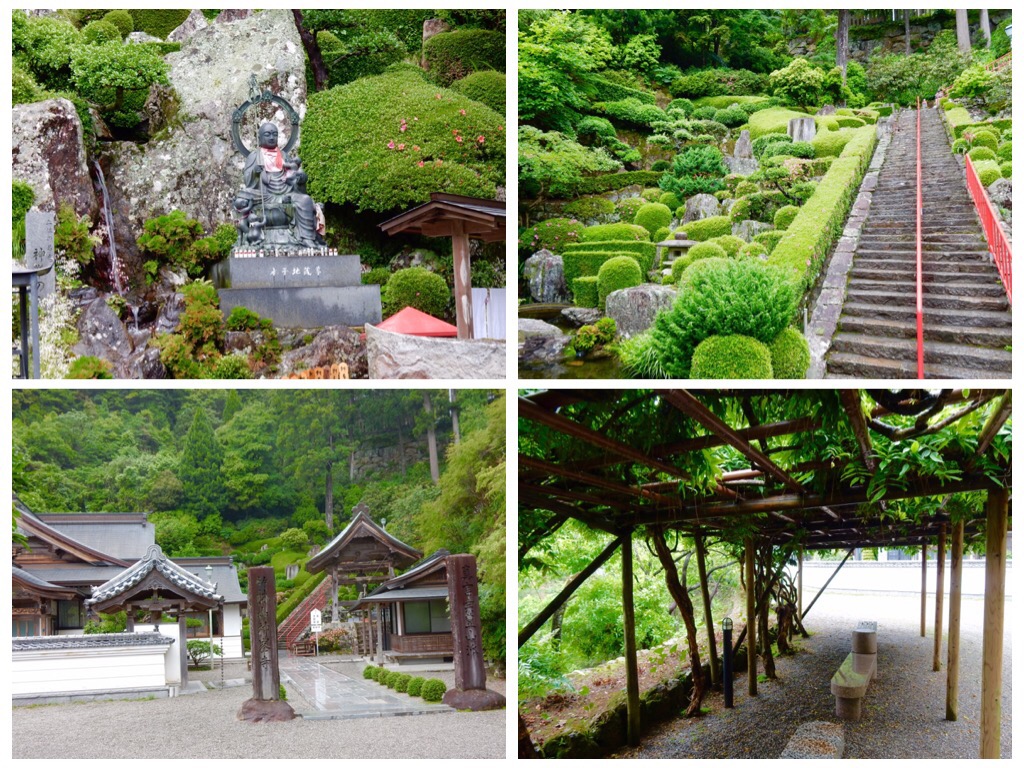 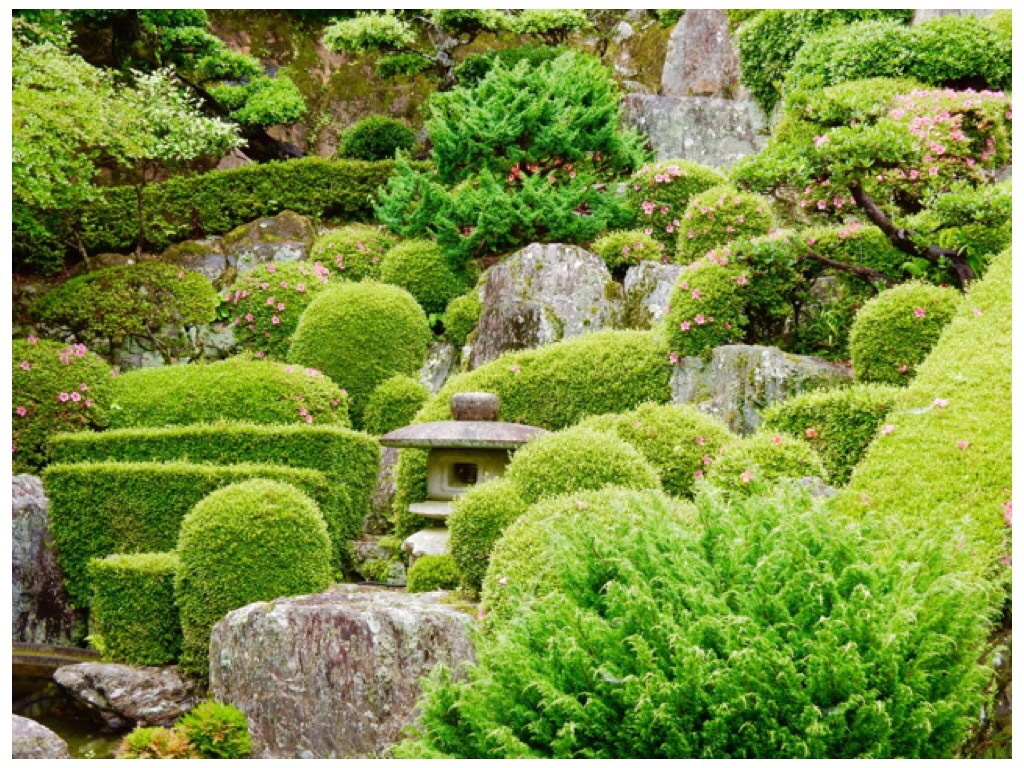 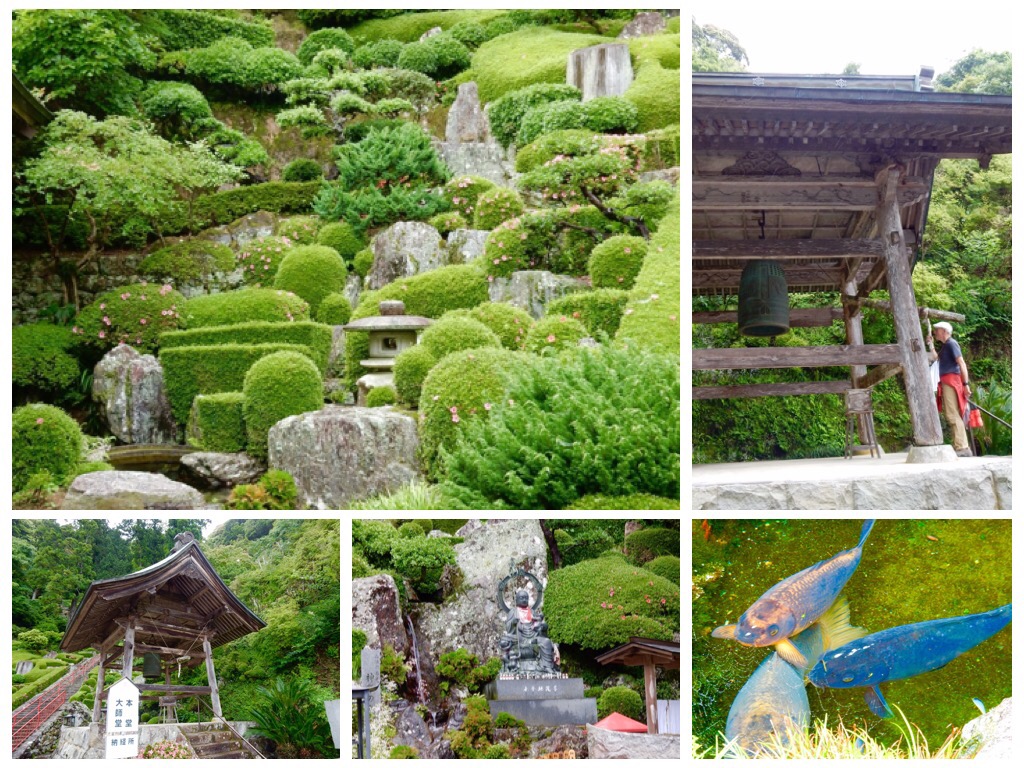 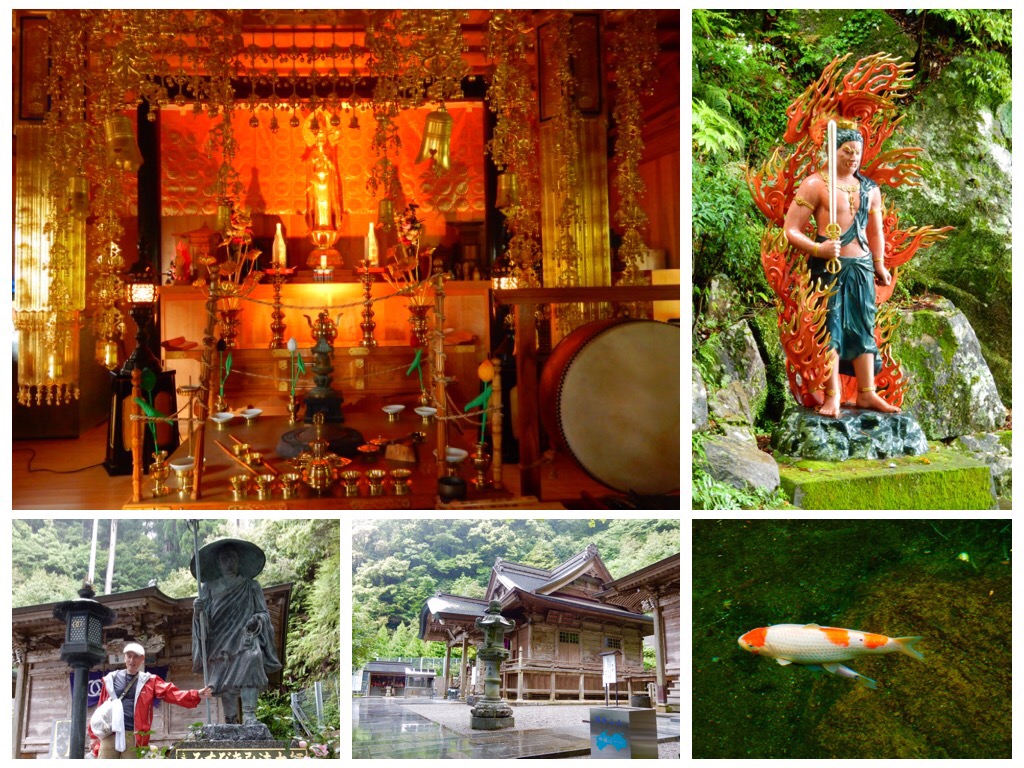 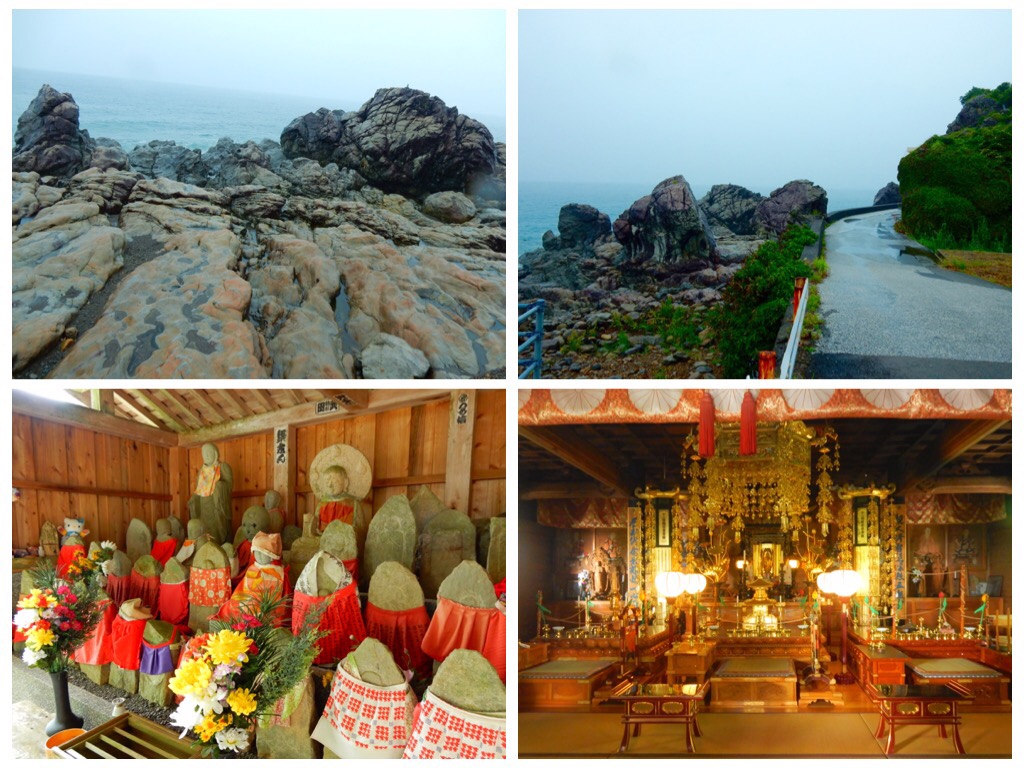 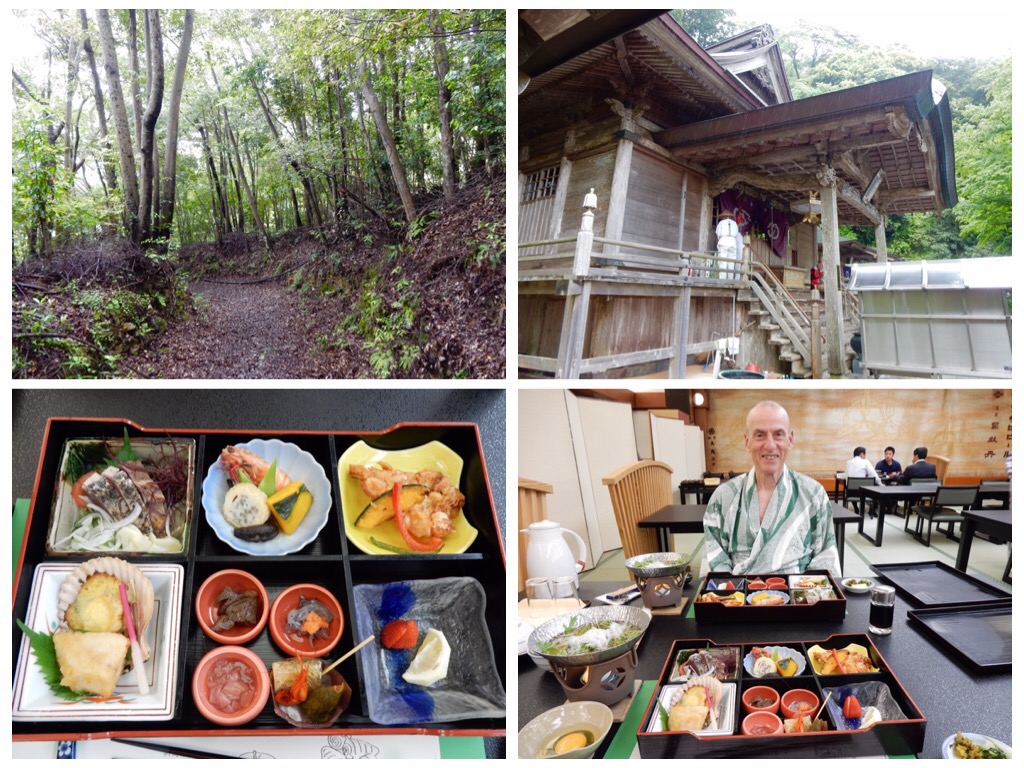 This morning we woke up to a rainy day.
There were scattered showers in the morning, which later turned into a rainfall that lasted most of the day.

At Sakan Guesthouse in Kirigawa, we had breakfast with the owners.
Even though we normally prefer a Japanese breakfast, they gave us a “Western breakfast” of toast with strawberry jam, a salad, a banana, a cut apple and some Wakame seaweed soup.

They were such a humble and gentle couple, even though it was obvious that they were multi talented and very interesting.
They had renovated their dining room, which was also where they had their musical instruments, in a very beautiful style.

The town of Kiragawa has some unique architectural details.
Because it is located at the ocean’s edge, it is often pummeled by storms and salt spray.
In order to prevent the water from damaging their houses, they have roof tiles descending in horizontal lines down the exterior walls of the houses.
It is a most interesting thing to see and quite beautiful as well.

There are also handmade chiseled rock walls, built hundreds of years ago, to hold back the waves and spray.

After suffering the effects of many Tsunamis, Japan is now taking many preventive measures to ensure the safety of its seaside villages.
There are fifty foot tall concrete walls around every marina, to protect the boats and the villages from the waves.
Everywhere are signs showing how high the water would rise to during a tsunami.
These signs are often high overhead, easily flooding all of the surrounding buildings.

In many places we saw signs detailing the Tsunami evacuation route, and even heavily constructed cement tunnels with submarine doors, to keep people safe if and when a tsunami strikes.

We dressed for the rain and packed all of our gear in rain protected plastic, expressed our gratitude and said Sayonara to our lovely hosts.

At 7:15 in the morning, the town was just waking up.
The day felt hot and we quickly put away our rain coats and just walked with our umbrellas.

Many of the costal villages we passed had similar building design styles, with layers of tile on the walls and handmade stone walls made from river rocks cut by hand.

We met again with Yumiko San, the pilgrim from Tokyo we had met a few days back.
We had lunch at a roadside restaurant, and Yumiko San called for us and helped us to change our hotel reservations for the night.

We visited no temples today, just a long walk along the coast and among the coastal villages.

At the village of Tano, we decided to stop walking for the day and to take a train to our accommodation in Aki.
Tomorrow we will start again in Tano, where we stopped tonight, and continue our walk towards the town of Aki.

Before we reached our hotel for the night, I finally broke down and bought some cheap Whisky.
I wanted to buy vodka but the bottle was too big and heavy.
I think it will help on the pilgrimage.

A business man who also shopped at the Lawson Convenient Store when I bought my whisky, looked at me as if I were an alcoholic foreigner.
What kind of a foreigner buys a bottle of whisky that cost $2.50?

Well, I’ll tell you who would buy a bottle of $2.50 whisky.
A pilgrim who has blisters to heal and cannot buy any rubbing alcohol!

The 38% whisky, which I am sure tastes like turpentine, will be a wonderful lotion for tired feet and will help dry punctured blisters faster.

I was trying to remember when was the last time that I had bought hard liquor and could not recall it.
It must have been twenty years ago, or more.
It has also been awhile now since I have even had a drop of wine or beer.
Drinking alcohol just does not agree with me any longer.

On the other hand, rubbing it on my feet feels good and the only minus is that I have feet that smell like a drunk.
But nobody will smell my feet, even on days when they smell like essential oils anyway…

Today was another rainy day.
We left our backpacks at our hotel in Aki and retraced our steps back to the town of Tano.
We walked from Tano to Tanohama and started climbing towards Kōnomineji, temple 27.

Kōnomineji is a Nansho, a temple located at the top of a tall mountain.
Because of the heavy rain, we hiked along the twisting paved road, and at times the slopes were at a 45 degree angle.
It was a hot and steamy climb.

On our way up, we met Yumiko San coming down the mountain.
She was walking with a woman Henro from Germany.
Both Yumiko and the German woman plan to stop at Kochi.
It is a very long and hard pilgrimage, and many people break it down to sections and do one section per year.

Jules and I have been walking daily for 18 days now, and it feels like we have hardly covered any distance of the island of Shikoku.

Today’s walk was through rice fields and up a thick forest.
In the ancient days, people only climbed to this temple in the morning in full day light, because they feared the haunting demons that were believed to inhabit the area.

When we arrived at the temple, I was surprised to see such a manicured garden, with a koi pond, a flowing waterfall and beautifully trimmed shrubs and trees, creating a topiary masterpiece.

In the Hondo, (main hall) we lit incense, said our prayers, deposited a coin and our name slips (Osamafuda) and chanted the heart sutra.
We are actually getting better at chanting the heart sutra in unison.

We walked down the thick forest path and even though the rain had intensified, it felt magical to walk slowly down between tree roots and rocks.
It also saved us some time instead of twisting with the switchbacks of the very steep paved road.

We walked all the way to Aki to make up the distance that we did not do yesterday.
It was a LONG walk. And our shoes were soaked.
At one point, we walked along the coast on a wide, well designed concrete Boardwalk.
A sign at the beginning of it said that it was the pride of the town.

Jules adds: “The Pacific Ocean, which on a sunny day here is light blue and tropical, is today steel grey, not inviting anyone in for a swim.
The horizon, between rainy sky and Ocean, is a fine, blurred line, barely discernible. The “real world” loses its hard edges, its feeling of finiteness and definition.
What we see is not what really is…”

Then, after a long time walking along the coast, the boardwalk abruptly ended; we would have had to retrace our steps more than two kilometers in order to cross a river and the train track, to rejoin the main road.

We did not want to walk back for so long.
At that time of the day, our feet felt sore and our shoes and socks were completely soaked from the constant rain.

We climbed down from the boardwalk onto the beach and somehow made our way onto an old road, clambering over rocks and scree.
We made our way towards the main road and miraculously there was a ramp taking us up to the road and on towards Aki.

We got back to our hotel and collected our bags.
Then we took the train to Kochi where we will be staying for the next five nights.
From Kochi we plan to walk daily without the weight of our backpacks on our backs.

On the train we met a pilgrim from Indiana.
He was a young man, looking a bit rough around the edges, as I am sure that we look also.

He said that he was camping and that he had only stayed for two nights at hotels, during the weeks that he has been on Shikoku.
Even these hotels were an Osettai (a gift made to pilgrims) which he said was gifted to him by a temple priest.

To me, he did not look like someone who was having a good time.
He said that in order to finish in the time he had planned for the pilgrimage, he has had to take trains and buses between the temples.
Often, he only walked up to the temples from a nearby bus or train stop, or walked between the temples that are close to one another.
His knee was hurting badly and he said that he has twisted his ankle as well.

I asked him what had motivated him to do this pilgrimage but his answer sounded empty and unfocused.
But it is not up to me to judge anyone or their methods of self discovery, beliefs and life choices.
I would not choose such hardships, but he has his own reasons and path to follow.

I remember the wise words of Shabkar:

“Consider the outer world as a Pure Land, a celestial place, and ALL beings in it as perfect gods and goddesses.”

(From “The Life of Shabkar: An Autobiography of a Tibetan Yogi”)

Temple Visited:
None
Overnight at Tamai Hotel in Aki