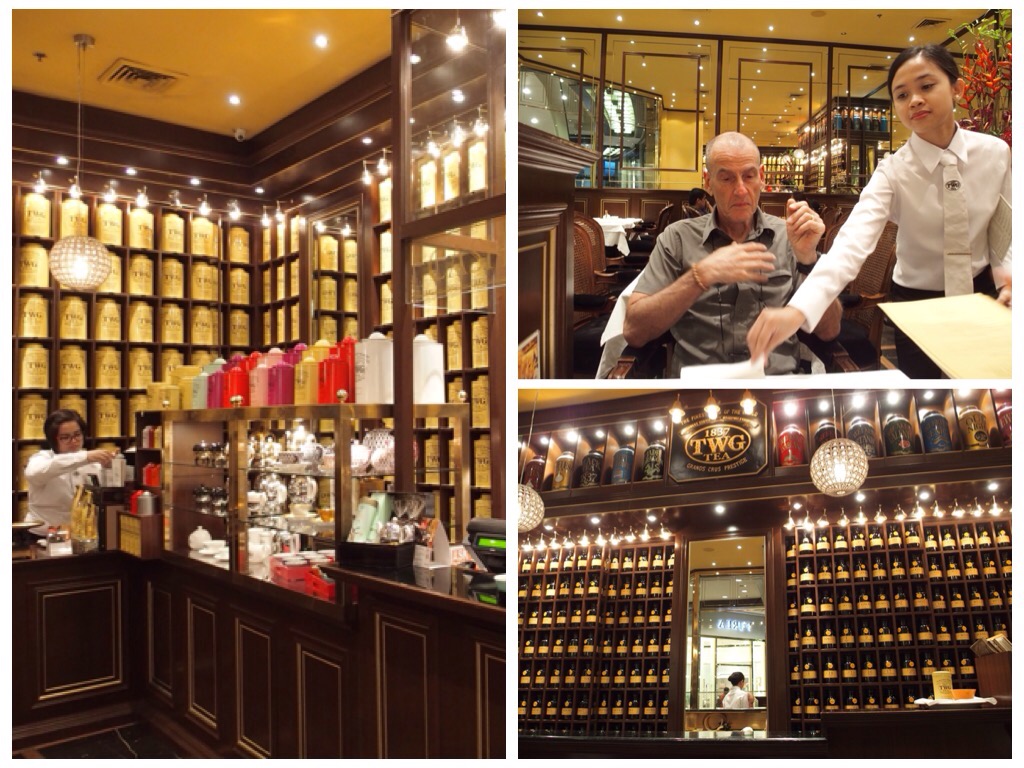 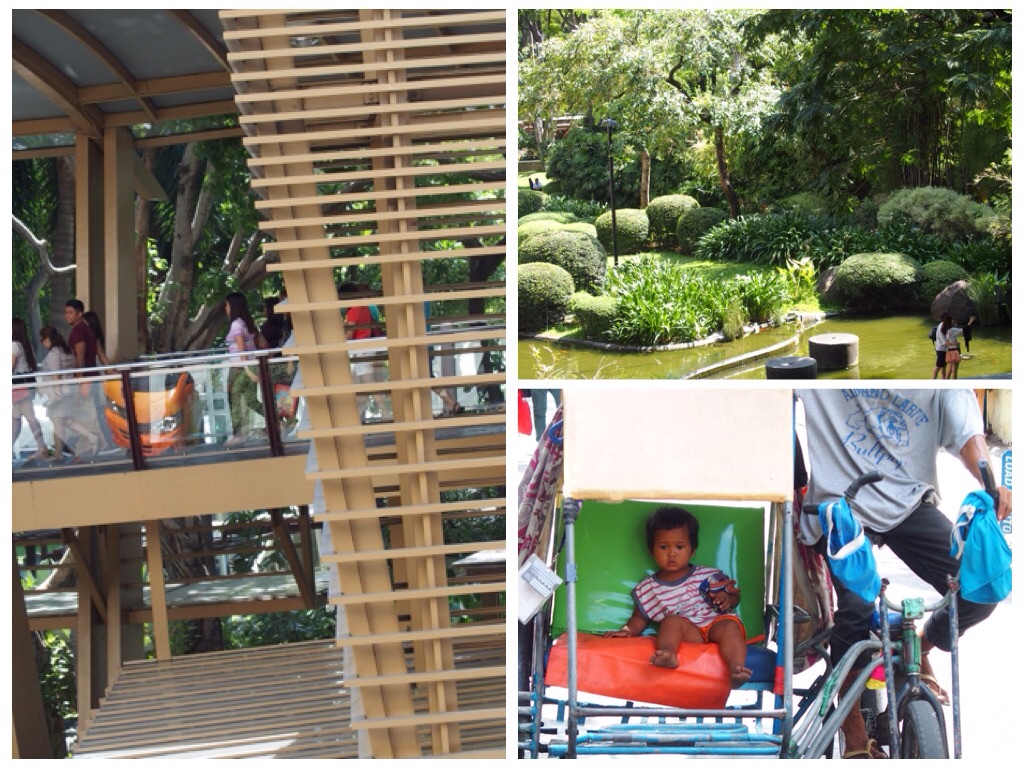 We had only three days to see Manila on this trip.
We thought that it will be a good idea to spend one day sightseeing in the historical part of town, another day to see the new and modern part of town and on the third day, to take a day trip to the surrounding countryside.

We decided to visit Makati, one of the cities in metro Manila which is known as the business and modern shopping area.

The many malls in Makati are connected on the second floor to one another by a walkway, allowing people to walk from one air conditioned mall to the other without the need to cross busy streets and traffic.

These malls offer the highest priced global brands and many designer shops along with every international brand on the planet.

The minimum salary in Manila is 500 pesos per day ($11) which means that the locals cannot afford to buy anything in these malls.
We were told that most locals use these malls for free air conditioning.
Most locals never even shop in supermarkets, everything that they need is sold on the streets for much less; from fresh fish to vegetables to dry goods and sundries.

But we did see lots of people enjoying the malls and plenty of them did seem to buy.
I guess those were the ones earning well above the minimum wage.

In the late afternoon, we stopped for an afternoon High Tea in an elegant tea house with waiters wearing white shirts and white ties.

A tea sommelier was professionally brewing, tasting and spitting every tea pot that he brewed.
We had finger sandwiches and fresh mini scones served on multilayered trays.
It was a delight.

I bought a casual dress and casual shoes, some cosmetics from a friendly girl who chatted with us cheerfully as she cleaned our faces and rubbed creams and body butter into our clean skins.

It was a lovely night and we had a most delicious Veg Thai dinner lounging on outdoors sofas with high footrests.
It felt like we were a million miles away from Manila and already transported to the beaches….
Jules wrote:

The “New” Manila – The Greenbelt in Makati City

Since we had spent yesterday exploring the older and more historic parts of Manila, including Intramuros (the walled city) and Binondo (“Chinatown”), we decided to spend today checking out the area which is not only the financial district of Manila, but also where the younger and trendier Manilenos hang out, the Greenbelt in Makati City.

In a way, our visit to Greenbelt today was dual purpose, since we had heard that this area was a mega-retail destination, and Tali was interested in doing a bit of clothes shopping, while I needed to replace a pair of flip-flops that had broken during the long journey from New Zealand to the Philippines.

Right after breakfast, we stopped by the hotel concierge desk, because we were looking to plan a trip outside of Metropolitan Manila tomorrow. We did manage to find an exciting day trip to Pagsanjan Gorge and Falls, which promises an exciting day of canoeing through rapids, so we signed up, hoping that we will remain the only two on this particular adventure, as we were this morning, at least.

Since it is about an hour’s drive from our hotel on roads not designed for pedestrians, the easiest way to get to Makati is by cab, and so that is just what we did, after we finished our trip planning for tomorrow.

I had no clear idea what Greenbelt was going to look like, other than knowing that it was upscale and shopping oriented.
I was a little surprised to see that Makati City looked not a whole lot different than the rest of Manila, with car repair and detailing shops mixed in with every other imaginable small business, all in pretty run-down low-rise buildings.

But as we got close to this recently built, 1.3 million square foot retail complex, the neighborhood sidewalks and streets suddenly looked refreshed, filled with neatly maintained retail shops from all of the usual high-end suspects, including Gucci, Vuitton, Rolex, and so on.

Greenbelt itself is a series of malls that are interconnected by escalators and covered walkways.
Many of the open spaces between the mall buildings are beautifully landscaped and maintained, so well in fact that the noise of nearby traffic is pretty much inaudible, and the feel of the area is calm and relaxed.

Global mass-market brands of both retailers and cafes are mixed in with high end shops and brand names more familiar to locals than to tourists.
There are outdoor patios by each of the cafes and restaurants at ground level, with almost every table filled while we were there.

Most of the stores were also quite busy, filled with young people and couples who weren’t just looking, but also buying – a sign of growing affluence in Manila, I think.

We heard that the minimum wage in Metropolitan Manila is just a bit less than 500 Philippine Pesos per week (about $11 USD).
Starbucks, which has outlets all over Manila, charges about 200 Pesos for a latte, almost half a week’s wage, and the Greenbelt Starbucks was packed while we were there, so obviously the customers were earning quite a bit more than minimum wage.

We walked around several of the interlocking malls, until we felt the need for a bit of a pause.
Happily, we came upon a TWG tea house, which offers hundreds of tea varieties, and also an afternoon tea break that includes a pot of carefully brewed tea of your choosing, a toasted finger sandwich neatly cut into triangles, and your choice of either scones or muffins, all for 500 Pesos per person.

We sat at a lovely table and enjoyed our break, and also the classical music and opera playing over the sound system – so refined and elegant for a mall store!
By the way, all the tables at TWG were occupied while we were there, and there were potential customers told to come back later, if they wanted to sit and enjoy the tea.

We stayed in the Greenbelt until dinner time, and were fortunate to find a Thai Restaurant that had a vegetarian menu.
The inside air conditioned dining area was fully booked that night, but there were still a few tables available in the outdoor space, one of which we happily accepted.
The food turned out to be fresh, well seasoned, and delicious, and we had a light and tasty dinner.

It was a fun experience to visit Greenbelt today, to escape the heat and get a more well-rounded view of present-day Manila, very different from the historical area with its tricycles, colorful shanti town and old walls and buildings.

← Sights Of Old Manila
A River Adventure in Pagsanjan Gorge in The Philippines, and Thoughts About Tipping →