A visit to a Nomad Family’s Ger Near Harhorim Mongolia 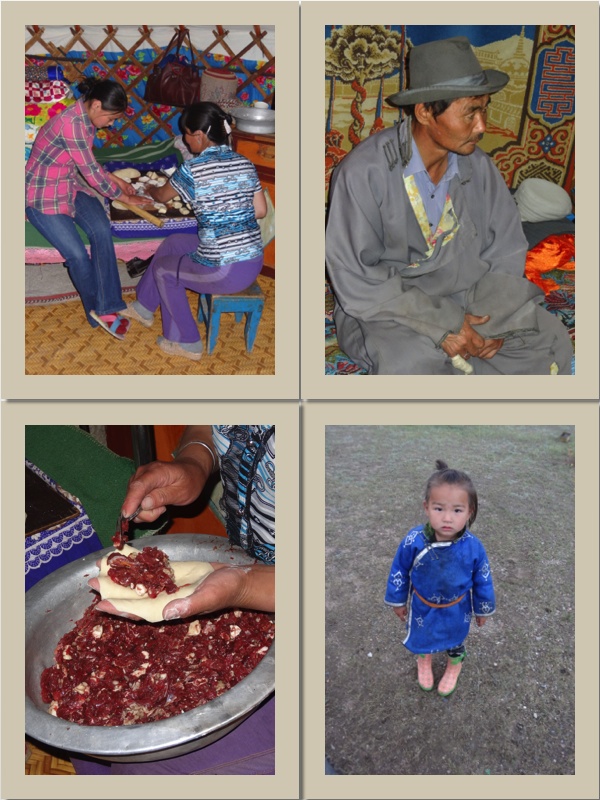 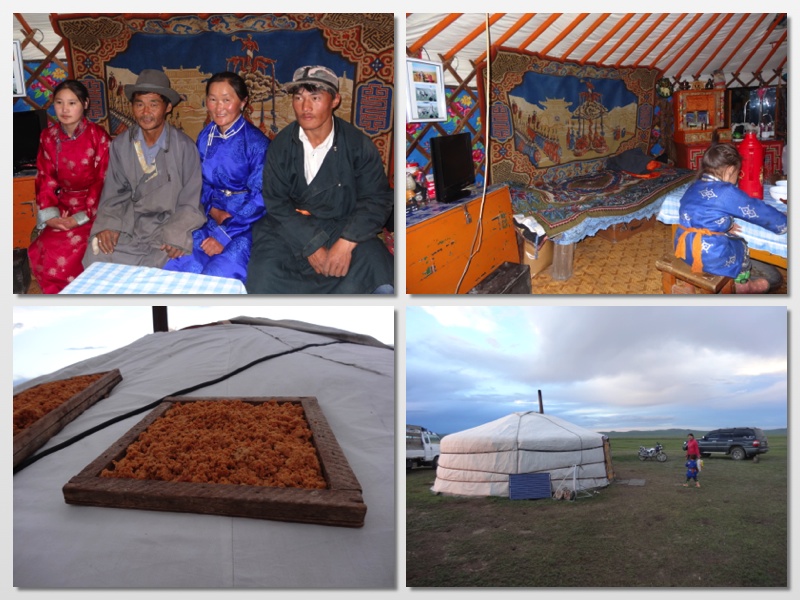 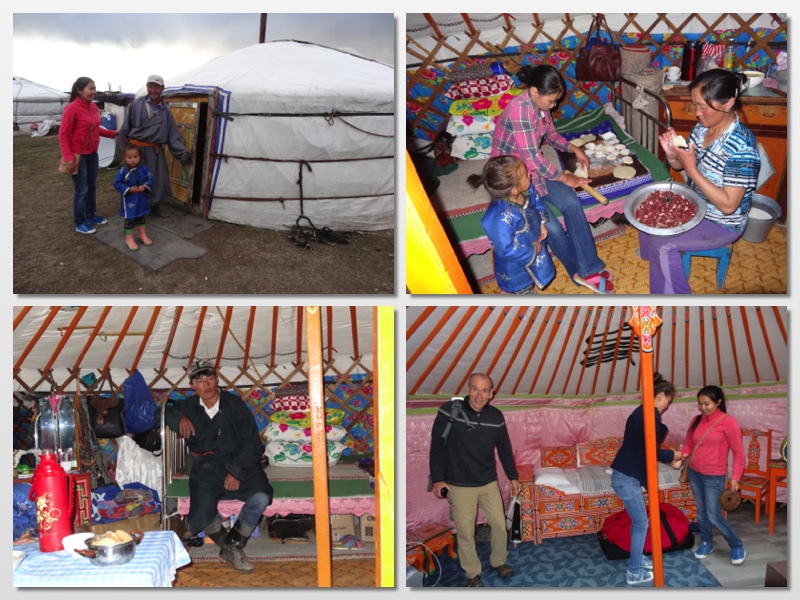 Even though it was fairly late in the evening when we arrived to visit the nomad family in Harhorim, the women had not yet finished their many daily chores.

All Gers have very low doorways, so it’s important to remember to crouch a little, to avoid a painful bump on your head. We lowered our heads and entered their ger, which felt very well organized, clean and homey.

Many ger doors are beautifully painted with Mongolian patterns, in the same colors as the roof posts and support poles.

At the center of the ger, a fire of yak dung was burning in an iron stove with a long chimney pipe that rose through the opening of the “roof.”
The blue flames glowed and danced, and a large cast-iron cooking pan was already sizzling on the fire.

After genuinely welcoming us into their home, the mother and her older daughter told us about their lives, as they wasted no time in idle relaxing.
While they shyly conversed with us, their trained hands kneaded dough into small, round, paper thin wrappers, their fingers pinching fast, their skilled wrists chopping horse meat and their fists mixing the horse meat with sheep’s fat as they made Khushur, (traditional pan fried meat dumplings,) for the next day’s meal.
It was clear to us that there were generations of cooking skill and instincts at work in front of our eyes.

I took an immediate liking to the mother, and felt a sense of admiration for this lady who exuded a soft and strong energy, carrying herself with an erect posture, the straight back of a hardworking woman.
Her eyes were calm, and she radiated integrity.

At first, I was surprised by my instinctive affinity for this woman and I wondered why I felt that she was full of integrity – what was it about her that made me feel this way?…
Was I painting her reality with the rose colors of my imagination….?
Was I imagining what I wanted to see…… Or was I truly having an emotional response to something that I sensed in her presence…..

Later on in our trip, while roaming around Monglia, when we entered other nomadic families’ Gers and saw how other nomads lived, I noticed that I did not always feel such admiration.

At times, we saw dirty Gers with flies drowning in mare’s milk and tables stained with spilled tea, while the lady of the house drank copious amounts of salted milk tea and ate packages of cookies, and I realized that without a doubt I was truly sensing the energies of this elegant and strong lady.

Her younger daughter was just a toddler, yet she was determined to make herself useful, trying to bring in a big bucket of water from the well which weighed almost as much as her tiny body.

Tuya told me that the little girl would soon have her hair shaved.

It is customary in Mongolia to shave once all the hair of young children, so they will not grow up with the same hair that they were born with.
It is believed that birth hair can attract bad spirits.

For girls, they shave their heads at odd-numbered years.
That means that when the girl reaches the age of 3, 5, or 7, they will shave her birth hair.
For boys, it is done in even-numbered years, when the boy reaches 2, 4, or 6 years of age.

The shaved hair is wrapped in a blue silk cloth and usually kept in the ger.

Like everything else, this ritual is done with the prior consultation of an oracle, or a lama or monk, because there are good or bad days to cut the child’s hair, just as there are auspicious and un-auspicious days to travel, to move, to build a ger, etc.

For example, it is considered not so auspicious to build a house in the year of the horse or the cock.
This is because horses are roaming animals and cocks are restless; neither animal promotes stability, and the house, if it were to be built under their signs, might be destroyed.

The older daughter of the nomadic family we are visiting is studying to become a teacher, and was on her school holiday.
Both the older and younger daughters had sweet faces with red glowing cheeks, and both were very, very shy.
They seemed to move with a harmonious, obedient gait, uncomplainingly attending to their long chores.

We were told that the women in nomadic families rise up before sunrise, make a fire in the Ger’s stove, put on some tea and wake up the men, in this case, the father and the older son, who had recently completed his army service.

Then the women start their day of milking (the mares must be milked every two hours, every day!), preparing food, cleaning, washing, collecting dung for the fire and bringing water from the well, not finishing until late in the evening.

By ten thirty at night, they will gather to watch a bit of TV on the solar powered set that they have, and by midnight they will retire to bed.

There are rules and etiquette which are carefully observed in ger living.

All Ger doors, all over Mongolia, face the South.
It is done so consistently, that you can always tell the cardinal directions of a landscape you pass through, by the doors of the nomads’ gers.

Inside the Ger, the Buddhist family’s altar is always placed on the North side of the ger.

In a conversations about our life in America and in New Zealand, Tuya, our guide who also lives in a ger, asked me in which direction we usually place our Ger’s doors.

I had to remind her that we do not live in Gers, and that each person who is building a house places the front door in whatever direction they wish, to suit the lay of their land, their views and their sun exposure.

Tuya told us that in remote parts of the Gobi where she lives, nomads never lock the doors of their Gers when they are away from home.
They do this so that if someone is lost, they will be able to get in, make themselves a fire, a cup of tea and maybe get some sleep.

“Strangers” are not considered as intruders on privacy, nor suspected as potential thieves.
Traditionally, nomads do not knock on a Ger’s door before entering, they simply open the door and enter a neighbor’s ger.

In a later stay in one of our tourist ger camps, I experienced this custom when a Mongolian girl who worked for the camp came to make a fire in our stove.
She simply came in without knocking on the door.
I was only half dressed and she apologized and seemed very surprised.
I assured her that it was OK, and then I remembered that it is often the tradition, not to announce yourself, but to just walk in.

As you enter a Mongolian ger, you will notice that on your right, there is a stand or a shelf unit where the women keep the flour, sugar, salt and oil, along with their dishes and cutlery.

On the left side of the door, right before the narrow bed which also serves as a seat for visitors, there is a space where they keep their milk products and buckets of milk and Airag.

Extra blankets and dels are carefully rolled and placed on the back of the beds.
Most nomads have very, very few items of clothing.

We were quickly offered to share in the simple food that they eat.
There was a dish of a buttery cream which was made by skimming the skin of boiling milk, which was served with a spoon from a communal bowl, with sugar sprinkled on top of it.

A favorite Mongolian drink is a salty milk tea that is much the same as in Bhutan and Tibet, made by boiling black tea with milk and salt.
Often at breakfast time, they will add cold steamed dumplings from yesterday’s meal to the hot tea, as a breakfast treat.

It was very admirable to see how they live in such organized harmony in a small Ger of about 5×5 meters.

In fact, the Ger felt very spacious inside, even though there were nine of us in the small space, sitting and drinking Airag and eating yogurt cookies.

I was thinking about how in our culture, each person seems to demand, almost command (energetically, not in spoken manner), a certain amount of personal space around them.
We feel uncomfortable if someone stands too close to us.
It almost feels like they are violating some unspoken rule about “respecting our personal space.”

Yet…. That night, after we spent some time in the presence of those humble, hard working and warm hearted nomads who live with so little yet with such harmony, I felt that my sense of space was expanding.

Nobody dominated the air…. Nobody “sucked the air” out of the room as the saying goes…And nobody claimed “ownership” of the space or the conversation, nor felt like it was their responsibility to “entertain” anyone…and as a result… By doing so….. it felt like there was SO much space….. space for everyone, and for possibly many more….

It was so interesting to realize how space can be so pliable, and seem to stretch.
That night, sleeping in our Tourist Ger Camp, it felt like our small ger was HUGE….
Bigger than any spacious hotel room.

The fire in our Ger made it warm and pleasant.
I slept well that night having many sweet dreams.
I felt grateful to have Tuya as our guide, grateful for being so lucky to be here now and to enjoy this journey….

← Ulaanbaatar to Harhorim, A Bit About Nomadic Life, The Shankh Monastery and the Kālachakra Tantric Tradition, Mongolia
Erdenezuu Monastery Mongolia →