Gangtok, the Capital Of Sikkim, The Rumtek Monastery Controversy, And Diwali- The Festival Of Light 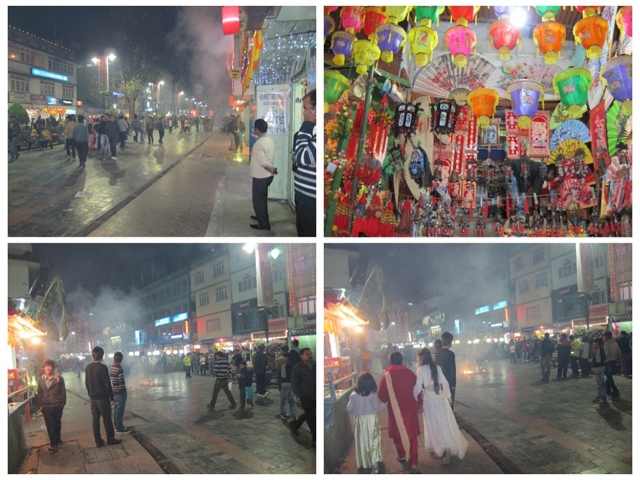 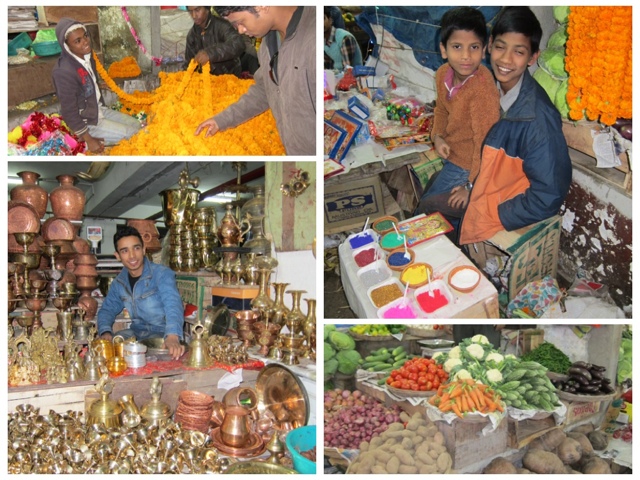 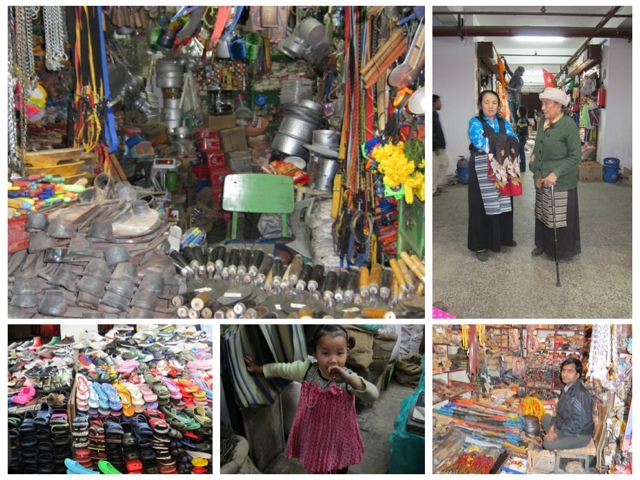 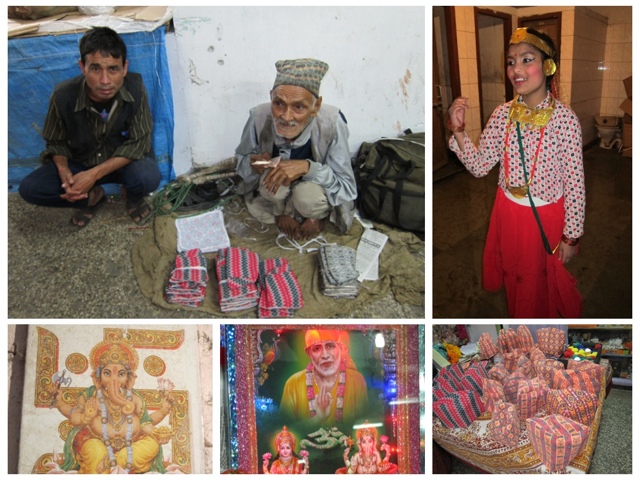 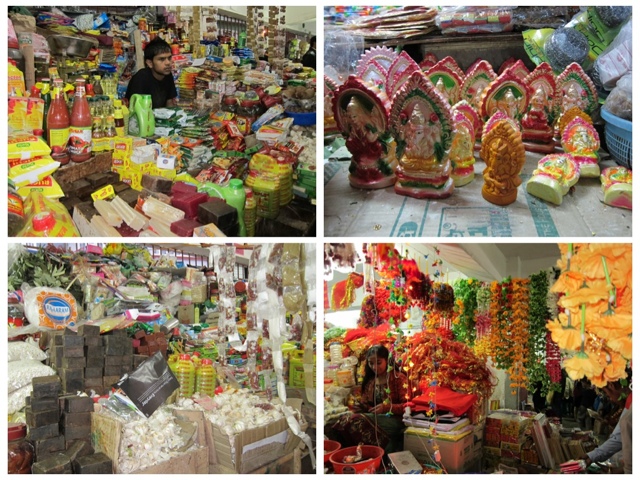 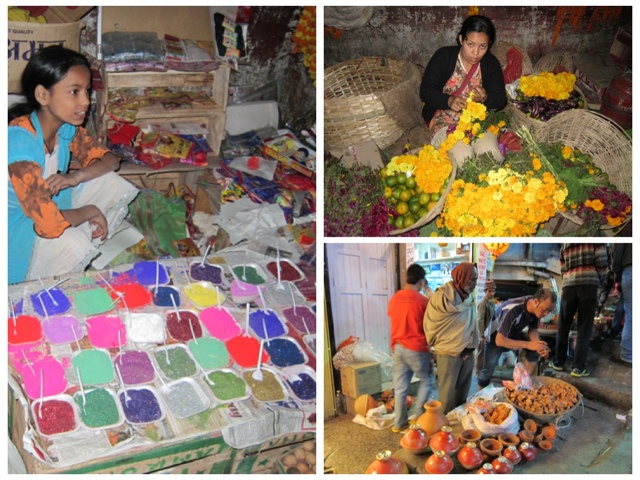 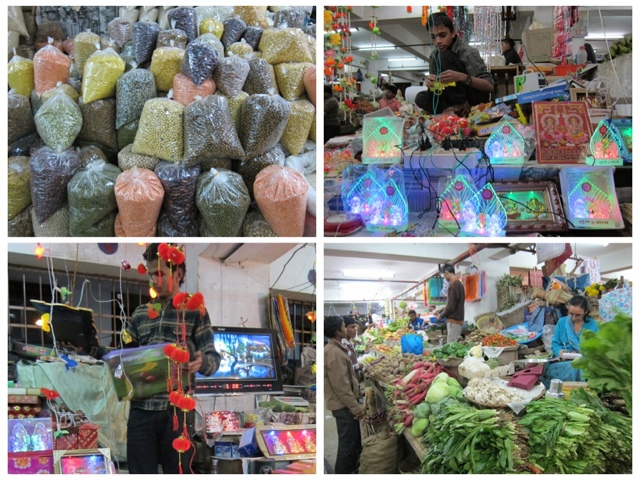 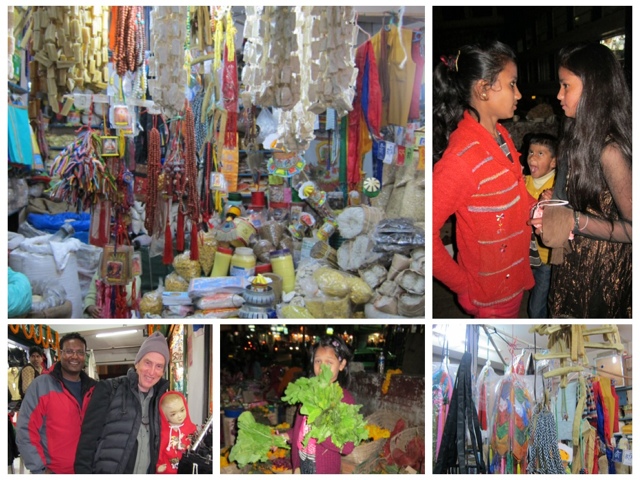 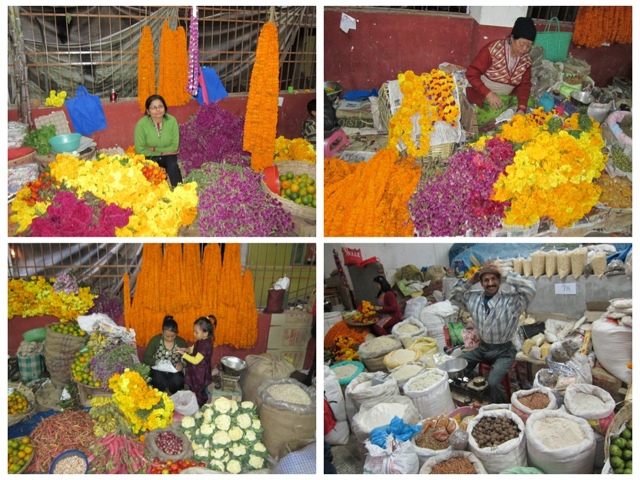 We left the tranquil village of Kewzing and drove to the city of Gangtok, the capital city of Sikkim.The journey took us through a picturesque countryside covered with lush green forests and paddy fields.

The Teesta river snaked below us, and small villages with simple concrete and wooden homes dotted the hills.

We passed through the Temitea tea fields, the only tea estate in the Sikkim region.
The green Camellia fields were edged with pink blooming cherry trees, and the road was shaded by a canopy of tall trees……for a few brief moments I felt as if I were in rural France.

We stopped along the way in a place that manufactures the huge Buddha statues that are usually installed on top of mountains.
We saw how they fabricate and build those giant sculptures.
It is a serious engineering job that requires much more architectural and building skills than artistic or sculptural input.

There is exact measuring and framing, then bamboo and wood scaffolding are constructed and layers of fiberglass are applied, until finally the copper is added as the finishing layer.
The huge sculpture, which is built in sections, will then be cut into smaller pieces and transported, and at the final location it will be assembled again.

Gangtok is a big and busy city, and it was nice to stay in a family guesthouse which was most charming.

The guesthouse was called the Netuk House, and the owners gave us a lovely large room with nice furniture, a good heater and a nice bed.

On a hill above Gangtok, we visited a small Hindu temple that is dedicated to Ganesh, the god with the elephant head.
It used to be a tiny temple famed for being so small, that only one person can enter it at a time….

Apparently times have been good to the Ganeshtok Hindu temple, and they have expanded…. Thus eliminating the only attraction that made this tiny place appealing and the reason to go there!
What exists there now is a large room with a small statue of Ganesh and two monks eager to put a “Tika” on people’s foreheads for money.

The arts and crafts museum in Gangtok offered a great collection of old rugs, Thangka paintings, ritual tools and crafts.
In stark contrast, the museum shop that displayed souvenirs of arts and crafts made today, offered low quality items with little artistic value.

It was interesting to me…. Because even today the cost of labor is low in rural India, yet they do not produce the same high quality, handmade, exquisite arts and crafts.

We visited the Enchay Monastery, which was full of tourists.
Temples and monasteries which are packed with tourists usually are much less charming to visit.
Everywhere there were signs that you mustn’t touch this or do that, and overall it did not have the charm of a small rural monastery.

We lingered after the groups of tourists left and an old monk who was sitting on a bench asked Jules to come and sit by him.

Jules chatted with the old monk, who had just came back from visiting his guru in Darjeeling.
He told Jules that he was tired and had caught a chest cold.

I happened to have a cough candy in my pocket, made from honey and lemon.
I offered it to the monk who took it with the eagerness of a child who does not get enough toys, candy or attention.

The next day we visited the Rumtek Monastery, in the beautiful green hills outside of Gangtok.

The entrance to the Rumtek Monastery was guarded with armed soldiers.
Every one who comes in has to register with an identity card, address, phone and purpose of visit.
Tourists have to register and show their passports.

A long line of prayer wheels lined the walking path from the gate to the entrance of the monastery.

At the entrance, we were searched by more armed soldiers.

The whole mystical and wholesome feeling of the place was taken away by seeing armed soldiers everywhere.

The Rumtek Monastery belongs to the Kargyu sect of Buddhism, also known as the Black Hats.

It is called the Black Hat sect, because the first Karmapa, who started this sect of Buddhism, was approached by hundreds of spiritual deities, while he was sitting and meditating.
Each Deity offered him a strand of black hair.
Later he collected all the strands of black hairs, and made a black hat.

This black hat is believed to carry mystical powers, and if it is not held down by the Karmapa who wears it, or kept securely locked in a box, it will fly away and disappear forever.
This is why when you do see any of the past 16 Karmapas wearing this hat, they always are seen holding it down with one hand.

This special black hat is being kept in a locked box above the main temple hall.

The Rumtek monastery was built as a replica of the Tsurphu Monastery, which was the original headquarters of the Kargyu Sect in Tibet.

The 16th Gyalwa Karamapa, built this monastery after he fled from Tibet, and settled in Sikkim.

The 16th Karmapa has since passed away, and there is MUCH conflict among two groups within the Kargyu sect who are arguing about who should be the 17th Karmapa.

This argument is the reason for the presence of the armed soldiers in the monastery.

The two groups are fighting in the Indian courts as to who has the right to control the Rumtek monastery, which is said to hold treasures estimated to be worth billions of Rupees.

Behind the main temple there is the Dharma Chakra Center, and the Nalanda Institute of Buddhist Studies.
Here monks spend a minimum of nine years of study, followed by three years, three months, three weeks, three days and three hours of meditation.

Behind the main hall there is also a smaller hall which houses a Gold-gilded Chorten (or a Stupa,) which is studded with precious stones and contains the remains of the 16th Karmapa.

The Dalai Lama, who is the head of another Buddhist sect known as Galupa, was consulted as to who should be the 17th Karmapa.
The Dalai Lama had a dream that described the birth place of the next Karmapa, but his vision was aggressively rejected by the opposing group.

The Rumtek temple has beautiful traditional architecture, exquisite paintings, intricate woodwork, and old relics like the ancient Black Hat, along with treasures of gold and precious stones, old manuscripts, statues and icons, but to me, it did not feel as holy and wonderful as the relatively new Ralang monastery, that we saw a few days ago, which was buzzing with life and was built as a replica of the Rumtek.

Jules, who lingered behind me at the golden stupa hall, was invited to enter the innermost chamber and to walk around the golden stupa.
The monk who invited him has a very large physique, and with a warm and friendly tone he asked Jules why was he here and what did he want….

Jules told me that among the precious stones, he saw a few Dzi beads embedded into the gold in the back of the stupa.

The Monastery is a beautiful one, full of young monks who were playing in the garden.
The architecture was wonderful and colorful, with golden roofs and great sculptures.
It resembled the Rumtek and the Ralang Monasteries in many ways.
The main temple hall door was open all the time, and the whole monastery had a pleasant and welcoming atmosphere.

In Gangtok, there is a long pedestrian road which offers a pleasant opportunity to walk, shop and dine, away from the busy traffic.

I bought Jules a pair of sweatpants, a fleece, and got his head shaved.
Jules had his first coffee in weeks, and we ate a veggie burger with fries in the Bakery Cafe.
It was a nice change from eating only Indian food three times per day for so long.

During the two nights that we spent in Gangtok, the celebration of Diwali was going on.
Diwali is the festival of light that is dedicated to Lakshmi, the goddess of abundance and wealth.

The whole city was full of flowers, candles and lights, and all night long firecrackers and fireworks exploded in the sky.
The air was filled with smoke, and the noise was absolutely deafening.

At the end of the pedestrian MG (Mahatma Gandhi) Road, there is a bustling bazaar, called Lall Bazaar.
On any day this colorful bazaar is a visual delight that borders on confusing your senses… But because it was Diwali, it had become a color festival by itself.

The vendors were selling garlands of flowers, and everywhere the smell of flowers filled the air.

During Diwali it is common to get colorful Tikas (dots of color that are put on the forehead), and now many kids were earning extra money by putting up simple stalls with a collection of colorful dust, and yelling “Tika, Tika Tika Tika Tika”…..

Between the vendors selling firecrackers and candles, puja copper props, and wax statues of Ganesh and Laxmi, were the usual vendors selling fresh produce, spices, noodles, rice, dozens of varieties of lentils, cheese and clothing.

The atmosphere did not feel chaotic, but rather exotic, and the people were friendly and lovely.
Not once did I feel that I needed to guard my bag or pockets.

That night I could only fall asleep with ear plugs.
The noise outside and the smell of burning fireworks was too much for me.
I loved the colors and the lights, and I enjoyed seeing the kids and adults so happy…. But to be totally honest….. I was happy Diwali was behind us.

← A visit to a Bon Monastery, Signs and Symbols, The Jewish Star Of David and the Swastika, both are ancient Bon symbols
The village of Lachung and Yumthang Valley, in North Sikkim, India →