Arriving in Morioka Japan, and a bit about trusting the public 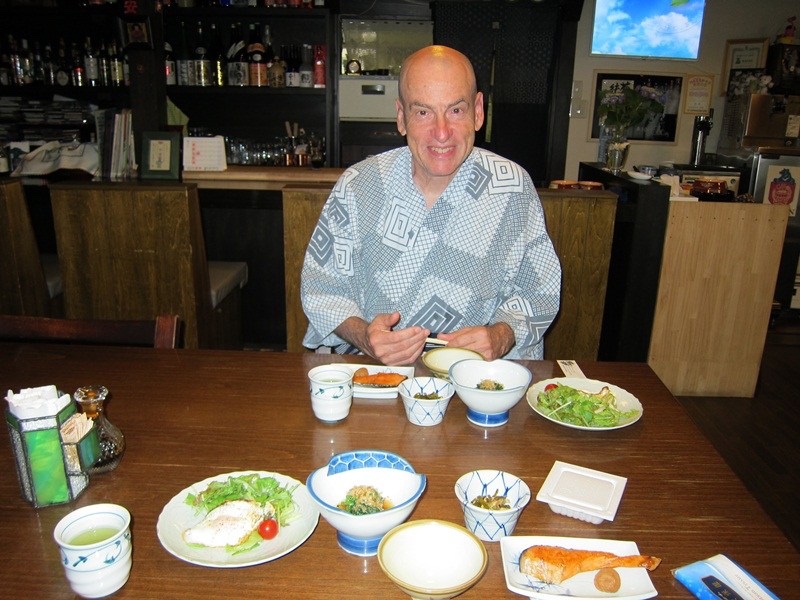 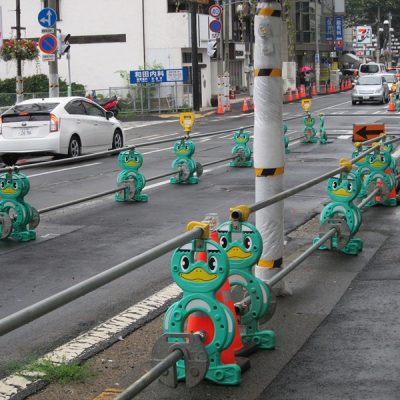 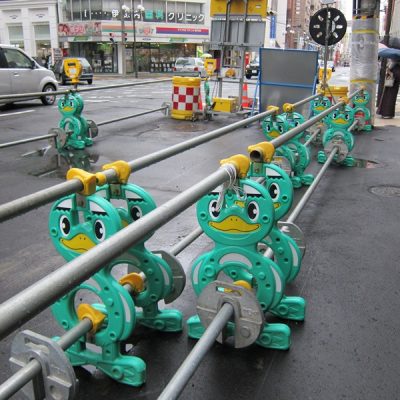 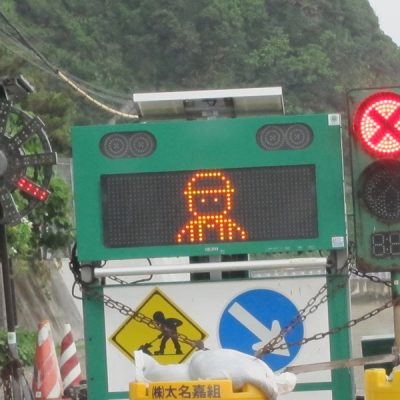 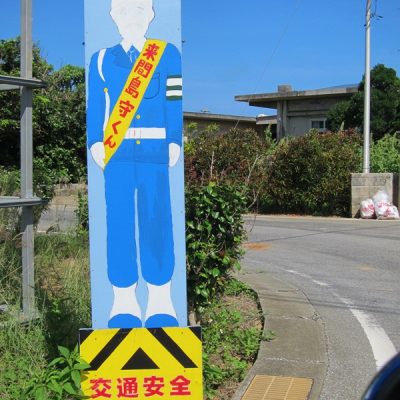 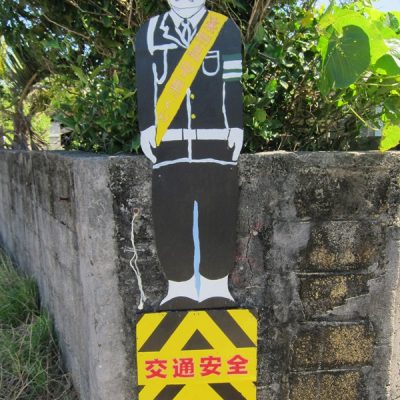 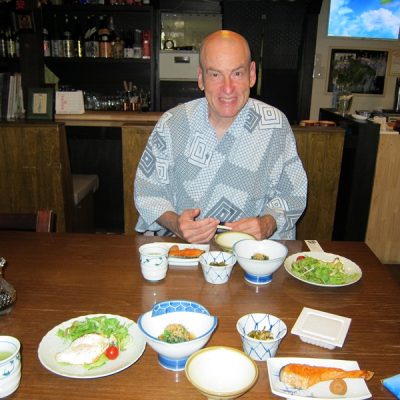 It feels a little childish to be bummed out about the rain, when on the island of Kyushu, which we’d originally planned to include in our trip, there are major floods.

The Japanese TV was reporting deaths and hundreds of thousands of people that have been evacuated from their homes, and footage of cars floating in deep gashing rivers which used to be roads.

Morioka is pretty even in the rain.

We arrived at the JR station and asked at the information center, for an English map and how to get to our Ryokan.
They gave us a a map, and a gift of some coasters, printed in the local traditional way of fabric dyeing.

The Kumagai Ryokan website says that they were located “Eight minutes” walk from the train station.
I Love this about Japan… There is no idle talk or exaggerations… They did not say “It takes about five minutes to walk”…. Nor did they say “It will be about ten minutes by foot…”

It is the same with the express trains and even with the local trains around Japan.
If the train is a minute early, it will shut its engine and wait, so as not to throw off the schedule for the next stops.
If they say that the train will arrive at a certain stop at exactly 10:38, you can COUNT on it being there EXACTLY at the right time.

It used to be the Swiss or the Germans who led the world in precision and in being meticulously on time… Now without a doubt it is the Japanese who lead the world in being so exact and precise.

It is like this in many other areas in Japan.
For example, did you know that a person who applies to become a barista at a Starbucks in Japan, or at any other major coffee chain company around Japan, will have to train for a whole year before they would be allowed to make one cup of coffee?

It is the same with being an apprentice in a ceramic workshop.
I have heard the story of an American woman who was a professional potter, working with clay for many years before she came to Japan to study at a certain pottery workshop.

She became an apprentice, and daily she had many chores to do.

She kneaded and prepared the clay each morning, cleaned the studio, glazed, fired and sold at the shop, but she was not allowed to work on the pottery wheel, despite her vast experience as a potter.

Well…., this is not exactly accurate…. she was allowed to work on the wheel daily, but at the end of each day, every cup or plate that she made, was thrown back into the raw clay mix, or disposed of.

After six months, the cups she made were offered as free gifts to anyone who bought from the store.
The cups she made, perfectly glazed and fired, would be put into a basket by the door, and with much apology for not being so perfect, would be offered as a gift to buyers.

This woman said that she felt she was learning so much more than pottery…. She was a student of Truth…. Learning to let go of her ego and centering herself in Truth… With every cup and plate she threw… She was molding and aligning herself with humility and with the Truth…

We arrived at our Ryokan a little early, but we were welcomed in and shown to our room.
Because the Ryokan was very full, we were given a small room.
Tomorrow…we were promised, we can move into the big room with a separate sitting area and plenty of space.

I did not care much about the small room.
It was raining out and my nose was runny and all I wanted was to take a long nap… Seeing Morioka could wait for tomorrow….

I woke up hours later, and we went for a walk around town.
It felt like the city is small, but lovely and full of services, quiet and very pleasant.

That evening we ate dinner in our Ryokan.

The dinner was good and the place was teaming with local people and travelers.
I enjoyed the roar of laughter and the warm atmosphere, but both of us developed runny noses, so we changed into our Yukatas, took hot showers and a soak and went to bed.

As I put my head to rest on the Buckwheat filled pillow, I reflected on the fact that NOT everything in Japan is thoughtful and wonderful….
Somebody should tell the Japanese that Buckwheat may be great for making soba noodles…. But that it does NOT make a soft and comfortable pillow…. And by the way neither are rice, or adzuki bean pillows…

I reflected about some things that I noticed that ARE better in Japan…
Like public Toilets with a screen that has poetry on it….

Like Toilets that the minute you sit on them start emanating music or the sound of the flowing river, to mask any sound of farting, or pee or shitting….

Like facial masks that come as a sponge paper in the shape of your face, with opening for the mouth, nose and eyes, and are already soaked with the mask material so there is no spillage and no dripping and no waste….

But on the scary side….they do have facial masks soaked with snake venom or bee venom…. But come to think of it, it is EXACTLY like Botox, which is made from snake and bee paralyzing venom, and is so willingly injected by insecure women in our culture, seeking to preserve their youth not through keeping a youthful heart and a joyful and a youthful mind….but through injections and artificial means….

Only in Japan did I see a man walking his dog, while carrying with him a bottle of water to wash off the fence or the poles or the pavement, the smell of his dog’s pee, and of course as mandatory and regulated by the city, also a small bag for carrying his dog’s shit.

In a public toilet, while waiting patiently in line for a stall, a young lady gave me her turn to access the western style toilet, even thought it was her turn to go, so as a foreigner and as a guest in her country, I will not have to use the squat toilet….

Another thing that I’ve noticed about how sweet things are in Japan and how different they are from the way things are done in the USA… is about road construction.

Terrifying the public is not a new thing that started with the unfortunate day in which the terrorist Osama Bin Laden bombed the World Trade Center…and the whole country started dealing with Orange, yellow and red alerts…

It started a long time before that, when the feelings of the public were put aside and no longer considered as important…

While traveling around the USA many years ago, I came upon a highway sign that was posted just before I reached a construction zone, and it said something like:

“Did you know that if you accidentally hit or kill a workman in a construction zone, you will spend YEARS in prison and be liable to pay?”

Now…. I am the safest and slowest driver there is…
I always drive way below the speed limit, and I have not caused an accident while driving in my thirty years of driving…. But I can tell you that I felt fear while reading this sign, and my mind was conjuring up images of the sad family of the person I might have accidentally hurt and of many years of rotting in prison…
It was a regular day of the week, and I had not done anything to feel this bad… Yet this is how harsh things are done and presented in the USA…

In Japan, the construction cones are shaped like a duck or a Bunny… And the construction zone electronic signs have the image of an electronic man bowing to you, apologizing for the inconvenience and for being patient with them, as they make the roads safer and better FOR YOU…

It is NOT effective to scare the people..to terrify the public…
It is best to appeal to their wiser side, and to promote gentleness and responsibility from within, by reminding people of their better sides…. and not to think of the public as an unruly wild beast…which could get out of control at any minute….

Because if you DO think of people in that way, they WILL be that way…
But also if you think of the public as wise and kind, and only needing a reminder to be mindful because you are fixing the road, they will believe themselves to be wise and kind.

It is a fact of life…

Here is what the wise master Lao Tsu, said about governing a country:

“When taxes are too high, people go hungry.
When the government is too intrusive people lose their spirit.
Act for the peoples benefit.
Trust them.
Leave them alone…”

“Governing a large country is like frying a small fish.
You spoil it by too much poking.
Center your country in the Tao and evil will have NO power.
Not that evil is not there,
But that you might step out of its way.
Give evil nothing to oppose, and it will disappear by itself….”

← A day around the beautiful city of Hirosaki, and the Hirosaki Nebuta Festival, Japan
The Serene Hoonji Zen Temple with 500 sculptures of the disciples of the Buddha in Morioka Japan, and a little about how hard it is to teach others →