Okinawa Gyokusendo cave, and thoughts about cooperation and peace 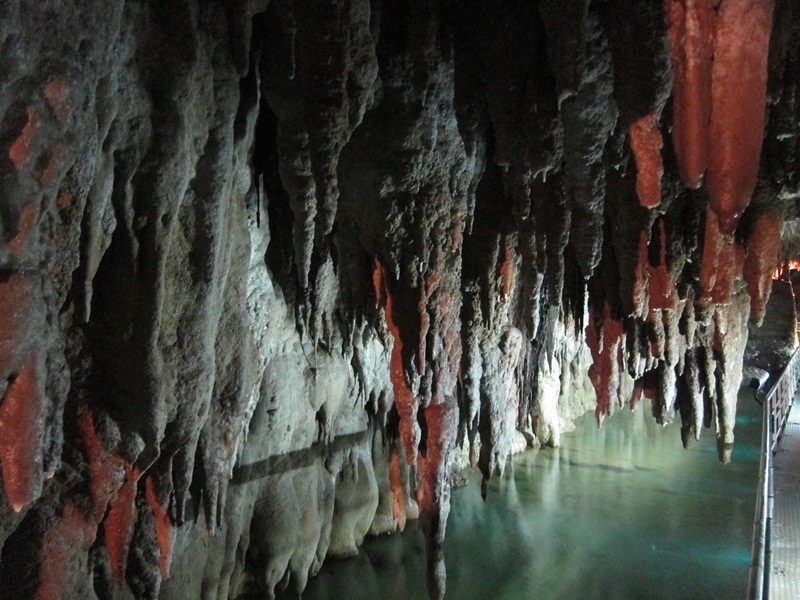 Okinawa has a very palpable beach culture.
The local bamboo flute and string music is sweet, people dress with informal beach wear, the women do not wear makeup, and many go out to eat dinner with shorts and rubber sandals.

The people seem to smile more willingly when they meet my gaze.
The locals seem to be less concerned with proper Japanese etiquette and with rigid ideas about beauty, than you will meet in other places and on the main island of Japan.

It was a very rainy day, and the world heritage ancient prayer site that we attempted to visit in Chinen, was closed due to danger of flooding and strong winds.

We drove along the southern east coast of the island and stopped to look at the beaches that were empty because of the storm.
It did not feel like a festive day.

We stopped at Mibaru beach at a cool cafe called “Hamabe No Chaya”, and had a light lunch and some tea, in front of the ocean.
There among other a handful of other tourists, we watched the beach through a window dripping with rain.

We visited “Gyokusendo” which is a park with a five kilometer long cave, that was discovered deep inside the forest.
This magnificent cave is hundreds of thousands of years old, and it is filled with stalactites and stalagmites.

Now it is a major tourist attraction with large busses shuffling tourists back and forth.
Still, seeing the cave and walking inside it, was very an impressive and heart expanding experience.

The cave is a wonder of nature… The stalactites and stalagmites resemble intricate sculptures, as they drip down from the ceiling, or grow up from the ground.

These elongated conical shaped stalactites and stalagmites, grow only one millimeter every three years… And when you see some of these massive shapes, you become aware how ancient they are…. It is truly a thing to behold….

The Ryuku islands were once an independent kingdom with a ruling dynasty, but the islands were conquered many times over and many wars raged on this soil.

The last battle which started when the Japanese attacked Pearl Harbor, was won by America (if you could believe that anyone can “win” a war…) and America established army bases all over Okinawa island.

Even after the US agreed to give the ruling of the island back to the Japanese, the army, navy and air force, kept their bases all over the island.

Years ago, unruly soldiers raped an Okinawa girl, and it brought many people to the streets to demonstrate against the US army presence in Okinawa.

The USA pledge to pull soldiers out of the island, and the Japanese government pledged five Billion dollars to assist the US army in the process.
An initial number of soldiers left Okinawa (some say 10,000, some say less), but this is only about a fifth of the amount of US soldiers that are still stationed on the island.

It felt a bit depressing to realize that it is an occupied territory of a kind…
With a very sensitive political arrangement, in which the US is still occupying a part of Japan…

We were curious to see the neighborhoods that mushroomed around those US bases, to service the soldiers stationed there.
We drove to see the Kuzo Neighborhood which was renamed in English: “Okinawa City.”
The streets were lined with many tattoo parlors, bars and plenty of gentlemen-clubs, which is a nice word for “Nude strip-clubs.”

The show girls working in those places looked exactly like any show girl around the world, with perky implanted breasts, striking dyed hair and a perfect figure…except for their slanted eyes, petite size and dark complexion, which made them distinctly Okinawan girls.

The main street of Okinawa city, also had many shops selling clothing for larger size army guys, and even a dozen of Indian tailors, offering custom made clothing for plus size men.

The area had a seedy and unpleasant feeling to it, and we did not even stop to take a stroll, but quickly passed through it.
My heart was feeling a bit heavy…

I said a prayer for all humankind to stop fighting in wars…. And for human nature to evolve and grow and to stop being so covetous, fearful, argumentative and greedy…

May peace spread all over the earth…
May peace fill our hearts and flood our minds….
May we know the everlasting Light of Love and the eternal Peace that is our True Nature….
May we know and understand that we are ONE…

It is well known that civilization evolve in direct relation to the individual growth.
Mankind must develop the willingness to co-operate with one another.

One of the great hindrances to the progress of human civilization, is the perceived conflict between interests and welfare of countries, and individuals.

No civilization can last long unless its educational methods and religious ideals inspire a high type of intelligent thinking and devotion to international interest.

Just like in business, when all parties have to win, in order for the deal to go through, so it is with our ways of thinking.

We must grow beyond selfish narrow interest and hold those of everyone in mind and understand that on a small planet, what is good for one- is good for all… And what is harmful for one – is harmfully for all.

Without this sort of intelligent thinking and cultural solidarity, all nations tend to disintegrate as a result of provincial jealousy and local self-interests.

The maintenance of all of civilization, is dependent on human beings learning how to live together in peace and fraternity.

Without effective co-operation, all of civilization is jeopardized by the dangers of narrow mindedness, and the tendency to distrust those who seen as “different from us.”

Nobody is different from us…
We are ONE humankind and we must see that!

Why do we not like it when people are so different from us, when in fact it is our differences that make life interesting?

Would I be traveling to distant places to enjoy different cultures if they were all the same as I could see in Michigan or in Colorado? Of course not!

We travel to explore places and cultures, BECAUSE they are different.

We must celebrate our diversity…. It is what makes a market…. It is what adds color to life… It is ultimately what will ensure our survival as a human race….

← A Hike To Hiji Waterfalls and A Visit To Cape Hedo, Okinawa
Okinawa Japan “Bise” fishing village with shaded corridors of trees… And reflections about body consciousness… →

2 Comments on “Okinawa Gyokusendo cave, and thoughts about cooperation and peace”