A spontaneous Tajin cooking lesson, on the road in Morocco 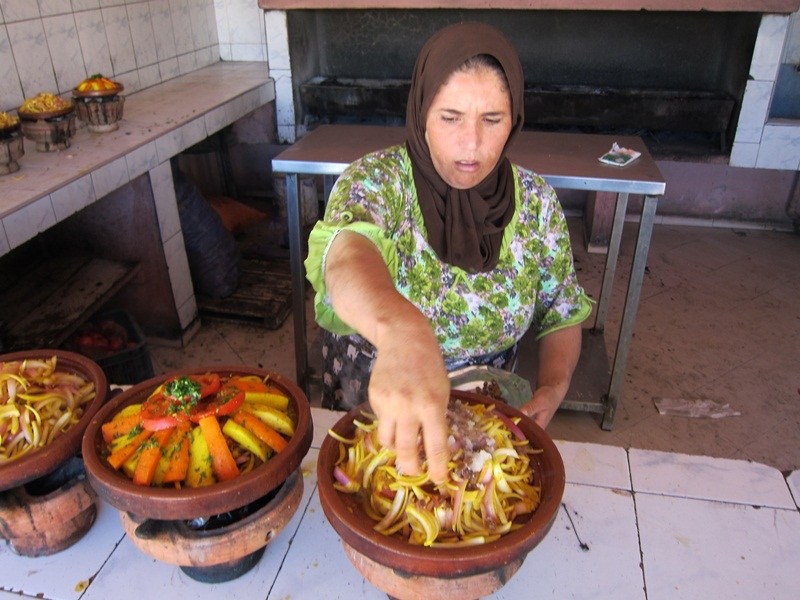 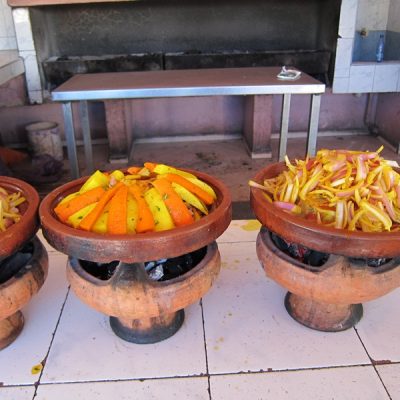 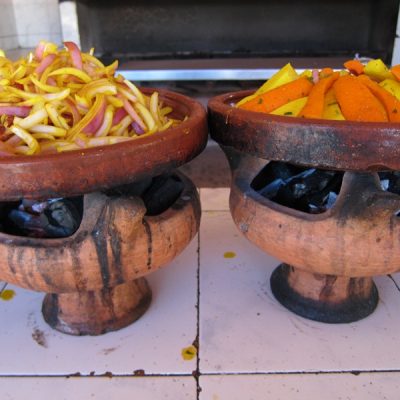 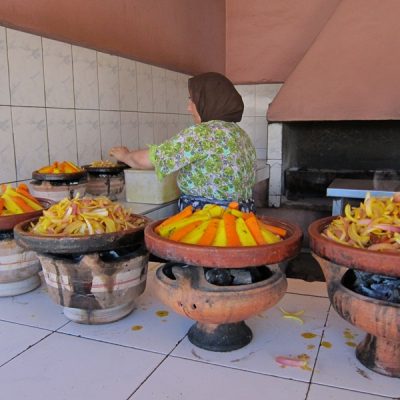 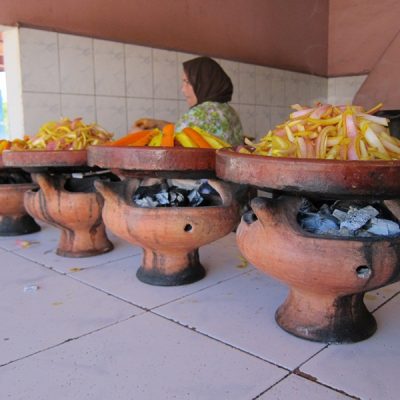 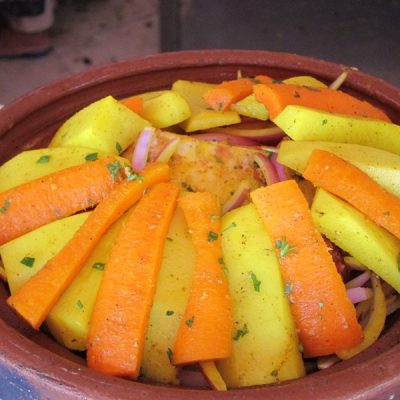 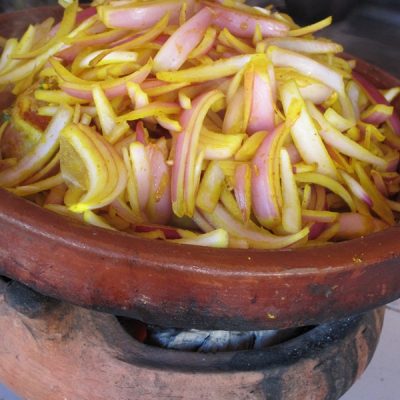 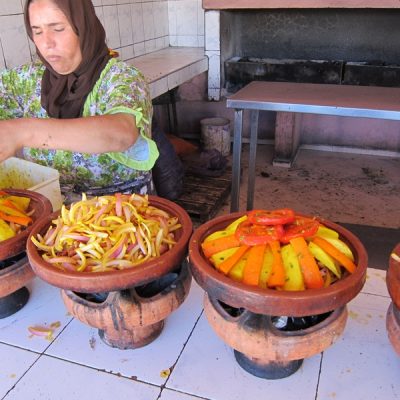 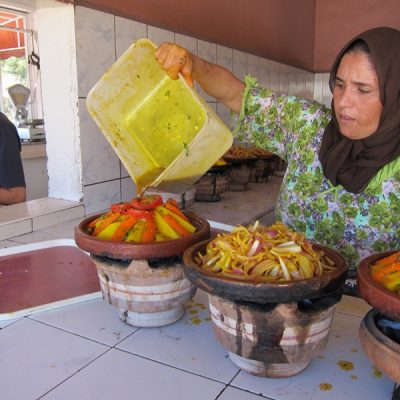 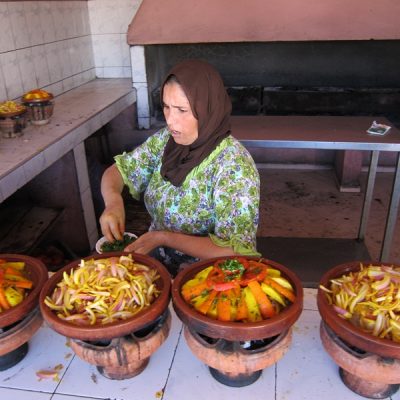 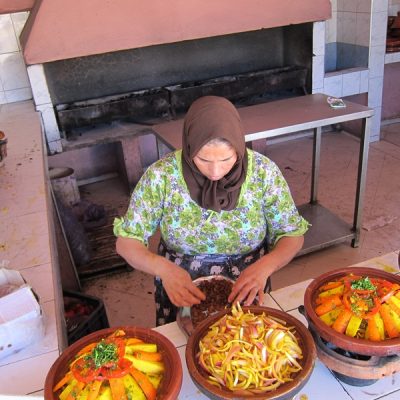 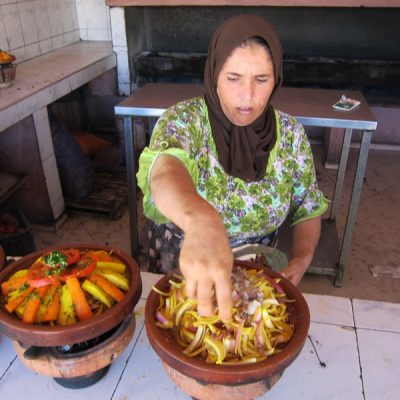 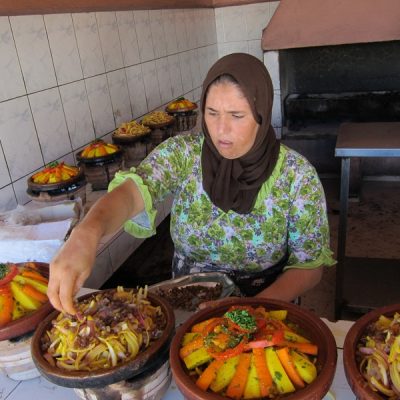 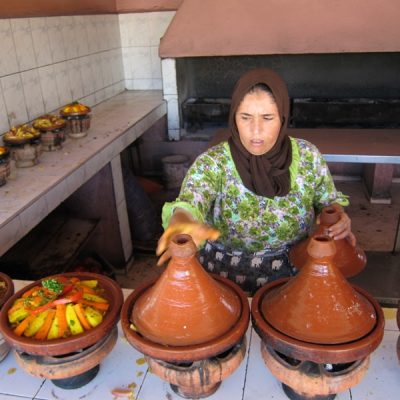 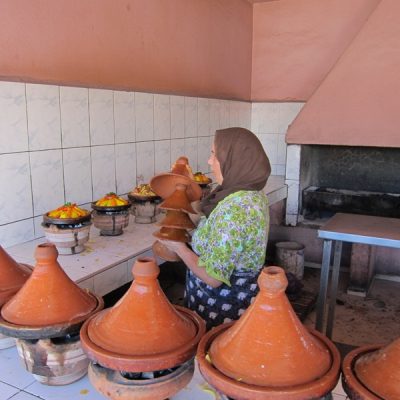 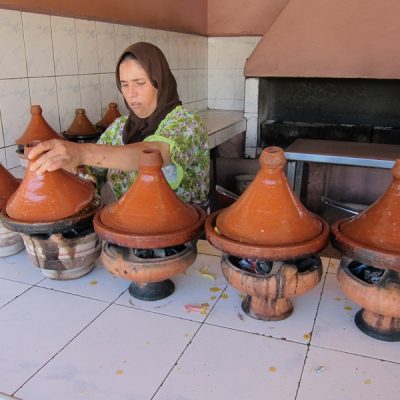 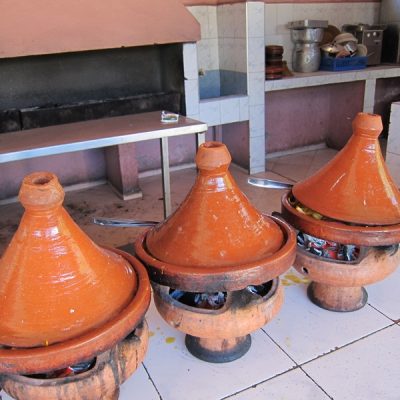 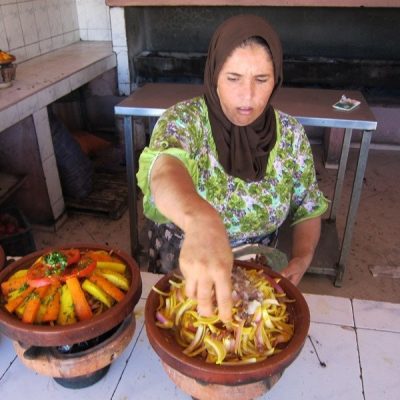 We intended to take a cooking class while in Morocco, to learn how to cook a few dishes of this healthy and delicious cuisine.
But until now, everywhere we stayed, it just did not happen….

We had so much to see and to do, or the people spoke very little English and did not offer cooking classes.

Many times in life, you do not have to put much effort, strive or arrange for things.
You simply have to have the intention in your heart, and allow the Universe to help you and fulfill your wishes.

On a drive through the countryside, we came upon a rest area, and standing behind an open counter kitchen, we saw a woman making Moroccan Tajines, done in the traditional way.

Funnily enough we pulled in just in time when she was preparing two kinds of Tajines.
One with meat, onions, and sweet raisins, and the other was with chicken, vegetables, onions, tomatoes and herbs.

We stood there observing the preparations and learning how to make Tajines.
She worked fast, but in a methodical manner.

The traditional Tajine starts with the correct heavy earthen pottery.
There is a base that is filled with coals, and a deep clay plate, that sits on top of the base with the coals.

This deep clay plate, is layered with the ingredients and covered with a special conical shape clay cover, to slowly cook the food in its juices in the dish.

Usually in tajines, less-expensive pieces of meats are used, like the neck, shoulder or shank of lamb, cooked until it is falling off the bone.

Moroccan tajines often combine lamb or chicken with a medley of ingredients or seasonings: olives, quinces, apples, pears, apricots, raisins, prunes, dates, nuts, with fresh or preserved lemons, with or without honey, and with a complexity of spices.

“Ras El Hanout” is Arabic for: “Top Of The Shop”, referring to a mixture of the best spices a seller has to offer.
It is a popular Moroccan blend of spices that is used across North Africa.

There is no definitive set combination of spices that makes up “Ras el Hanout.”
Each shop, company, or cook have their own secret spices combination, some containing over a dozen spices.

Some recipes include over one hundred spices, some unknown in the Western world, like ash berries, chufa, Grains of Paradise, orris root, Monk’s pepper, cubebs, and dried rosebuds.

Usually all ingredients are toasted and then ground up together.

Back in our spontaneous cooking demonstration, for the meat, onions and raisin Tajine, the lady placed a small spiced piece of meat at the center of the dish, with the coals already burning.

She then layered thinly sliced potatoes and covered the whole lot with a generous amount of thinly cut onions.

She washed the raisins and removed any particles and stems.
She mixed the raisins with sugar on a stainless steel plate, and sprinkled them on top of the Tajines.

She covered the Tajine with the conical shaped covers and placed a spoon between the cover and the plate, to allow a small amount of the steam to escape.

For the chicken and vegetable Tajine, the lady placed a small piece of chicken in the center, and layered the vegetables around it.
She used carrots, pumpkin, and potatoes, and alternated them around the chicken.

She then placed some sliced tomatoes on the top, sprinkled the dish with fresh chopped parsley, and poured a small amount of chicken soup spiced with the mix of spices on the top.

She then covered the dishes with the conical covers as well.

The dish will come out with the bottom a bit burnt, the onions very browned, and the whole dish will be moist and stewy.

Tajine is eaten all over North Africa, like Algeria, Tunisia and under another name in Egypt as well.

In rural parts of neighboring Tunisia, some people place a shallow earthenware dish over glowing olive wood.
They fill it with the ingredients, cover it with a flat (not conical) earthen pan, and then pile hot coals on the top as well.
The resulting Tunisian tajine is crusty on top AND on the bottom, and very moist inside, and is infused with a subtle smoky fragrance.

← Trying to shed some light on superstitions
From Chefchaouan to Meknes via Volubilis, Morocco →