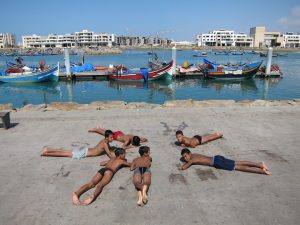 The morning started slowly.
After breakfast, we caught up on some of our computer work and organized our photos.
We also paid a visit to the local Hammam on our street in the Sale’ Medina.
A Hammam is a local communal bath house.

Jan, the owner of our lovely Riad, gave us large plastic buckets, a low plastic stool, and a container with Beldhi soap, which is a pasty soap made from black olives.
It has the consistency of dark Dates or Tamarind paste.

The men’s Hammam is located right next to the women’s Hammam and they both share the same heating.
The women’s Hammam had plain tile floors and three large rooms which were supposed to vary in temperature.
I went straight into the warmest room, but it was not very hot and definitely not steamy.

I was told by Rachid, the owner of our Riad, that they heat the Hammam by burning wood, and that if there are not many people there, they save on the costly wood.

I was hoping to get the customary body scrub with a “Kissa” which is a black very rough scratchy glove that the attendant uses to scrub your skin, but the attendant looked deeply asleep and not very willing to move.
I am sure that my Hammam experience will get better along this journey.

One of the exciting things about exploring a new place, is to dare to break out of your regular patterns of behaviors and defenses, and to allow new experiences to carry you.

So when Jules suggested that we eat lunch at a tiny hole in the wall, I was more than willing.
Usually, we are very fussy about eating in clean places, and resort to eating from street stalls, only when the food seems inviting and extremely clean and fresh…..with no flies….

The lady owner, spoke a smattering of English and welcomed us into her tiny place.
Her place had only a small kitchen, a fridge filled with three kinds of drinks; Cola, Orangina and mineral water.
Next to the fridge was a narrow counter screwed to the wall and four bar stools.

Her food display case had only a few offerings, but they all looked fresh.
We ordered two plates with a combo of everything she had.
Her mother who was wearing a veil and full length Jellaba dress, peeled the roasted green pepper and removed the seeds with her stubby fingers.

The food was delicious, which was great, because we were closely watched by the lady and her parents, with every bite, for any expressions and signs of appreciation or dissatisfaction.

When we left, she said that she is open for dinner, and that if we do come back, she would cook for us anything and everything we may like…..

“Think of my kitchen as YOUR kitchen” she said with a sweet smile that exposed a set of very large teeth.

Further down the road, we found an outdoor cafe filled with men drinking black coffee or mint tea and smoking.
We took some available chairs, Jules ordered our mint tea and black coffee, while I made my way across the street to the bakery to buy some cookies for us.

The bakery was busy.
The glass case was filled with cakes and slices of desserts, all looking good…..EXCEPT………… Except for the hundred of bees who were sitting on each frosted cake and on every creamy surface.
I opted for the cookies that were fully covered on trays on the counter….. They had no visible bees or flies.

After some hand signage and rudimentary Arabic, I was able to score a bag full of a variety of cookies for $3 and made my way across the street to join Jules at the cafe.

We left our rental car behind, and took the electric tram into Rabat.
In a busy market we bought the bathroom gloves used in he Hammam, an oil with extracts of red roses and an oil called Argan.
Argan oil is extracted from the kernel nuts of Argania Spinosa (Tree).

Argan oil is used in cooking, and is said to be as healthy as olive and coconut oils, but beside its culinary use it is mostly known for use as a cosmetic aid.
In fact, it has gained so much popularity that it is now called “Liquid Gold” for its numerous cosmetic uses.

Argan oil has long been used as a beauty agent by Berber women.
It is applied as a facial cream instead of the modern day pricey packaged and perfumed facial creams, to sooth wrinkles.
It is also traditionally brushed into hair to help repair brittle, color damaged and frizzy hair.

By the end of the day we ate dinner at the Rabat Marina.
There were many choices of places to sit, and it was scenic and the food was fresh, but I have to admit that I preferred the yummy lunch we had in the hole in the wall…

That night I lay in bed, listening to what sounded like many dozens of stray cats outside our window.
There were moans of cats in heat and screams of cats fighting, as well as hungry cat cries.
The cat cries and moans mingled with late night street life and talks outside the window.

Some of the local people in the Medina, live in extremely small places.
Six or seven people share one room with no shower, just a squat toilet and a tiny kitchen.
They use the nearest Hammam for showers and spend most of their time outdoors.
They hang out late into the night with their friends, playing, talking and even studying…. Public life is a much better choice when you live in such crowded quarters.

As I tried to ignore the MOANING CATS outside my window…. I recalled this joke:

A wife that was always complaining, went to the market, where she heard that her husband was cheating on her.

She decided to confront her husband, and when he came home, she said:
“I am not asking you IF you cheated on me, I am asking WHY, you did it…. Was I not a good wife? Cooked for you, raised the kids well? Loved and honored you?

The husband admitted that it was all true…. But squeamishly he said:
“Yes… I cannot deny that you have been a great wife, even though you DO have a tendency to complain ALL THE TIME…. but this is NOT why I looked for pleasure in other women’s arms….. It is because…. Because…. Because when we make love, you are SO SILENT…. You say nothing to entice passion…. You do not even moan in pleasure….”

The wife looked offended and said:
“This is not a reason to cheat…….. you should have told me that it makes you unhappy……….. I can moan… I can show you that I can moan…let’s go make love right now, and I will show you.”

They went into the bedroom and started making love.
When he kissed her ear and touched her breasts, she asked if she should moan now?….
He said not yet…

When his excitement built up, he said: “Yes, now, you can moan, NOW…”

← Beautiful Rabat, Morocco
From Sale’ to Assilah along the beach road, Morocco →