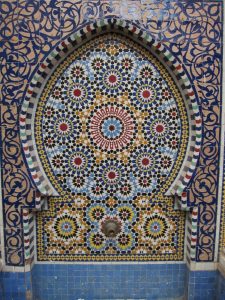 The flight on ‘Air Maroc’ from New York to Casablanca took about seven hours.
When we landed and made our way down the airplane to the exit door, I noticed that all the seats and the isles were filled with litter.
Newspapers, plastic bags, wrappers, left over food and all sorts of crap were spread EVERYWHERE…

I have flown many times in my life, yet I have never seen a plane so messy and filthy upon arrival as this flight was.
I hoped it was NOT a sign of things to come…

Our car rental company had no counter desk at the airport and it took us awhile to call and to track down the agent.

As Jules was strolling up and down the airport, trying to find the agent, I tried to hook us up with a mobile 3G Internet modem for our computers, since we did not make any advance plans and instead planned to look for places to stay and what to see on the fly, by researching things online while on the road.

The Morocco Telecomm agent tried hard, but was unable to get his wireless modem on our computers to work.

After a few phone calls, the car rental agent met us at the arrival hall and we signed the papers sitting in the small car while an early rain made the day grey and wet.

The car we reserved was a VW and it looked nice…. but they did not commit to the VW model that we saw on line, they said that it will be this…. Or something “Similar”…..

The car we got is brand new.
It has spent only one week driven on the road, but it is only a little bit bigger than a toy car.
Surprisingly, I felt comforted by its small size, feeling that it will be easy to park and easy to navigate around.

We bought especially for this trip, a small GPS loaded with maps of Morocco.
The GPS computer voice assuredly guided us out of the airport and into our hotel in the middle of Casablanca by the old Medina.

We took long luxurious showers and collapsed into the soft sheets for a long sleep…. Oh, how I love afternoon naps…

We got up and decided to go for a walk to see the city and to try to sort our Internet access problem.
We came upon a modern phone and internet solution store called Zen selling service from the provider named “INWI”.

A knowledgeable young man named Rachid got our new 3G modem to work in ten minutes…PLUS, he helped us install local micro- sim in our IPads, so we can browse the Internet while in Morocco for very little money.

We went for a stroll in the old Medina in Casablanca.
A Medina is an ancient city surrounded with walls, and it is the heart of each city all over Morocco.

Luckily, the French Colonialists did not destroy the ancient and crumbling Medinas around Morocco, because they were always heavily populated and the French did not wish to anger the locals too much.
Instead, they designed and built their own “Nouveau Cities” just outside or around the old Medinas.

Every Medina has a few gates which are tall and large enough to allow merchants, supplies, horses and donkeys in and out.
Cars are not usually allowed into the narrow streets of the Medina.

Every Medina is a town onto itself.
In Hebrew, the Moroccan-adopted word “Medina,” means a “Country,” referring to the sovereignty of each Medina as self-contained, and offering all that the locals needed for living.

Most of the ancient Medinas remain standing, although many of the centuries-old houses are in very run down condition.
Renovated houses which have been restored to their original glory are often used as B&Bs and small boutique hotels.

Every Medina must have five elements in it:

1) A local bakery, with a variety of freshly baked breads, and which the locals use to bake their own bread.
They bring their baking trays filled with their own home made bread to be baked in the bakery’s ovens.

2) A Mosque.
Larger Medinas have more than one Mosque to allow easy access so the people living in the other parts of the old town, do not have to walk large distances five times a day for prayer times.
Some of the Mosques are beautifully decorated with intricate ceramic tile designs which are hundreds of years old.

4) A Fountain – which in old times before plumbing was introduced, was where the locals got their drinking, cooking and washing daily water supply from.

5) A Hammam – which is a communal bathing house.
Each Hammam has rooms similar to a sauna in varying degree of temperatures.

The Medina in Casablanca has a large market in it.
There is a section of it which sells beautiful elongated Tajine clay pots, and Moroccan pointy house shoes made from colored leather, and traditional clothing laced with beadwork.

The other part of the Medina, is filled with quick merchants selling fake designer goods like Dolce Gabbana belts, jeans, shirts and fake Gucci sunglasses.

We wandered into a cafe and had one of the best vegetable Tajines we have ever had.
They served mint tea in small pots with ornate glassed on individual trays.

We tried some nougat from a street vendor pushing a wooden cart.
The nougat is a taffy like candy which is made from honey, nuts, sugar and egg whites.

In a narrow alley in the Medina, I saw one of the most odd and mysterious sights of my life.
A man was walking on all fours…… He peeked at the edge of a dark alley, rummaged through the trash that was left there and ran back and disappeared into the black alley.

I could not see his face, but I did notice that he wore semi new black pants and a white shirt.
By the fact that he moved fast, I concluded that he was fairly young… Maybe in his mid forties…. He definitely looked as if he walked this way all his life…

It made my heart stop…..
I stood there looking into the black alley… Waiting for him to come out… But I knew he wouldn’t… He seemed to find comfort in the darkness, away from prying eyes.

That night I had a hard time sleeping….
I wondered if it was the extra long afternoon nap… Or was my mind overstimulated by the sights…

Wishing you a great day filled with love and light, wherever in the world you are at….
Tali