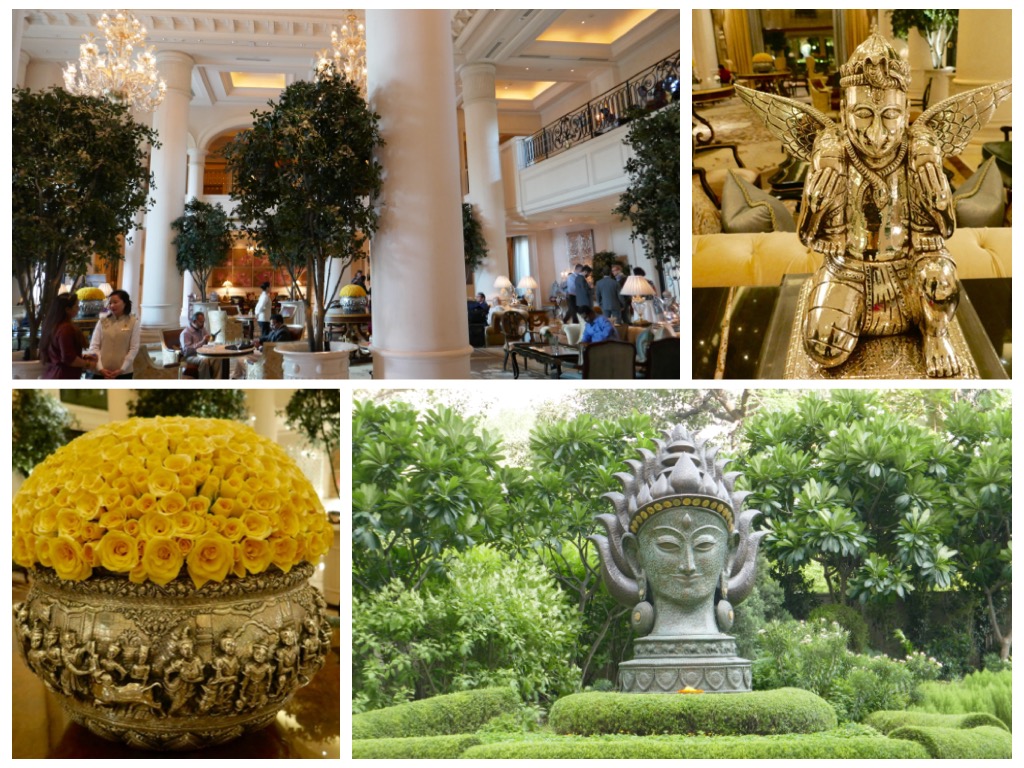 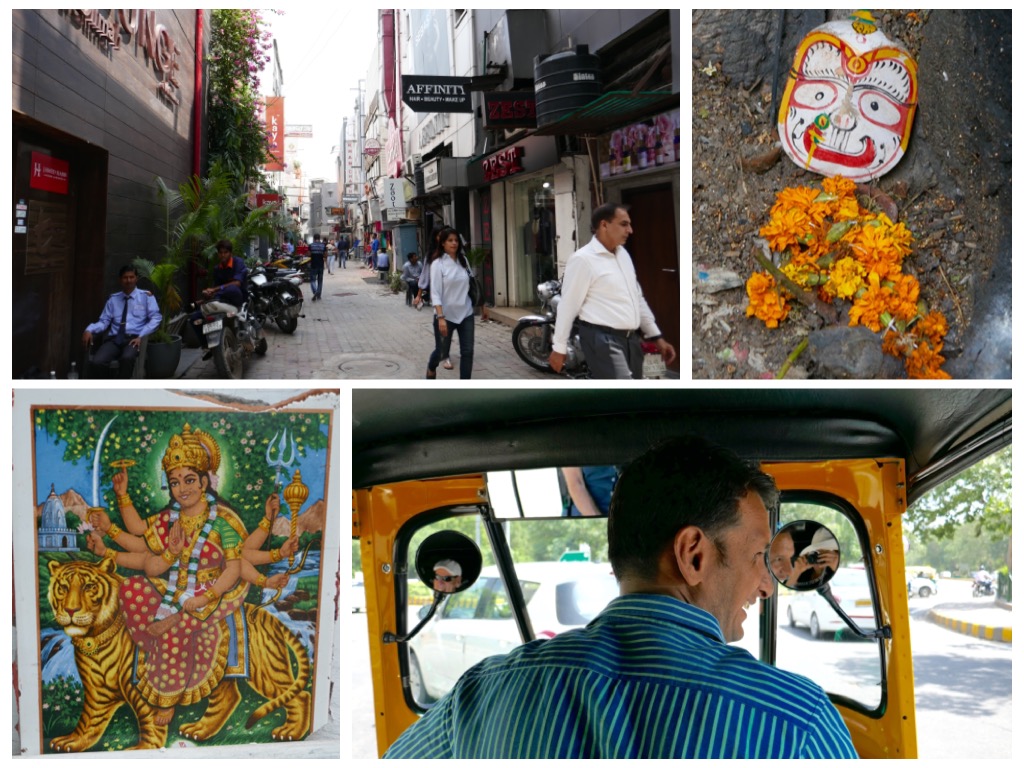 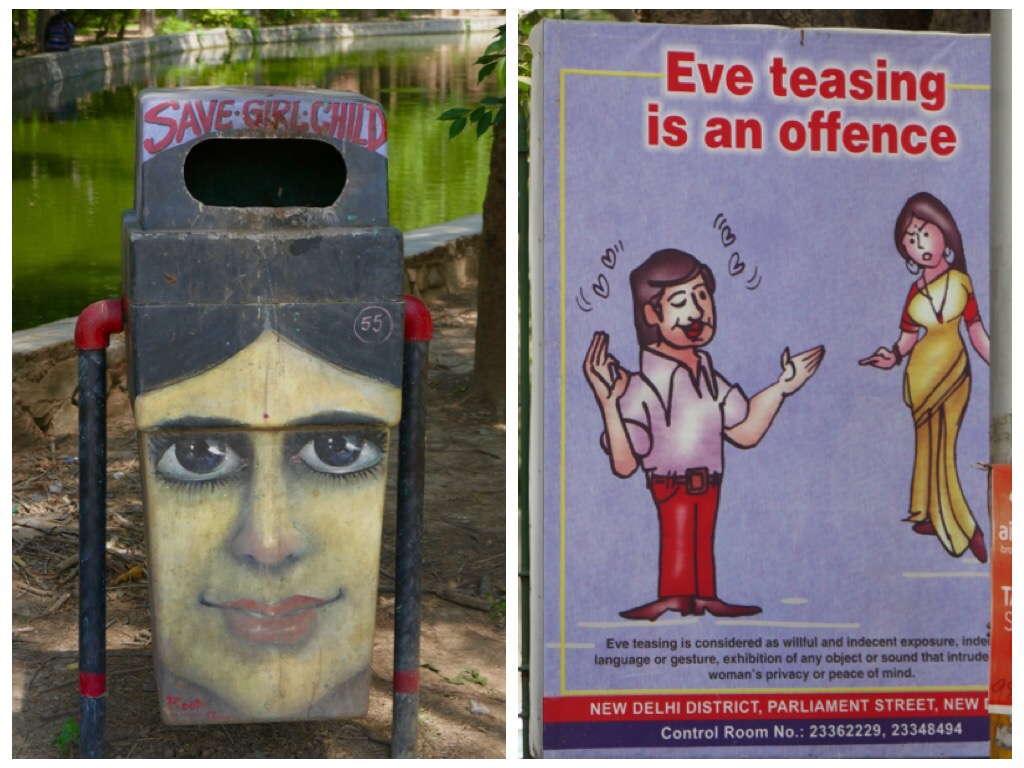 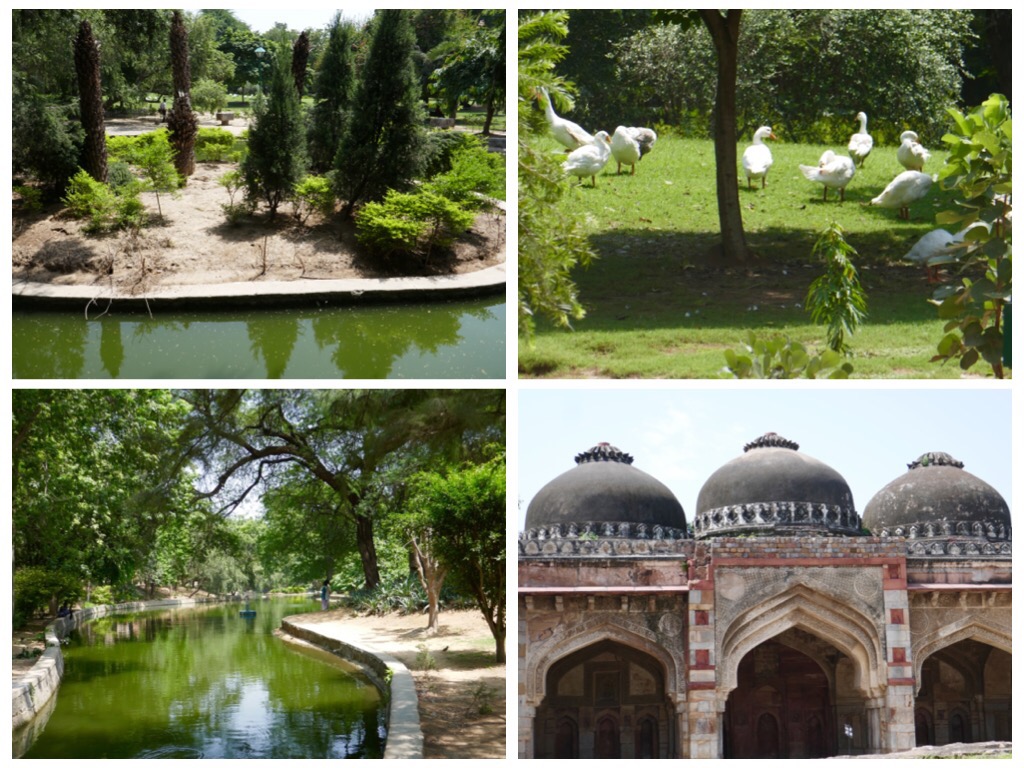 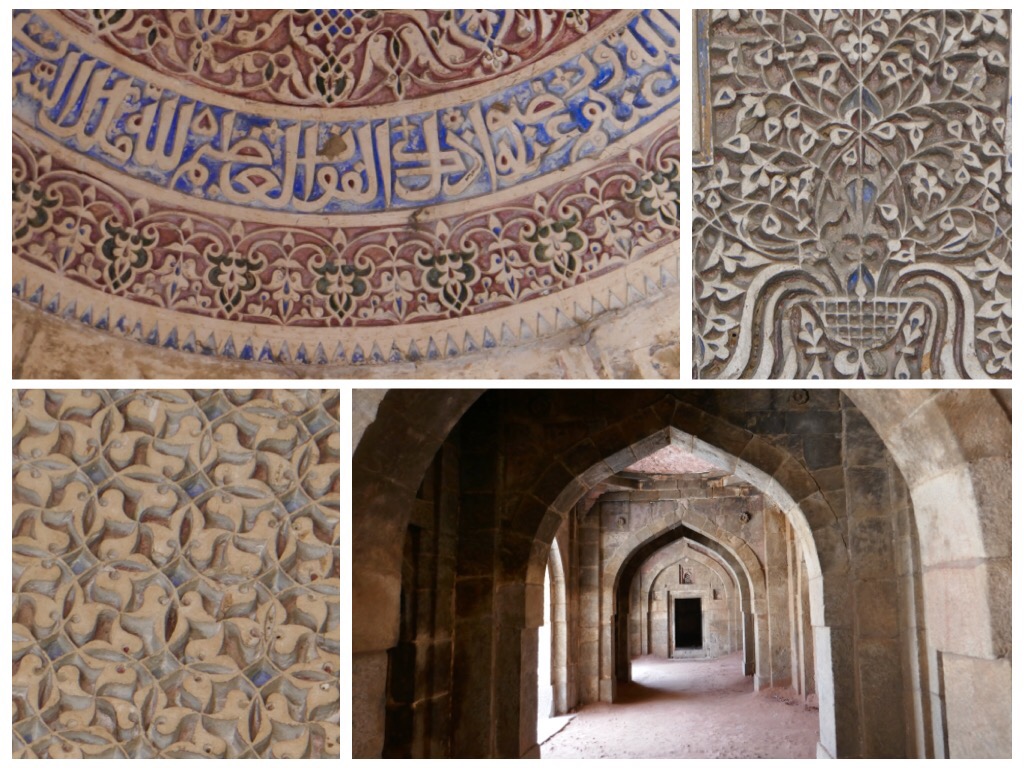 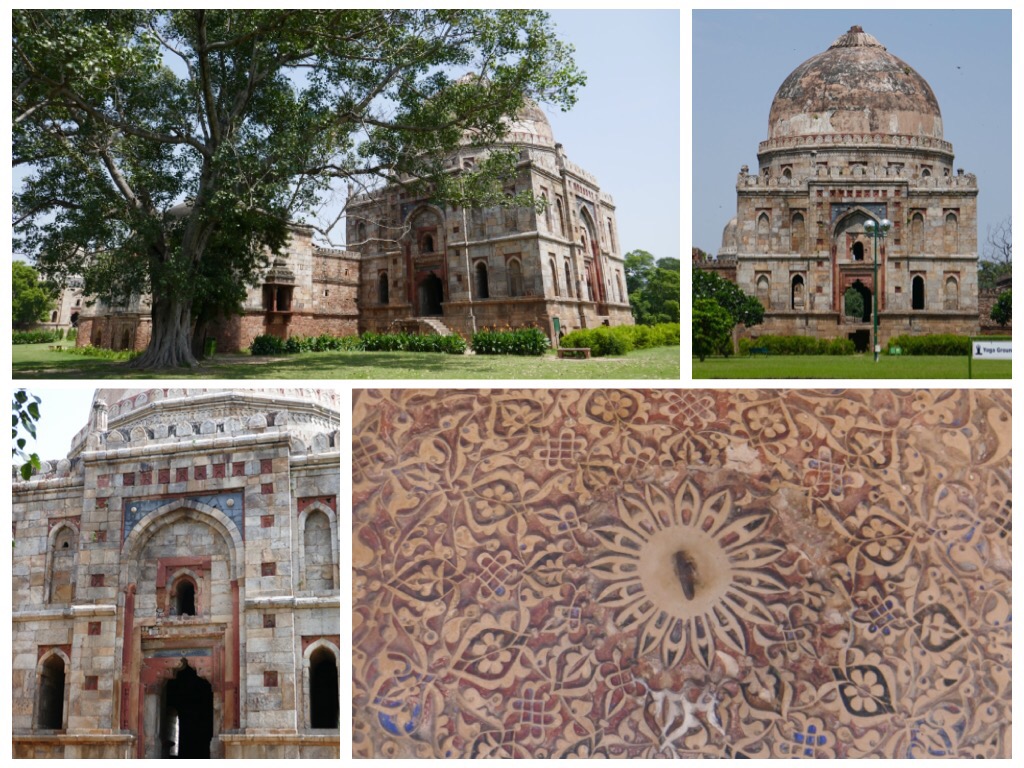 We chose to stay for a few nights in New Delhi, on our way to Ladakh.
During our two previous visits, we saw most of Delhi’s breathtaking old monuments, visited the markets and spent time in the museum, so this time we only wanted to adjust to the difference in time zones, before flying to the high altitude area of Ladakh.

At the airport, we were met by a polite man wearing a black suit who escorted us to the hotel’s luxury car, with a uniformed driver who took us to the Leela Palace Hotel.
Chilled bottles of water and icy face towels awaited us in the car.

The Leela Palace made us a great offer to upgrade the room that we had originally booked to one of their larger club rooms, which included airport transfers along with daily use of the club lounge, which serves food and drinks five times per day.

At the entrance gates of the hotel, each car is checked for explosives.
Even the hotel’s own car gets checked, for fear of terrorists who might have planted a bomb under the hood or in the trunk.
At the door, they screened our bags and hand frisked us, but after we were through the front door, it was as if we had landed in a lavish kingdom.

The hotel is beautiful and is kept to the highest standards.
Employees constantly dust and wipe the marble elephant sculptures at the end of the pillars, or pick up leaves that the wind blew on the manicured green grass.

The lobby was humming with people, most of them employees of the hotel, greeting people, cleaning, clearing, serving, putting a tikka dot on our third eye and draping garlands of fragrant jasmine flowers around our necks.

The hotel has two uniformed employees whose job it is just to greet the guests going into the elevators.
They press their hands together and greet you every time you get into the elevator with: “Namaste madam, Namaskar Sir!”

The concierge team at the hotel is very helpful.
We wanted to change some of our dollars into Indian rupees.
Since the exchange rate at the airport was not very good and the hotel’s exchange rate was even worse, we asked for directions to a nearby bank.

The concierge offered to send a messenger to the bank for us and quoted a very good exchange rate.
We agreed.
We handed a fair amount of money to the concierge and went upstairs to the club lounge to have high tea, which included gourmet sweets (too bad we’ve cut back on sugar!) and delicious small sandwiches.

About thirty minutes later, the concierge returned with a large stack of cash.
We gave both him and the messenger a tip, although we knew that the concierge may have already gotten a good cut from the exchange rate, since it was obvious that he had not sent the messenger to a bank but to an exchange shop.

We did not mind that he may have benefited twice.
After all, we had gotten a very good exchange rate and the whole transaction was hassle free and easy.

We had dinner that night at the hotel’s elegant restaurant which, as we remembered from previous visits, was fabulous.
We ate a dish of Kashmiri Morel mushrooms with garden fresh peas, a house made hung yogurt dish sautéed with tomatoes, spices and fresh pomegranates, and a dish of baby eggplants with South Indian spices.
Everything was served in elegant silver and spooned again onto our plates after just a few bites, by the friendly waiter.

Despite our plan to lounge around the hotel’s pool and in the club lounge surrounded by wealthy Saudis with their teams of Thai nannies, one for each kid, we wanted to walk.
After all, one cannot eat five times per day and only rest.

So the next morning, after a wonderful breakfast, we decided to go for a walk, to a cafe that offers a hundred kinds of teas and is attached to a book store, about a two hour walk from our hotel.
I had planned a walking route via Lodhi Gardens, a green and beautiful gardens in the middle of the city with an old Mughal tomb and the remains of an old mosque.

At the hotel’s gate, a rickshaw driver named Babi, jumped at us and begged us to give him a job.
Despite our insistence that we wanted to walk and our repeated attempts to shake him off, he begged to drive us to Lodhi Gardens, for only a hundred rupees (about a dollar and a half.)
Jules seemed compassionate towards Babi and accepted his offer.

Once we arrived at Lodhi Gardens, Babi begged again, this time to meet us at the northern entrance to the gardens and to take us to Connaught Place, the location of the tea room and bookstore we intended to visit.

We refused, saying that we wanted to walk.
Babi was insistent and tried all sorts of persuasive techniques.
He said:
“You are old, sir.
I am not being mean, old is gold, but in this heat, sir, you cannot walk.
You will faint.
Today is 40 degrees, very, very hot.
Yes, I know, sir, you said that you had walked 1200 kilometers in Japan, but India is NOT Japan.
Here in India, the touts will jump on you and accost you, sir.
Thieves will rob you.
They will snatch your bag and run, sir.
I am not trying to frighten you, sir, but you obviously look like soft tourists and you will be an easy target, sir.”

Before we left the hotel, we had talked about whether we should walk the streets with thousands of dollars in my bag, or leave the money in the hotel’s safe deposit box, as most tourists do.

We decided that since the Universe is NOT at random and accidents do not really happen, they are CAUSED, and since we have such good karma, and since we create our own reality, we were NOT going to get robbed.

We talked about the fact that we must stay alert and walk with heightened awareness, instead of becoming suspicious of everyone and worried.

So, despite having lots of cash in our bags, we refused Babi’s offer and started walking.

Walking in the heat was almost unbearable.
Lodhi Gardens offered lots of shade and a nice pond with white geese.
Nearby, we stopped at another cafe called the Turtle Cafe, located above a bookstore in Khan Market, and had some fresh pomegranate juice and a rest from the heat.

The Turtle Cafe had a sign that said: “We do not have wifi, please talk to each other!”

Another sign on the wall had a poem about how you can never lose your ruby sandals.
It explains that the ruby sandals represent your true Self, which you can deny or even be unaware of, but never lose.

As we neared Connaught Place, the touts and scammers started coming out of the small alleys.
ALL Human Beings have a spark of the Divine in them, but those who are ignorant of their Divine nature can sink lower than the animals, seeking shady opportunities and settling for little scraps.

Some of those people had menacing and dangerous looks on their faces, but others looked kind, which told me that you cannot judge people’s intentions by how they look to you.

Most touts tried to lure us into nearby travel agencies, or warn us of thieves and pickpockets, or tell us that the streets we wanted to cross, were closed because of a Hindu festival or a Muslim demonstration or because of the danger of thieves.

We had to remind ourselves that all this had happened ONLY when we reached Connaught Place, and that most of the day we had walked without anyone trying to harass us, but it still felt very unpleasant.
We reminisced about how in Japan, if someone approaches you, it is ONLY to help in some way, or to extend a blessing.

At Connaught Circle, it was nearly impossible to shake the touts off, so we ran off to take refuge in the cool AC of the Starbucks.

We did not feel like continuing to walk in the heat, so we decided to go back to the hotel to enjoy afternoon High Tea.

Catching a taxi or a rickshaw proved not so easy at Connaught Circle.
Oh, there were hundreds of rickshaws and taxis buzzing around, but many of them were scammers as well.

On our first attempt, we agreed on a price with a driver with shifty eyes..
An uninvited pimply young man joined the ride, sitting next to the driver.
They pretended that the rickshaw had broken down right next a travel agency.
“Come, come,”
They said
“Here the agency can arrange for another rickshaw.
Prepaid this time at an Indian rate, not at the tourist prices, come, come.”

It took us all of two seconds to figure out the scam.
We did not lose our cool nor say anything, we simply got out of the place as quickly as we could and hailed another rickshaw.
This one, happily, took us straight to the Leela.
The price was: “As YOU wish Madam, as you wish.”
I wished 200 rupees ($3.5) which made him glow with gratitude.

On our third and final day, we did not even venture into the streets of Delhi.
Instead, we spent the day luxuriating pool-side, on the roof of the Leela Palace.

The word Leela (also Lilla), means “Play.”
“Play” refers to all of reality, including the Cosmos, with the play of the different planets and stars.
On earth, “Leela” means the creative play of the Divine Absolute, or God.

So instead of venturing out into the hot streets, we ate a leisurely breakfast, put the ‘Do Not Disturb’ sign on our door, and meditated.

At the pool, we were presented with a “Pool Basket,” which included cold lemonade, many bottles of mineral water, newspapers, icy chilled face towels and an Ayurvedic suntan lotion.

The pool guys shooed away the pigeons that were hanging around the spotlessly clean pool.
We lounged on daybeds under a private shaded gazebo, while other European tourists sat baking in the sun, working on their tans.

Before we started our trip in India, we reminded ourselves that we must ask for a shift in perception.
We must learn to “See with our Second Attention.”

The ‘Second Attention,’ is a term that refers to seeing with our inner eye or our third eye, instead of with our monkey minds and mundane eyes.

It means seeing with warm feelings and not with cold eyes.
It means that in every situation, we make a choice to perceive whatever it is we want to perceive, by choosing what to focus on.

If our aim is to rise in consciousness, we must learn to see with blessing and loving eyes, instead of with eyes that see what is wrong with the world and what others are doing wrong.

Can we do it in EVERY situation and all the time?
Mmmmm…. I hope so….

The next time I write, it will be from Ladakh, high in the Himalayas.
(Where internet is very iffy)

← And so it begins…. Our Journey To India
Julley from Nurla, Ladakh →