Arriving in Ulaanbaatar, the capital city of Mongolia 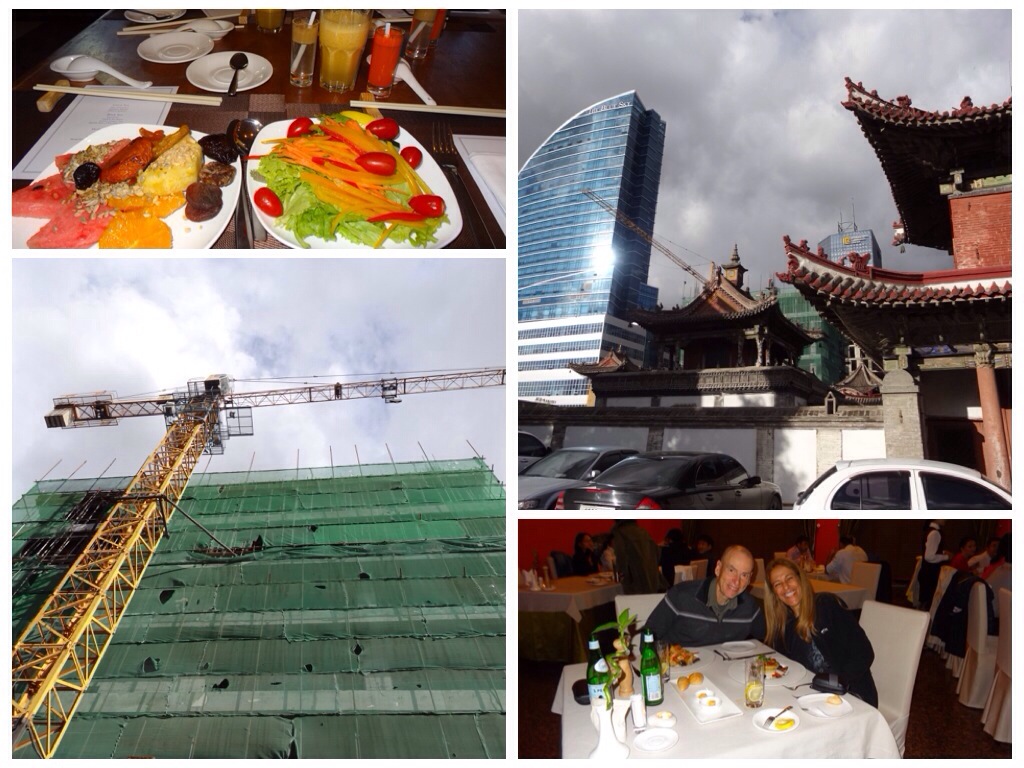 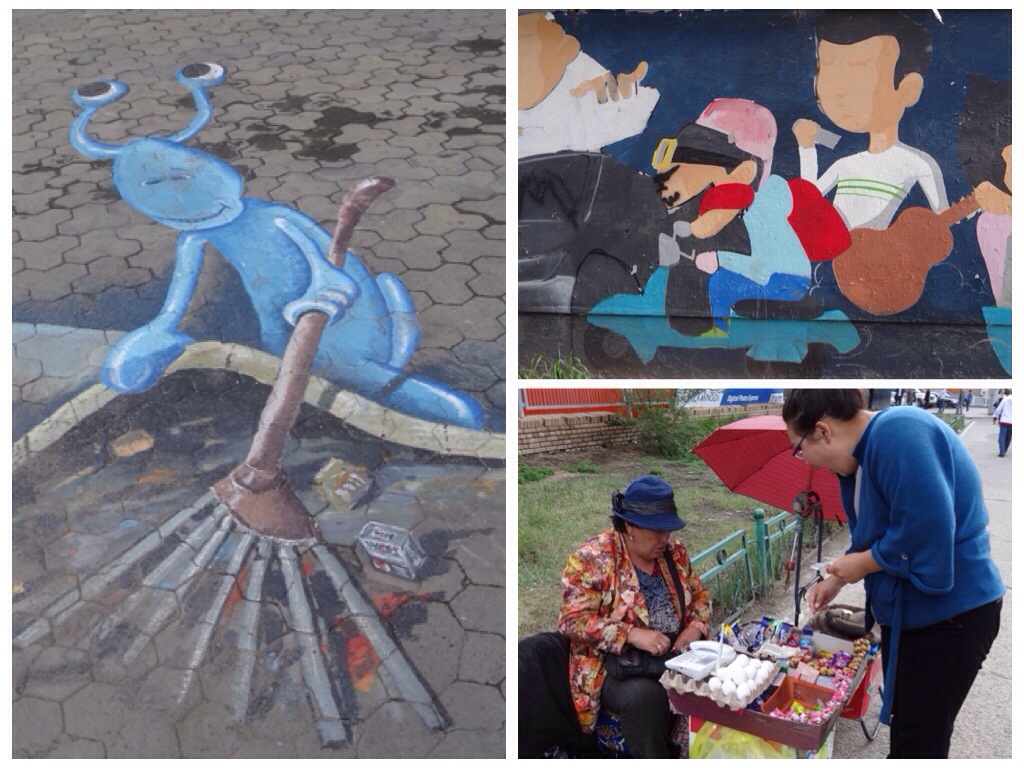 We landed in Ulaanbaatar on a rainy grey evening, the tail end of several wet and stormy days.
It had rained so much in the last few days that the streets and roads of this busy city, which are gridlocked in the best of conditions, were now completely flooded in many places.

Driving in Ulaanbaatar is a task reserved only for the bold or for those who can handle the constant stress, and the flooded roads made driving even more difficult.

Other travelers who had passed quickly through this city, suggested to us that we spend only the minimum amount of time necessary here, just what is absolutely needed to get our trip around Mongolia started.

The city is surrounded by green slopes, but it has become so overbuilt in recent years, that you can hardly see the green horizon beyond the sprawl of city and suburbs, which seems to stretch for miles and miles.

Until recently, Mongolia was a communist country.
This means that all the land was communal, which fit well with the nomadic traditions that have been cherished here for thousands of years.

Depending on the season and the condition of the pastures, all Mongolians can simply set up a Ger camp (yurt) anywhere they want and herd their animals, as well as selling their mares’ fermented milk and other milk products anywhere in the country without prior permission from anyone.

But all this is changing nowadays.
Many Mongolians are not into being nomads any more.
They prefer steady city jobs or government jobs, or they want to set up their own small businesses in the cities, open car dealerships, restaurants, antique shops, grocery shops, etc.

This migration from the open land, and from the wholesome yet demanding nomadic life into the life of the crowded cities, requires that permanent housing be constructed in order to accommodate the many who wish to live in the city or own an apartment.

The main streets of the city already feature many old crumbling apartment buildings, built by the Russians in the 1930’s and 1940’s.
They are easy to spot, since none exceeded four stories in height, since there were no elevators in Ulaanbaatar at that time.
Functionality and low cost were the key words of architecture during the Soviet era.
The old buildings look like airless sardine cans, not fit for human habitation with peeling paint, tiny windows and crumbling balconies.

The human spirit was never meant to live and thrive in small airless apartment blocks, and it is easy to see how squeezing into unwholesome living habitats, leads to anger and frustration in the human soul, and to senseless ambitions and meaningless pursuits.

The new apartment buildings offer better living conditions with indoor plumbing, modern kitchens, big windows and a more efficient heating, but they are priced far too high for most people.

This led the government to draft new land laws.
It was decided to allot each adult citizen the ownership of a pice of land in the suburbs surrounding the city of their origin.

The size of the land allocated to each citizen varies by regions surrounding each city, but it is generally around 0.5 hectares per citizen (about 1.23 acres or 5000 square meters).

This new concept of land being privatized had an unfortunate effect on the landscape of the country and led to a psychological change in the people.

Having lived for many generations with no fences nor boundaries on the open land, the Mongolians now build tall ugly wooden fences around their allotted land, resulting in suburbs that look more like refugee camps or temporary tenements.

Many still erect gers inside their fences, but only because it is the cheapest way to build a home.
They confess that they prefer to have a wooden or brick home with running water and sewer.

In the Ger districts surrounding the cities, it is not permitted to be hooked up to running water.
The law says that only when you build a permanent house inside your fence, do you become entitled to connect to the water main lines.

This means that many residents in the Ger districts use composting outhouses for their toilets, and make twice daily trips to the nearby water wells, to gather water for their drinking, washing and cooking needs.

The streets of the Ger districts are narrow and unpaved, which is not unusual since most roads in Mongolia are unpaved dirt tracks, if they exist at all.
But when it rains, the pathways in the Ger districts become a flood zone, and often huge puddles of muddy water block the entrances to the fenced properties.

While traveling through the rest of the countryside of Mongolia, we felt that the country seem to transcend the concept of time.
The green steppes and the traditional ways of living on the land and herding animals, as done here continually for thousands of years, seemed timeless.

Not so in Ulaanbaatar, the city is fast growing and rapidly changing.
It is today in a transitional phase and it will probably take awhile for it to develop a harmonized identity.
For now, it feels a bit disjointed.
A fancy and extremely high priced international designers mall stands next to small traditional shops where the concept of “window shopping” or attracting customers with aesthetic window displays, is not yet understood.

The old shops are set inside dark building complexes, with nothing but small signs in Mongolian pasted on the windows and doors to alert you as to what you might encounter inside.

The city’s electrical grid is run by three huge coal plants, and subsequently, the air is polluted year round.
It is worst in the wintertime, when more coal is burnt for heating in this northern, snow covered country.

We chose to stay in a five star hotel on Peace Avenue, one of the main avenues of the city.
Comfort does not translate to high prices in Ulaanbaatar, and our comfortable, spacious room at the Kempinski Hotel Khan Palace, came at a reasonable price.

We initially thought about upgrading to a suite, but it was one of those suites which we encountered often in rural China, where a card table complete with vodka stains and cigarette burns dominates the living room.
The whole place reeked of cigarette smoke, a trail of evidence pointing to the many nights people sat smoking and playing cards or ankle bone games deep into the wee hours.

Our hotel sent a uniformed driver to pick us from the airport.
He spoke good English and was holding a glowing iPad with our names on it.

Our hotel room was very comfortable and instead of braving the streets on our first night, tired and hungry, we ate a delicious meal in our hotel’s restaurant.

A head chef from one of the Kempinski hotels in Turkey was in residence under an exchange program, and he made us a dish of roasted artichokes with sun dried tomatoes, black olives and roasted root vegetables.

We also had a carrot ginger soup, a pumpkin soup garnished with coconut milk and a large salad with balsamic dressing.
A Mongolian dish of Tsuivan- handmade noodles with seasonal vegetables which later in rural Mongolia will become our food staple of choice, was prepared well at
the Kempinski and it tasted light, fluffy and very yummy.

Our room was comfortable, the shower was marbled and hot, the air temperatures in late June felt pleasant and we slept like babes in the clean sheets.

Later, at the end of our trip, we would cherish those little comforts all the more, and returning to the Kempinski hotel would feel like real luxury.

← 48 hours in Narita, Japan on our way to Mongolia
The Streets Of Ulaanbaatar, The Choijin Lama Temple, The Zanabazar Museum, The Museum of National History and Vegetarian Food In Ulaanbaatar →

2 Comments on “Arriving in Ulaanbaatar, the capital city of Mongolia”